Three hit songs in the last few months have pushed the same message: You are awesome. You’re awesome just the way you are, even –no, especially– if you don’t fit in.

The three songs are “Firework” by Katy Perry, “Raise Your Glass” by Pink, and “Born this Way” by Lady Gaga. I don’t know who is sending out the talking points for pop singers, but these three divas are on message. A certain style of relentless affirmation is apparently the order of the day. Why? What is the radio saying to us? I’m not sure these songs are worth thinking about, but here are some observations about them.

1. It’s youth ministry. Okay, obviously these songs are not talking to us, if by “us” you mean readers of blogs like this. These artists appeal to a very young audience, giving them a soundtrack for their lives, lives filled with songs their fans can be embarrassed about when they grow up. And the message for the kids is: “Love yourself and you’re set, there’s a spark in you, just ignite the light and let it shine, you’re original, can’t be replaced,” etc. Louder, more positive, LOUDER! 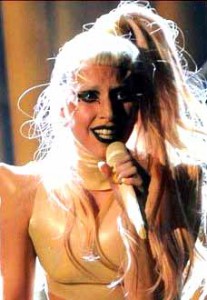 2. But for what religion? It’s clearly not Christianity, or any of the other fusty old faiths. It’s some kind of primal celebration of life itself, some sort of vitalism that requires ecstatic self-affirmation. Pink (excuse me, that’s P!nk) is by far the least articulate of the three, but even she wants to know “what part of party don’t you understand?” Katy Perry might be paraphrasing the book of Esther when she muses, “Maybe the reason why all the doors are closed is so you can open one that leads you to the perfect road… when it’s time you’ll know.” But in the paraphrase is the jump to a different faith, a faith of self-celebrating. “I sing myself and celebrate myself,” said Walt Whitman (who was probably an early prophet of this faith). These singers celebrate themselves by bringing their fans into the circle of self-celebration. “It’s all about you, by which I mean me.”

It makes perfect sense that the priests of this new religion are the celebrities. Their celebrity status is the very thing that shows them to be the elect, the apostles whose message must be heard. In an article entitled “God at the Grammys,” Neil Strauss lines up quote after quote to show that “Before they were famous, many of the biggest pop stars in the world believed that God wanted them to be famous, that this was his plan for them, just as it was his plan for the rest of us not to be famous.”

3. The affirmers are young women. I don’t really know what to make of this, but I can’t think of any male voices who are delivering this message to the young people quite so clearly. Bruno Mars tells his girlfriend “You’re amazing, just the way you are.” –and she apparently needs a lot of affirmation, since according to another Mars song, people are always throwing grenades and blades at her. But he’s talking directly to one person he is romantically in love with, whereas the divas are shouting love-words at a crowd, preacher-style. Of the three young women with the “Yay You” songs, only P!nk is older than 30. They beam affection at their fans from the stage, from P!nk calling her fans “my underdogs” to Gaga’s bizarre mass therapy sessions masquerading as concerts. What exactly is this diva-affirmation? It’s not generalized romance, as if the love crooner were to look up from his girl and say to a surrounding crowd, “You’re ALL amazing, just the way you are.” And though all three divas build their careers on sexiness, it’s a sexiness exactly like porn, which is to say perfectly impersonal. Can you imagine a manly man delivering this message? I suppose we’ll get that sooner or later, but at this stage of cultural development, a male voice would be way too fatherly to carry the message. Only Gaga has dared to gesture in that direction, with her chummy reference to “Capital H-I-M.”

4. It’s a message targeted at misfits. Katy Perry’s song is for those who “feel like a plastic bag,” or “paper thin” or “like a house of cards.” Pink’s song is to people who are underdogs, “wrong in all the right ways,” “nitty gritty dirty little freaks,” “too school for cool, and treated like a fool.” And Lady Gaga sings to “subway kids,” encouraging them to “have no regrets.” But above all, Lady Gaga sings to male homosexuals. The gay element was a sub-text for Perry and P!nk, made explicit only in their videos (which both feature men kissing at crucial moments). But Lady Gaga makes it central, and her whole song is deliberately pitched to be a gay rights anthem (“don’t be a drag, just be a queen”). But “Born this Way” isn’t really about being gay at all. Gaga’s using the cultural cachet of homosexuality to push the religion of self-affirmation. Similar layers of contradiction abound: All three are conspicuously skinny women trying to position themselves as being on the side of obese girls (again, both videos so far feature young women who feel shunned because of their weight; Gaga, on the other hand, dons fleshy-bony shoulder spikes that simulate anorexia); all three are white women celebrating racial diversity at the level of a United Colors of Benneton fashion statement.

5. It’s no good talking about it. Because the ready defense is “OMG, it’s like just a song or whatever, why are you analyzing it?” And also because the whole point for all three singers is to get people to notice them, and the various tricks of all their songs serve only that end. But the message is “You, that is, I, am awesome. Look at me and listen to me.” And when we do, even to shake our heads, we obey. It’s a perfect match between their medium and their message, because they can promote their religion in the very act of promoting themselves. You couldn’t make up a better religion.

This post was originally published in March, 2011.  It was republished as part of Scriptorium Daily’s ten year anniversary.