December is always a strange time of year for Christians at a college. With the end of the semester approaching, it’ a very busy time in the academic calendar when the work can begin to seem unendurable and our energy is almost spent. It’s also Advent, the time in the Church calendar when we’re supposed to celebrate the coming of Jesus.

I got a new idea about the relationship between hard work and celebrating Jesus as I was discussing of the Gospel of Luke with some sophomores in Torrey. The idea came from a strange passage often called the Parable of the Unworthy Servant.Jesus says, “Will any one of you who has a servant plowing or keeping sheep say to him when he has come in from the field, ‘Come at once and recline at table’? Will he not rather say to him, ‘Prepare supper for me, and dress properly, and serve me while I eat and drink, and afterward you will eat and drink’?  Does he thank the servant because he did what was commanded? So you also, when you have done all that you were commanded, say, ‘We are unworthy servants; we have only done what was our duty.’” (Luke 17:7-10)

One student in the discussion said she really didn’t like this passage because it make it sound like no matter how hard we work, it’s never enough and we just need to work harder.

As we discussed it, we saw that although Jesus does indeed say that we can never work enough, the question is “Enough for what?” One answer from the passage is “enough to be worthy” though that raises the further question “worthy of what?” Possible answers from the passage are “worthy to be servants of the master” or “worthy to eat at the table with the master.”

If you imagine a servant saying, “I’ve done my work today so I’ve earned my dinner,” you can start to hear how it strikes the wrong note. Imagine a teenager telling his parents, “I’ve taken out the trash and cleaned my room, so now give me the dinner I’ve earned.” The parents would be right to say, “The reason you’ve had dinners (andbreakfasts and lunches—and a room!) for the last fifteen years has nothing to do with you taking out the trash.” (This is the same false note we hear when Milton’s Eve suggests to Adam that they need to get more work done in the garden lest “the hour of supper…come unearned.”)

Once you see what the servant would have to say to his master, it appears how many people in Luke say similar things to Jesus or God:

Older son: “These many years I have served you, and I never disobeyed your command, yet you never gave me a young goat that I might celebrate with my friends.” (15:29)

All of these people are saying “I’ve been good, I’ve worked hard, surely that counts for something.” There’s a similar voice in Flannery O’Connor’s story “Greenleaf.”  Mrs. May, an old widow managing a farm with little help from her good-for-nothing sons and her lazy farmhands, takes pride in the thought that “before any kind of judgment seat she would be able to say: I’ve worked, I have not wallowed.”

It’s interesting to see how Luke pairs each of these people with someone who’s a better example: Mary, the younger son, the tax collector praying, and in the case of the rich ruler, those who receive the kingdom as children (in the passage before his story) and the blind beggar and Zacchaeus (in the passages just after his story).

The blind beggar calls out to Jesus for mercy, and the tax collector prays, “God be merciful to me a sinner.” What distinguishes these people from the first group is not primarily that they understand how worthless and unworthy they are—it’s that they get God. They understand that God is merciful (“merciful and gracious, slow to anger and abounding in steadfast love” Exodus 34, Psalm 103).

Of those who are coming before God with their good work, Martha seems the most forgivable.  She really is serving Jesus, no doubt at least partly out of sincere love. But think about what she’s saying in light of her situation, the Son of God has come to her house and she’s complains, “It’s not fair; I have to do all the dishes!”

Here is the Christmas message: God, who is rich in mercy, has come to our house. He came into our world and he’s come into each of our lives. And not one of us had done anything to deserve it or make usthe least bit worthy.

But there’s more. Jesus has not only come to our house; he’s invited us to his house to sit at his table. Throughout Luke, we see Jesus sharing a table and breaking bread with the most unlikely table companions, and he presents the good news that he’s come to give as an invitation to a banquet he’s prepared (Luke 14).

In the midst of all the hard work at the end of this semester (much of it commendable service and wearying well-doing that will be rewarded with a good harvest, Gal 6:9), the Christmas message reminds us that none of our work could make us the least bit more worthy of what God has already done for us—what God is doing for us right now. Jesus is among us as one who serves. 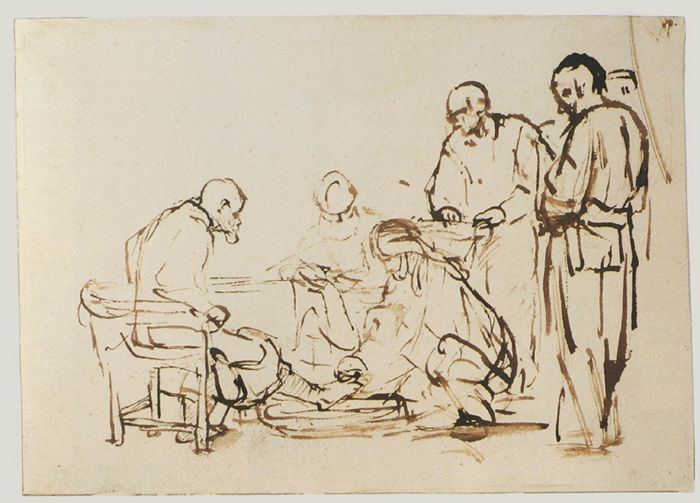