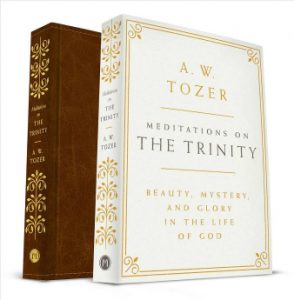 A friend recently gave me a copy of this new devotional book, Meditations on the Trinity: Beauty, Mystery, and Glory in the Life of God, by A.W. Tozer.

A. W. Tozer (1897-1963) wrote a lot of books, but if you’re a fan, you’re probably thinking, “He never wrote a book called Meditations on the Trinity!” And you’re right. This is a book that culls exactly 100 selections on the Father, the Son, and the Holy Spirit from about 25 different A.W. Tozer books, and brings them together in one beautifully-produced volume.

What a broad world to roam in, what a sea to swim in is this God and Father of our Lord Jesus Christ. He is eternal. He antedates time and is wholly independent of it. Time began in Him and will end in Him. To it He pays no tribute and from it He suffers no change.

We can surely know this, at least: that the Incarnation required no compromise of deity. Let us always remember that when God became incarnate there was no compromise on God’s part… He remained ever God and everything else remained not God.The gulf still existed even after Jesus Christ had become man and had dwelt among us.

Because the heart of the Christian life is admittedly faith in a person, Jesus Christ the Lord, it has been relatively easy for some to press this out of all proportion and teach that faith in the person of Christ is all that matters. Who Jesus is matters not, who His Father was, whether Jesus is God or man or both… these things are not important, say the no-creed advocates. …What is overlooked here is that the conflict of Christ with the Pharisees was over the question of who He was. To believe on Christ savingly means to believe the right things about Christ. There is no escaping this.

The Scriptures never represent the persons of the Trinity as opposed to or in disagreement with each other. The Holy Three have ever been and ever will forever be one in essence, in love, in purpose. We have been redeemed not by one person of the Trinity putting Himself against another, but by the three persons working in the ancient and glorious harmony of the Godhead.

On the Holy Spirit:

It would help us if we could remember that the Spirit is Himself God, the very nature of the Godhead subsisting in a form that can impart itself to our consciousness. We know only as much of the other persons of the Trinity as He reveals to us. It is His light upon the face of Christ, which enables us to know Him. It is His light within us, which enables us to understand the Scriptures.

Christianity, the great church, has for centuries lived on the character of God. But in recent times there has been a loss suffered. We’ve suffered the loss of that high concept of God, and the concept of God handled by the average gospel church now is so low as to be unworthy of God and a disgrace to the church. It is by neglect, degenerate error, and spiritual blindness that some are saying God is their ‘pardner’ or ‘the man upstairs.’

God love Himself –the Father loves the Son, the Son loves the Father, and the Son and the Father love the Holy Spirit. They understood this in the olden times, when men were thinkers instead of imitators and they thought within the confines of the Bible.

There are about 300 pages of that sort of stuff in Meditations on the Trinity, and the book is physically designed to be an attractive object: It’s a compact volume in bonded leather, comes in its own box, has a placeholder ribbon, and the pages are printed in two colors (black text with decorative yellow accents and endpapers).

It’s hard to talk about the triune God in easy words and short sentences; it’s hard to keep the ideas clear and simple while speaking about the boundless depths of mystery that we are dealing with in the Father, Son, and Holy Spirit. Tozer had a remarkable talent for keeping things simple without dumbing things down. I admit that not every page in this book is entirely satisfactory to my standards of theological precision (Tozer’s a little fast and loose with some of his Christological distinctions), but all of them are capable of being read charitably if you give Tozer the benefit of the doubt and admit that he’s carrying out a remarkable task remarkably well.

We need more people out there teaching the Trinity in a way that connects to the young, the uneducated, the busy, and the afflicted. Tozer has the perfect tone of voice, and Moody editor Kevin Emmert (though you have to read the very tiny print at the front to find any name but Tozer’s on this book) has done a great service by combing through 25 books to pull together this little beauty.