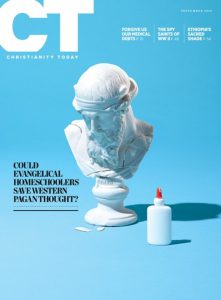 The cover story of the September issue of Christianity Today is about Christian homeschoolers who read classic books by pagan authors. Yay!

It’s kind of a rambling article, but the author (Lou Markos of Houston Baptist University) has some fun with the irony, or at least the surprise, of fundamentalists, or their heirs, being the people most committed to reading Plato and Aristotle (thus they “save western Pagan thought”). The energy of the piece comes from the spin that these seem like the wrong people reading the wrong books.

If you don’t know about the rise and growth of classical, Christian education at the primary and secondary levels, this cover story will serve very well to break the news for you. It’s most definitely a thing. Markos sticks to his homeschooling angle, but as the story widens he includes some charter schools and private schools, and even gestures toward higher ed.

If, on the other hand, you already know about classical, Christian education, especially on the homeschool side of things, this story might serve to connect a few dots for you. Lots of names, institutions, and books are identified, and some connections are traced. Then again, if you’re already involved in the movement, you’re also likely to be struck by some of the omissions from the account given here. I’m sure Classical Conversations wonders why they’re not here, and I bet a number of private schools bristle at the focus on homeschooling (at least Great Hearts does get a shout-out).

Of course, unless you want to turn a story into a mere catalogue of names, not everyone can be included in the story. And the program I teach in did get a mention, so I’m not griping about being left out of the story.

But I do find the story itself a little limited: “It started…in 1947.”

1947 is when Dorothy Sayers wrote “The Lost Tools of Learning,” which Doug Wilson at Logos republished and put into operation in 1981, which led to imitators, which brings us to today. There are more details (Inklings open minds and hearts, evangelicals become Roman Catholic, Dante’s involved somehow, Calvinists lighten up a little, etc. –as I said, it rambles a bit), but that’s the basic plot.

I just want to mention another plot line that, in my opinion, really supplements this one and helps make a lot more sense of what’s going on with Christians reading pagan classics.

It started in 1920. At Columbia University, John Erskine launched a course called General Honors, which put students through a  two-year sequence of 50-60 books, at the rate of about one per week, which they read in English without elaborate historical background or context. These books were to be discussed in a free-flowing, conversational seminar under the guidance of a professor whose job was not to add new material via lecture but to make sure the discussion worked. General Honors at Columbia is where the distinctively American educational movement loosely called the Great Books approach came together. It was designed to give young men of soldiering age a direct and immediate encounter with the elements of the civilization they might have to fight for. Early participants included people like Mortimer Adler, Mark Van Doren, and Jacques Barzun. Elements of General Honors made their way to the University of Chicago, to St. John’s, to Dallas, and beyond.

A lot can be said, pro and con, about the Great Books impulse in American higher education. Books have been written. All I want to point out is that this story, which has a very different arc to it than the Wilson-read-Sayers story, goes a long way toward explaining what’s happening in the circles where Christian students are reading Homer, Plato, Aquinas, Dante, and Shakespeare. There is a Christian appropriation of the American Great Books movement that is producing fascinating new hybrid forms and proving to have real intellectual vigor. Its pedagogical peculiarities have somehow been transmitted into a wide range of settings, and they make a lot of sense of what’s happening even among homeschoolers, especially at the high school level (where by common consent Sayers’ “tools” version of the trivium and quadrivium is less energizing).

And when you turn to higher education, it’s definitely the Great Books story that best accounts for what’s happening. A movement that started with Columbia and Chicago has produced fascinating faith-based varieties of itself (mutations, you might say) and is thriving in places like Thomas Aquinas College and Biola’s Torrey Honors Institute, just to name a couple of California schools.

Read any account of Columbia’s old General Honors, and compare it to the curriculum and pedagogy of Torrey Honors, and you’ll be immediately struck by the similarities. There are of course differences: Torrey has a great quantity of Bible and doctrinal writing in its curriculum; its teachers all sign a statement of faith; theology is everywhere present as the integrating intellectual discipline. But the result is the very thing the CT article is trying to explain: what are these theologically conservative Protestants doing reading Homer and Plato?

We’re seeking goodness, truth, and beauty by reading together in community. And we’ve got some experience at it (“it started in 1996”). It’s a program that’s 23 years old, has 430 students on the ground right now, and has sent out many hundreds of alumni working in every field because they leave here not only with our great books experience but with a university major. We’ve got our share of homeschoolers, but we’ve also got plenty of private and public school grads.

Someday we’ll write up the history of Torrey Honors, in a way that connects a few dots and explains a few things, and makes sense of why evangelical Christians just can’t stop reading Homer and Plato and Augustine and Dante and company. We’ll probably mention Sayers and Lewis and the Inklings, because our founder, John Mark Reynolds, most definitely had read all that and had dreamy visions of Oxford in head. But he also studied Plato with Al Geier, who studied with Leo Strauss, whose time at Columbia and Chicago linked him to one stream of the Great Books tradition. That genealogical argument is mostly symbolic, but it accurately depicts our descent from the university’s Great Books project rather than our ascent from a primary and elementary renaissance.

Then again, if you’re a Christian student who has been trained and formed by that renaissance (homeschool or otherwise), and you’re looking for a university program that takes it to the next level, we are here for you. Come join fellow believers from a wide range of backgrounds and read books nobody else expects you to read, because we are in on the open secret that these are the great books.