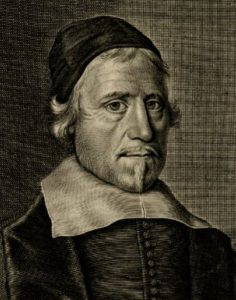 Bishop Edward Reynolds (1599-1676) wrote a long book on a short psalm, An Exposition of the One Hundred and Tenth Psalm. One reason for the book’s length is that Reynolds found in the words of Psalm 110 the entire Christian message. To be more precise, he located in that prophetic Psalm the gospel message of the saving life of Christ, and the participation of believers in that saving life.

To make his point in the opening pages of the book, he spelled out the articles of the creed from the words of the Psalm.

Want to see it? I knew you would.

I have chosen to speak upon this Psalm, and out of it to discover those ways, whereby the life of Christ is dispensed and administered towards his Church. For this Psalm is one of the clearest and most compendious prophecies of the person and offices of Christ in the whole Old Testament, and so full of fundamental truth that I shall not shun to call it “symbolum Davidicum,” the prophet David’s creed.

And indeed there are very few, if any, of the articles of that creed which we all generally profess, which are not either plainly expressed, or, by most evident implication, couched in this little model.

First, The doctrine of the Trinity is in the first words: “The Lord said unto my Lord.” There is ‘Jehovah the Father,’ and ‘my Lord;’ the ‘Son’ and the sanctification or consecration of him, which was by the ‘Holy Ghost;’ by whose fulness he was anointed unto the offices of king and priest; for so our Saviour himself expounds this word ‘said,’ by the sealing and sanctification of him to his office.” (John 10:34-36).

Then we have the ‘incarnation’ of Christ, in the words, “My Lord,” together with his dignity and honour above David, as our Saviour himself expounds it. (Matt 22:42, 45) Mine, that is, my Son [says David] by descent and genealogy after the flesh, and yet my Lord too in regard of a higher sonship.

We have also the sufferings of Christ, in that he was consecrated a priest, verse 4, to offer up himself once for all, and so “to drink of the brook in the way.”

We have his eluctation and conquest over all his enemies and sufferings, his resurrection, “He shall lift up his head:”

his ascension and intercession, “Sit thou on my right hand:”

And in that is comprised his descent into Hell by St Paul’s way of arguing, “That he ascended, what is it but that he descended first into the lower parts of the earth?” (Eph 4:9)

We have a holy catholic church, gathered together by the sceptre of his kingdom and holding in the parts thereof a blessed and beautiful communion of saints; “The Lord shall send forth the rod of thy strength out of Sion; rule thou in the midst of thine enemies. Thy people shall be willing in the day of thy power, in the beauties of holiness: from the womb of the morning, thou hast the dew of thy youth.”

We have the last judgment; “for all his enemies must be put under his feet,” –which is the apostle’s argument to prove the end of all things; and there is the “day of his wrath,” wherein he shall accomplish that judgment over the heathen, and that victory over the kings of the earth, (“who take counsel and bandy themselves against him,”) which he doth here in his Word begin.

We have the resurrection of the body; because he must “subdue all his enemies under his feet,” and the “last enemy to be subdued is death,” as the apostle argues out of this Psalm. (1 Cor 15:25-26)

And lastly, we have life everlasting, in the everlasting merit and virtue of his priesthood; “Thou art a priest for ever after the order of Melchizedek;” and in his “sitting at the right hand of God,” whither he is gone as our forerunner, and to prepare a place for us; and therefore the apostle from his sitting there, and living ever, inferreth the perfection and certainty of our salvation.

The creed’s summary of the life of Christ turns out to be a pretty good tool for finding the depths of this psalm. Reynolds may have handled some of the doctrines a little roughly (dragging out the implicit descent from its concealment within the ascent, with help from Ephesians), but I’m struck by the fact that he didn’t try to forcibly extract things like the doctrine of creation (“maker of heaven and earth”) from it.