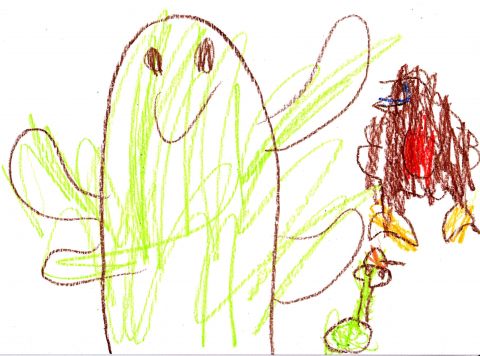 You may think of the desert as an empty or lonely place, but this desert is a HOT SPOT in more ways than one. It not only sustains life, but a thriving community of many species living in harmony. The dominant figure is our host, a saguaro cactus (cereus giganteus) spreading out his four arms hospitably. His spines are not shown here except perhaps by the spikiness of the green coloring.

Representing the animal kingdom is a coiled rattlesnake (viperidae crotalus mitchellii pyrrhus) in a blaze orange baseball cap –he must be going hunting.

And the newest arrival is a big fat American robin (turdus migratorius, sometimes translated, over-literally, “porta-potty”), who may be having a little trouble picking a safe landing spot between the cactus and the rattlesnake. It looks like he’s going for the second branch down on the right, and once he’s landed they can get the party started. Snake on percussion, robin on winds, and the cactus already doing an interpretive dance. This desert is where it’s at.