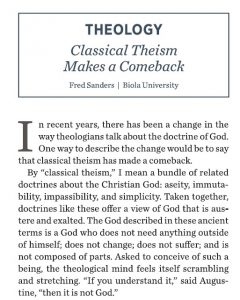 Faithlife (maker of Logos Bible Software) has started a new print journal of theological education: Didaktikos. It’s edited by Douglas Estes; click on through and see how to subscribe.

In the first issue, I wrote a little report (in the “Currents” section) to bring readers up to date on the discussion of classical theism. It’s only a few hundred words, and is designed more as a report than an argument. Here’s the opening:

In recent years, there has been a change in the way theologians talk about the doctrine of God. One way to describe the change would be to say that classical theism has made a comeback.

By “classical theism,” I mean a bundle of related doctrines about the Christian God: aseity, immutability, impassibility, and simplicity. Taken together, doctrines like these offer a view of God that is austere and exalted. The God described in these ancient terms is a God who does not need anything outside of himself; does not change; does not suffer; and is not composed of parts. Asked to conceive of such a being, the theological mind feels itself scrambling and stretching. “If you understand it,” said Augustine, “then it is not God.”

This view is an ancient one, and it did not go by the name “classical theism” until a few decades ago. Sometime after the middle of the twentieth century, a number of related movements in academic theology began to call into question the God of classical theism. Some of the objections were philosophical, and it seems to be philosophers who coined the phrase “classical theism.” But especially among evangelicals, most of the objections had another source. It seemed hard to reconcile this austere and metaphysically severe God with the biblical story. How can God be ontologically above distinctions, change, and suffering, when the Bible is the story of a God who has many distinct attributes, who becomes human and dies on the cross? Under questions like these, seminary education for decades was bedeviled by a variety of revisionist accounts of the doctrine of God.

There was a wide range of alternatives (we are describing a broad trend here, not a particular school of thought), but a generation or two of scholars learned to chalk up a big question mark beside the old ideas that God was not composed of body, parts, or passions.

In recent work, though, there has been a glad embrace of these classic doctrines of divine simplicity, aseity, impassibility, and immutability. First came a few books that confronted the question in their titles: Does God Change? and Does God Suffer? (both by Thomas Weinandy; St. Bede’s, 1985, and T&T Clark, 200, respectively). A steady stream of book chapters and journal articles began mounting defenses of what had seemed for some time indefensible.

Then came the masterful synthesis of recent trends by Kevin Vanhoozer, Remythologizing Theology (Cambridge University Press, 2010), which engaged directly in dialogue with the various revisionist, non-classical theisms of recent decades. Vanhoozer’s book is demanding, but serves well as a report of what the most important recent work on the doctrine of God has said, and also as a constructive doctrinal account on its own.

From there I recommend, almost at random, more recent books that illustrate the trend: Dolezal (All That is in God), Jones (God Is), and Wellum (God the Son Incarnate). Click through to read the brief report, or head over to the Didaktikos home page to subscribe. There is a lot of good stuff in this promising first (November 2017) issue.