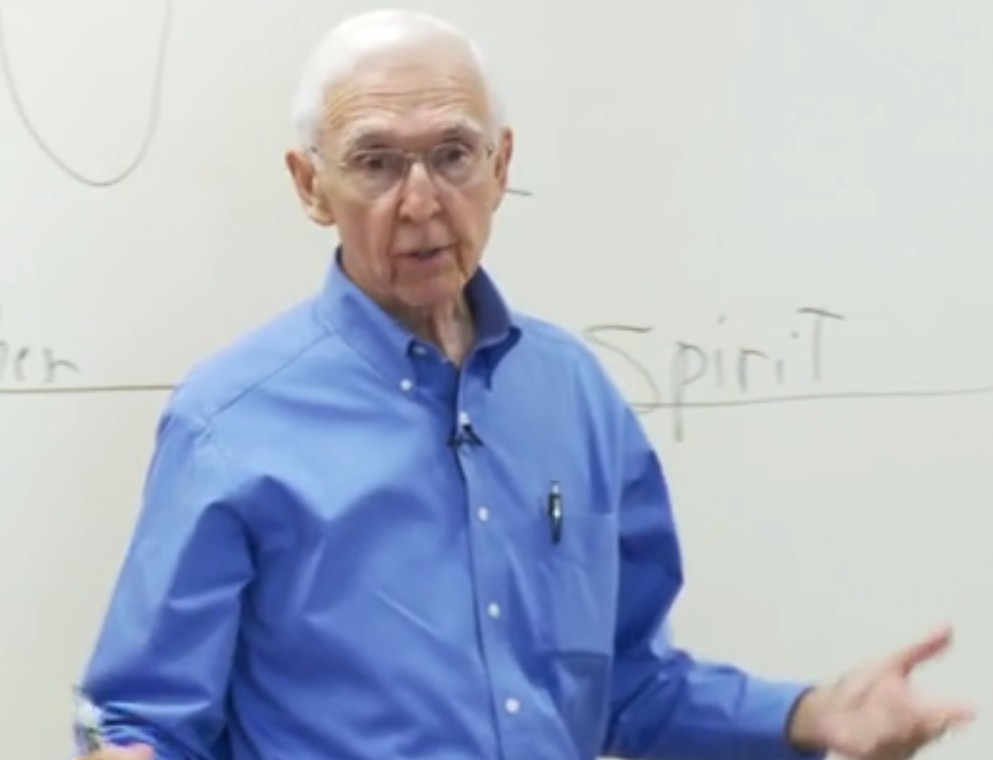 Robert Saucy (1930-2015) taught systematic theology for 54 years at Biola University’s Talbot School of Theology. If you doubled Bob’s length of service, you’d have the number 108, which is one year older than Biola itself. Bob began teaching at Talbot in 1961, when the graduate School of Theology was less than a decade old.

Just by dint of longevity, Bob would be in the running for most important theologian in the history of Biola. But when you take into consideration his publications, his influence in evangelicalism, his constant dialogue and collaboration with colleagues as the university grew around him, his role in shepherding Biola’s theological development over these decades, and, above all, the scope and range of his theological vision, Bob’s not just in the running for most important theologian at Biola: he’s unopposed in the race. Only Biola’s founders could be said to have exerted similar influence, or perhaps Charles Feinberg (at Talbot from 1948-1970).

I only have a few Bob Saucy stories, so I’ll point you elsewhere for more insightful tributes from people who knew him better. Instead, I’d like to post a couple of thoughts on what his theology has meant to me.

First, since I’m a theologian and a Christian in the broadly dispensationalist tradition, I found Bob Saucy’s version of progressive dispensationalism to be crucial. I had tweaked and trimmed my own commitment to various inherited dispensational notions during graduate school, but mostly working by instinct and never focusing my full attention on the system as such. So I was delighted to find Bob’s 1993 book The Case for Progressive Dispensationalism, in which he showed that he had thought things through with appropriate focus and earnestness. Sub-titled (rather unpromisingly, I think) “The Interface Between Dispensational and Non-Dispensational Theology,” the book is partly a report on the growing dialogue and consensus among the kind of conservative evangelicals who like to draw timelines of biblical history and then argue about them, and partly a constructive theological project by a fine mind that habitually circled around a set of important biblical motifs.

As Bob summarized the situation circa 1993,

Anybody who goes from the Scofield Bible and Larkin charts to graduate work in biblical and theological studies has some bits of glitchy exegesis to overcome. But Bob’s keen eye was on the larger dynamics of the biblical story, the long line of the Bible’s narrative arc. Everywhere old-school dispensationalism drew a sharp distinction, Bob was able to grant the validity of the insight while setting it back in a more comprehensive context. Out went the two-purposes-of-God schema; down came the prophetic parentheses; in came a grasp of progressive revelation that respected the order and proportions of the full canon, left to right. The Israel-Church distinction is still in place, and a literal millennium with Christ’s return preceding it. But Bob had nudged the whole stream of thought back into the mainstream of classic theology, “largely in the direction of greater continuity” between Old and New Testaments, and of greater continuity with the central Christian theological tradition.

It’s dispensational, I sighed in relief, but not weird.

I know there were fights and I’m glad I wasn’t around for them, but some of the peace dividends for evangelical cooperation have been tallied up in Russell Moore’s 2004 The Kingdom of Christ. And Bob was never in the business of brokering doctrinal deals just for the sake of pragmatic outcomes. He was always driven by Bible study and a concern for truth: he genuinely wanted to know how to interpret Psalm 110:1 correctly, and to say the right thing about David’s throne and Christ’s reign.

And that raises the second major thing Bob Saucy’s theology has meant to me. Progressive dispensationalism’s intense focus on the promises of the prophets, and the differentiated way those promises are fulfilled by the coming of Christ and the Spirit, is a source of great insight into the theological center of Scripture. I won’t dig into the details, because accounts of such things tend toward prolixity and sprawl. But the main thing is the main thing here: In the fullness of time, God the Father sent Christ and the Spirit.

In Bob Saucy’s progressive dispensationalism, the accent fell on the not-yet-fulfilled promises, and the futurist aspect of the eschatology. But there’s no missing the way Christ and the Spirit are bundled, or coordinated, or interwoven in his account of the church: “The church subsists in the New Testament work of Christ’s first coming and the bestowal of the Spirit.” Or “the church is a spiritual organism alive with the resurrection life of Christ through the presence of the Spirit.” Bob’s clear understanding of the centrality of Christ and the Spirit to biblical theology is what kept his theology centered; the coordination of their work (Christ’s present reign is spiritual, that is, by the Spirit, while his millennial reign will be personal, that is, by his own presence) is what gave his theology its edge. These “two hands of the Father,” as Irenaeus called the Son and the Spirit,  did all the work in Bob’s theology. In fact, reading progressive dispensationalism as Bob Saucy practiced it was enough to make you believe that this is a theological framework more in continuity with Irenaeus than with Darby.

The presence of the trinitarian persons in salvation history has long been called “the economic Trinity.” The term is jargony but has a good pedigree: in Ephesians 1:10, Paul says that God has an oikonomia, an economy, for the fullness of time: to unite all things in Christ. The Greek word is untranslatably rich, and it contains etymologically the idea of the distribution of goods in a wisely-ordered household (oikos). The ESV translates it simply as “plan;” the New American Standard (on the committee of which Bob Saucy served) renders it “administration.” But the KJV had “the dispensation of the fullness of times,” perhaps influenced in the choice of that English word by the Vulgate’s  “dispensationem plenitudinis temporum.”

So this big plan of God’s is an economy, a dispensation of the fullness of times, in which the Father accomplishes redemption in the Son and applies it in the Spirit. The economic Trinity is the dispensational Trinity. And whether we say that in Greek-derived words or Latin-derived words, the point is clear: God the Trinity is here for us and our salvation in the sending of the Son and the Spirit.