This Christmas, a friend gave me an old book. It’s a pocket-sized catechism printed in 1818. Its original cover is missing, but somebody has lovingly hand-stitched a decorative long-grain paper cover to it. It measures 3.5 x 6 inches, and is 75 pages long.

It is The Evangelical Primer, compiled by Rev. Joseph Emerson. Here’s a look at some interior pages: 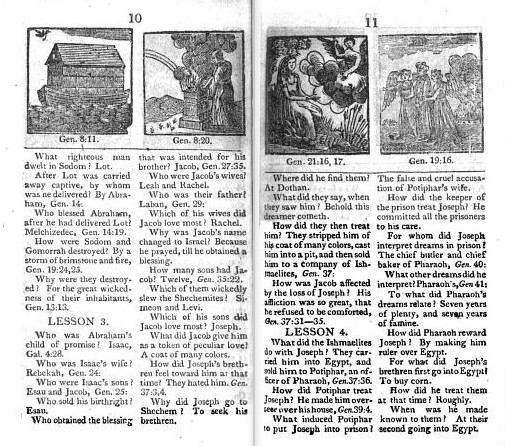 Those little images are about one and a quarter inches square, and there are 72 of them in the book.

Who was this Joseph Emerson? He was an American Congregationalist pastor who lived from 1777 to 1833. He graduated from Harvard in 1789, the year of the ratification of the U.S. Constitution. He pastored in Beverley, MA for 13 years, and was twice a widower (his third wife managed to outlive him). His church published an official institutional history which has many good things to say about him as a pastor. That history notes that “as a student, he was diligent almost beyond the bounds of prudence, and the rapidity with which he multiplied plans for the moral and intellectual improvement of mankind is a sufficient evidence of the activity of his mind.” Most of his plans “for the moral and intellectual improvement of mankind” revolved around better education for women. One history calls him “the morning star of improved female education in New England.” His educational ideals were fairly high, but he crusaded against what he considered an overly-classical approach that would require modern people to learn dead languages. After all, this is the eighteenth century and a New World! Many more details about Emerson’s life and labors can be found in his biography.

The Evangelical Primer was his most popular work, and it apparently was a bestseller in early America. The first edition was published in 1812, and my copy is from 1818. It sold for 12 and a half cents in 1818, or “a dollar 20 cents a dozen, 4 dollars a half hundred, and 7 dollars 75 cents a hundred.” I’m not sure what the Kindle edition went for.

Emerson published several other things, including a Poetical Reader. But he poured a great deal of labor into his catechism. He is said to have transcribed the main part of it 9 times by hand before being satisfied that it was ready for printing.

The Primer has the following parts:

A “Minor Doctrinal Catechism” that runs three pages. It begins “Who Made You?” and has about 45 un-numbered questions in which heaven and hell loom large. I don’t know this catechism from any older source; perhaps it originated with Emerson?

A “Minor Historical Catechism” that presents 46 lessons of about 12 questions each, in 36 pages. These questions and answers summarize the main events and ideas of the Bible. They are mostly straightforward factual questions, such as “Where was the law given?” (Answer: “At Mount Sinai.”) But here is an atypically theological page from the final lesson: 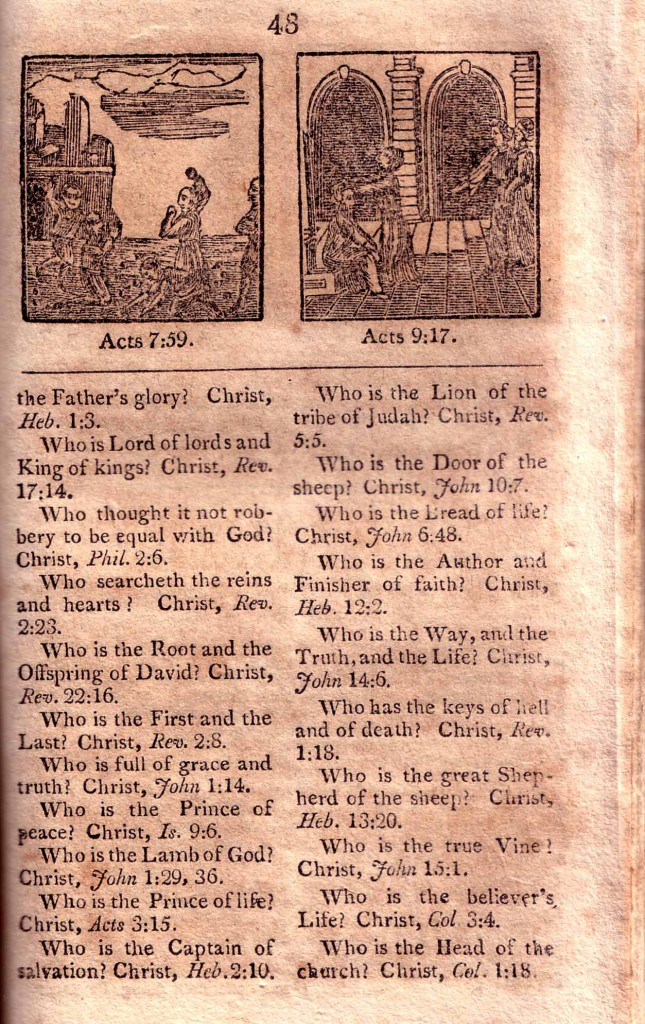 Kids who are thinking, “Oh good, the answer is always Jesus in Lesson 46” will no doubt be disappointed to learn that they must also provide the book, chapter, and verse reference.

Next is the Shorter Westminster Catechism (“What is the chief end of man?”), accompanied by “short explanatory notes and copious scripture proofs and illustrations.” This takes up 23 pages, and the “short explanatory notes” are really excellent. For example, if “chief end” is not luminously clear to you, Emerson clarifies: “That which ought be man’s chief aim and design, and which he should seek, as his chief happiness.” And what about glorifying God and enjoying him forever, what is that? “To do him honor, as the most glorious and excellent Being,” and “to rejoice in his presence and his love.” And the Scripture references provided are apt.

The final section is ten “Select Hymns” which are peculiarly chosen. The only great one is “Christ the Lord is Risen Today,” and among the clunkers is a melodramatic piece called “The Dying Marianne” (“Ah! Why this long and lingering pain?” etc.)

All in all, Emerson’s Evangelical Primer is a great tool. It was designed to be portable, useful, and complete enough to cover the bases. It’s sort of a portable colonial Awana and Westminster catechizing all rolled into one. The easy parts are “Q: Who made you? A: God” and the hard parts are some pretty sophisticated cross-referencing. The itty bitty postage-stamp sized illustrations add interest without being distracting. And the paper and printing are good enough to have brought my copy to me after almost 200 years, in pretty good shape.

Brought to you by Scriptorium Daily, your online source for two-century-old book reviews.