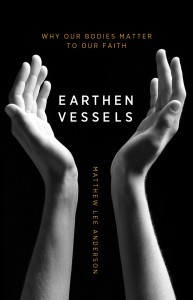 But then Earthen Vessels is interesting because it’s not just a string of provocations and observations about all those issues. It’s actually a book of Pauline theology. In fact, as I was re-reading the book recently it occurred to me that all the hot topics are almost a ruse to get the reader to think through some good old-fashioned biblical theology. Some superficial reviewers have missed the unity of the book, getting their attention snagged on the sequence of hot topics. But if you think it’s a string of trendy topics, you miss the other book that’s going on underneath.

It was chapter ten, “Spiritual Disciplines: The Body Shaped by Grace and Gratitude,” that got my attention. I’ve read a lot of stuff about spiritual disciplines, and much of it is about the body. To be honest, I find most writing about spirituality and the body pretty boring. Most of it makes one point: the body is like soooo important. I’m on board with that, but I’m always wishing for a little more content. Many authors write as if they’ve delivered all the goods once they’ve said the magic word embodiment in hushed tones of reverential (but earthy!) awe. They seem to think they’re done just about the time I hoped they were getting started. But Anderson keeps going, and his chapter on spiritual disciplines is helpfully specific.

“Evangelical spirituality, which is shaped in response to the good news that our salvation has been purchased for us, is inescapably mundane,” he says, playing off of the word mundus, earth. “It takes our position in the world seriously, and the body as our connection with it.” As he works through the idea of living in the world in response to God’s grace, Anderson focuses on a couple of passages from Paul which specifically refer to the parts of the human body, especially Romans 6:

In other words, chapter ten of Earthen Vessels is, yes, the spiritual disciplines chapter. But more importantly, it’s the resurrection chapter. It’s the instructions for how to live a life characterized by receiving life on the other side of death. That’s the right place to talk about the (somewhat trendy, at least in its jargon) subject of spiritual disciplines.

Once again, what we’ve got here is Paul’s theology of Christian experience, but undercover. Looking back to chapter nine, the reader realizes that what looked like a chapter about vampires and cremation was really the chapter on crucifixion; and here in chapter ten which looks like the yoga (or anti-yoga) chapter we have the resurrection chapter.

Wait, why talk about yoga? Because the kind of things Anderson wants to say about presenting the members of our bodies sound like this:

The body’s habits, its unreflective responses to the world, need to be reformed according to the gospel of grace…. opening our bodies and their members to the empowering presence of the Holy Spirit, the Lord and giver of life. Cultivating a holy attentiveness is an act of worship, an ordered response in gratitude for the grace of God in Jesus Christ.

And he even offers some helpful discussion of thinking about your fingers, your toes, the control of the glances of the eyes, and the tension in the forehead. His tips are merely suggestive rather than comprehensive, because he’s not trying to write a how-to manual.

And with language about “holy attentiveness” to the parts of the body, Anderson knows he’s saying things that you hear in your local evangelical-populated yoga studio. Anderson flirts with recent yoga controversy, but eventually says that yoga’s no big deal if it’s just exercise. Go ahead, get in touch with your toes. Literally. But the more theologically meaningful your yoga is, the worse it is.

That’s because the place for theologically meaningful awareness of the body is already taken, for evangelicals, by the shape of the life of Christ. And not just imitating Christ in the sense of choosing an inspirational historical figure and acting like him. Being shaped by Christ means being shaped by grace and gratitude for the salvation he gives by his death and resurrection. There are traditional spiritual disciplines which teach us to pattern our lives after the death-and-resurrection pattern of the deliverance Christ brings. Anderson picks out four: Consuming Scripture, fasting, prayer, and silence/solitude. His discussion of each of these is clear and thought-provoking.

But don’t miss the fact that these disciplines are introduced here for one specific purpose: to portray a pattern of Christian existence that follows the death-and-resurrection pattern of salvation. In a theme that runs through the whole book, Anderson warns that “our transformation is not a technique. We do not sculpt ourselves into the image of Christ.”

It’s tempting to say there are two books here in Earthen Vessels; one being the string of attention-getting topical discussions and the other being the underlying Pauline theology of Christian existence. But that would suggest that the book is disunified, or undigested, or schizoid. I think the two levels of Earthen Vessels go together perfectly well. Keep your eye on the Pauline structure, and you’ll see where a whole host of topics fall right into place to demonstrate Anderson’s thesis.