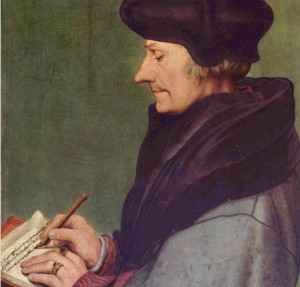 Erasmus of Rotterdam taught the Renaissance world how to take a thought and expand it, expound it, extrapolate it into a fountain of new expressions and novel turns of phrase. His “abundant style” bore much fruit for the students who learned it from him. But the most fruitful use to which Erasmus himself put his powers of expression was probably his series of paraphrases of the New Testament, which were enormously popular in the sixteenth century. Written in Latin, they were early translated into English and became required reading especially in the reforming churches of England.

Just a taste here: the first two verses of Ephesians, elaborately developed into a page or two of theology and morals, by Erasmus:

I, Paul, the ambassador not of Moses nor of any man but of Jesus Christ in whose interest I act, an ambassador, moreover, not as a result of usurping the office myself, nor by human appointment, but by the authority and bidding of God the Father who, through his Son, bade me be the herald of the gospel teaching among the gentiles.

As such, I am writing this Epistle to all who live at Ephesus, and who live in such a way that they are zealous to keep themselves clear of this world’s foul vices, and that with a sincere heart they believe in the gospel of Jesus Christ, while they hope for the reward of innocence and holiness from no source other than from the model they have chosen, and await the culmination of their happiness from none other than the source from which it began.

Meanwhile I desire for you not what is generally desired by the people who measure their happiness by the security this world provides, but I desire that God may daily increase in you the kindness by which he has gratuitously freed you from the offences of your former life and changed wicked people into cultivators of innocence and justice, for he is the author of all good things, whom now we too are able to call ‘our Father,’ not only for the reason that we were created by him, but much more because, grafted onto the body of Christ, we have been co-opted into the rights and privileges of sons. May he guard the harmony of your relationship so that you may be of one mind with each other.

Once and for all you have been reconciled to God; may you be on your guard, lest by sinning again you shatter the covenant entered with him, entered indeed through Jesus Christ his Son, through whom and with whom he bestows all things on us.

Deservedly shall we henceforth call him our Lord after he has rescued us from the tyranny of the devil at the price of his most sacred blood, has claimed us for himself, and has received us, emancipated from servitude to the devil, into his own jurisdiction.

Happy servitude by which we are firmly bonded to Christ!