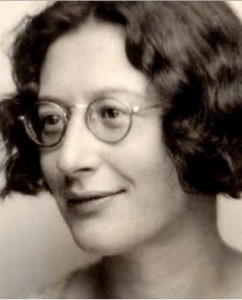 I love to argue with Simone Weil (1909-1943)’s essay “Reflections on the Right Use of School Studies with a View to the Love of God.”

Then again, I love to argue with Simone Weil. Her writings always have something in them that catches me and lures me in –but then I find that I can’t stand to stay very long in Weil-space.

Flannery O’Connor called Weil  “a mystery that should keep us all humble.” I have to admit I’m encouraged that O’Connor’s encounters with Weil’s books seemed to run parallel to mine: “Weil still intrigues me while much of what she writes, naturally, is ridiculous to me.” Perhaps someday I’ll have the chance to read Weil more carefully, and come to understand how the parts all fit together, if they do. In the meantime, I occasionally conduct little raids on her writings, and come away enriched.

Weil (I’m pretty sure the name is to be pronounced “vay,” but don’t let your teeth, tongue, or lips contact each other at any point while saying it, and mon dieu! don’t hang up too much on that “ay” sound) wrote this essay in 1942, and sent it to a Dominican abbot who was responsible for teaching children. It can be found in the collection Waiting on God.

Weil’s big idea is prayer as attention, or perhaps attention as prayer. The proper human response to the presence of God is to attend, to open up in receptivity, not slackly but with a truly drastic alertness. Weil championed a particularly intense kind of active receptivity. In this essay, she applies it to schoolwork. In fact, she says, “The Key to a Christian conception of studies is the realisation that prayer consists of attention,” and “the development of the faculty of attention forms the real object and almost the sole interest of studies.”

When a young person –she has the young in mind– is working away at geometry or a language, the question is bound to arise: what is this good for? Standard answers include “it builds character,” “it builds mental muscle,” or “it’ll come in handy later.” Weil’s answer is more radical. She claims that building up the power of attention is already an exercise of the capacity for prayer. “Even if our efforts of attention seem for years to be producing no result, one day a light which is in exact proportion to them will flood the soul.”

So get to work. And if you’re a believer, get to work for the right reason:

Students must therefore work without any wish to gain good marks, to pass examinations, to win school successes; without any reference to their natural abilities and tastes; applying themselves equally to all their tasks, with the idea that each one will help to form in them the habit of that attention which is the substance of prayer.

When we set out to do a piece of work, it is necessary to wish to do it correctly, because such a wish is indispensable if there is to be true effort. Underlying this immediate objective, however, our deep purpose should aim solely at increasing the power of attention with a view to prayer; as, when we write, we draw the shape of the letter on paper, not with a view to the shape, but with a view to the idea we want to express. To make this the sole and exclusive purpose of our studies is the first condition to be observed if we are to put them to the right use.

Weil has famously high standards; her writings go about as far as we can expect anybody to go toward combining the earnestness of existentialism with the idealism of platonism. So when she says to attend to your schoolwork, and describes it as a kind of mystical communion with math and grammar, she’s serious. Nor does she mean that “attention which is the substance of prayer” is something you attain in the higher, creative reaches of your work. The chance for growth is right there at the lowest levels.

It’s especially in the making and correcting of mistakes that attention is honed. Weil is a positive glutton for this kind of punishment: we should

take great pains to examine squarely and to contemplate attentively and slowly each school task in which we have failed, seeing how unpleasing and second-rate it is, without seeking any excuse or overlooking any mistake or any of our tutor’s corrections, trying to get down to the origin of each fault. There is a great temptation to do the opposite, to give a sideways glance at the corrected exercise if it is bad, and to hide it forthwith.

Why should we give such careful scrutiny to our errors?

Above all it is thus that we can acquire the virtue of humility, and that is a far more precious treasure than all academic progress. From this point of view it is perhaps even more useful to contemplate our stupidity than our sin. Consciousness of sin gives us the feeling that we are evil, and a kind of pride sometimes finds a place in it. When we force ourselves to fix the gaze, not only of our eyes but of our souls, upon a school exercise that we have failed through sheer stupidity, a sense of our mediocrity is borne in upon us with irresistible evidence.

No knowledge is more to be desired. If we can arrive at knowing this truth with all our souls we shall be well established on the right foundation.

You can probably imagine that my running argument, or puzzlement, with Weil kicks in around here: whatever she is getting at with “a kind of pride” coming along with our “consciousness of sin” is beyond me. Possibly she thinks of sin as a kind of hubris or titanism, such that only a giant among men would dare to take the noble name of sinner. Nevertheless, I’m drawn to her claim that for developing a certain kind of humility, “it is perhaps even more useful to contemplate our stupidity than our sin.” Weil really recommends rubbing your nose in your factual, geometrical, and declensional mistakes. Think you’re so smart? Then how come you blew it?

The solution, as always, is attention. Go back to the mistake, note it, and see the right way forward. This is hard work, but not grit-your-teeth and bear-down-on-it hard work: that would be manual labor. Schoolwork is different:

Will power, the kind that, if need be, makes us set our teeth and endure suffering, is the principal weapon of the apprentice engaged in manual work. But contrary to the usual belief, it has practically no place in study. The intelligence can only be led by desire. For there to be desire, there must be pleasure and joy in the work. The intelligence only grows and bears fruit in joy. The joy of learning is as indispensable in study as breathing is in running. Where it is lacking there are no real students, but only poor caricatures of apprentices who, at the end of their apprenticeship, will not even have a trade.

Or, as she says later, “Twenty minutes of concentrated, untired attention is infinitely better than three hours of the kind of frowning application which leads us to say with a sense of duty done: ‘I have worked well!'”

Weil also has a very interesting phenomenological account of attention. She emphasizes the way the act of attention is an act of waiting for something to manifest itself clearly. For this to happen, some kind of suppression of other known things has to take effect:

Attention consists of suspending our thought, leaving it detached, empty and ready to be penetrated by the object. It means holding in our minds, within reach of this thought, but on a lower level and not in contact with it, the diverse knowledge we have acquired which we are forced to make use of. Our thought should be in relation to all particular and already formulated thoughts as a man on a mountain who, as he looks forward, sees also below him, without actually looking at them, a great many forests and plains. Above all our thought should be empty, waiting, not seeking anything, but ready to receive in its naked truth the object which is to penetrate it.

Remember, we’re not talking about high-level mystical ascents here (mountaintop imagery notwithstanding). We’re talking about doing math and grammar correctly. Errors in these school subjects arise from failing to wait, with full attention and focus, for the truth to show itself. Instead of waiting, we grasp at the first notion that comes along:

All wrong translations, all absurdities in geometry problems, all clumsiness of style and all faulty connection of ideas in compositions and essays, all such things are due to the fact that thought has seized upon some idea too hastily and being thus prematurely blocked, is not open to the truth. The cause is always that we have wanted to be too active; we have wanted to carry out a search.

The more you learn to call off  “a search” and wait for truth’s self-manifestation, the more you are doing the thing that just is prayer, or that pays off in prayer in an exact proportion.

This is strange stuff, but I’m convinced there’s something in it. My to-do list includes the someday task, “write a sober and defensible version of that Weil essay on schoolwork,” leaving out the weird bits and attempting greater clarity. But sober, defensible, and clear is not what you go to Weil for. Here’s her last word on the subject:

Happy then are those who pass their adolescence and youth in developing this power of attention. No doubt they are no nearer to goodness than their brothers working in fields and factories. They are near in a different way. Peasants and workmen possess a nearness to God of incomparable savour which is found in the depths of poverty, in the absence of social consideration and in the endurance of long drawn-out sufferings. If however we consider the occupation in themselves, studies are nearer to God because of the attention which is their soul.

Whoever goes through years of study without developing this attention within himself has lost a great treasure.