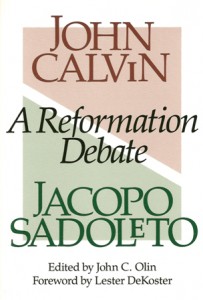 Justification is by grace alone through faith alone. It’s a wonderful truth, established by Paul,  classically recovered and emphasized by the Reformers. But as the Reformers learned in the sixteenth century, and as Protestants ought always to keep in mind when teaching this great doctrine, it is open to unhelpful mis-interpretation by those who would affirm it, and to uncharitable mis-representation by those who reject it. We ought, therefore, to teach justification through faith vigorously, but also carefully, and with certain safeguards creatively deployed.

A justifying faith that has no connection to good works is the danger so perennial that we ought to know to keep our eyes open for it. Wise teachers have found numerous ways to kill this beast.  Luther certainly emphasized faith, but warded off misunderstanding by saying “it is a living, busy, active, mighty thing, this faith. And so it is impossible for it not to do good works incessantly.” Later Protestants would say “we are saved by faith alone, but not by a faith that is alone,” since faith is never in fact alone.

John Calvin once used a particularly good argument in a public exchange with a particularly good opponent. His 1589 response to a letter from Cardinal Jacopo Sadoleto (and Sadoleto’s original letter itself) ought to be mandatory reading for anybody seeking an understanding of how educated Catholics and Protestants understood what was at stake.

Here is how he puts it:

We deny that good works have any share in justification, but we claim full authority for them in the lives of the righteous. For if he who has obtained justification possesses Christ, and at the same time Christ never is where his Spirit is not, it is obvious that gratuitous righteousness is necessarily connected with regeneration. Therefore, if you would duly understand how inseparable faith and works are, look to Christ, who, as the apostle teaches (1 Cor 1:30), has been given to us for justification and for sanctification. Wherever, therefore, that righteousness of faith which we maintain to be gratuitous is, there too Christ is; and where Christ is, there too is the Spirit of holiness who regenerates the soul to newness of life. On the contrary, where zeal for integrity and holiness is not in force, there neither the Spirit of Christ nor Christ himself are present. Wherever Christ is not, there is no righteousness, and indeed no faith; for faith cannot lay hold of Christ for righteousness without the Spirit of sanctification.

In the next paragraph, Calvin connects the christological and pneumatological argument to the love and election of God the Father, making the trinitarian argument complete.

This trinitarian argument has not escaped the notice of Michael Reeves, whose book Delighting in the Trinity makes the point concisely:

One of Sadoleto’s arguments against the message of the Reformation was that, if it is preached that God saves people by his grace alone, people will be given no reason to want holiness. After all, if my holiness does not contribute in any way to my getting saved, why should I bother? I’ve got ‘grace’, after all. It was a powerful jab to Calvin’s theological head, but the Reformer replied with a knockout blow: that Sadoleto had fundamentally misunderstood salvation, as if it was something other than being brought to know, love and so want to please a beautifully holy God. For Calvin, salvation was not about getting some thing called “grace” –it was about freely receiving the Spirit, and so the Father and the Son.

I agree that in the polemical context of the exchange between Calvin and Sadoleto this was indeed a jab to the head met by a knockout blow. But if you don’t like pugilistic imagery, or if you’d like to isolate the theological and spiritual point from its polemical framing, you could put it this way: The unity of the Trinity’s work in salvation entails the unity of justification through faith and Spirit-empowered sanctification. Faith and good works go together because Christ and the Spirit go together on the mission of the Father. You can’t have, you don’t have, nobody has ever had, one without the other.