O tell us, poet, what you do. –I praise.
Yes, but the deadly and the monstrous phase,
how do you take it, how resist? –I praise.
But the anonymous, the nameless maze,
how summon it, how call it, poet? –I praise.
What right is yours, in all these varied ways,
under a thousand masks yet true? –I praise.
And why do stillnesss and the roaring blaze,
both star and storm acknowledge you? –because I praise. 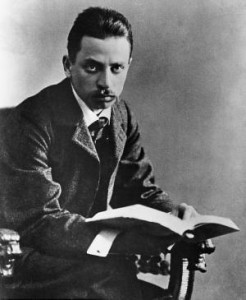 Rainer Maria Rilke (1875-1926) wrote some uncannily moving poems. The Duino Elegies are perhaps the greatest for meditative study, but he also wrote some hit singles like the gem above. It’s a vindication of the task of poetry, with an interrogator asking a sharp series of questions, to which the poet always gives the same, simple answer. “Ich rühme,” he says in Rilke’s original German, “I praise” or “I celebrate.”  It’s interesting that the skeptic is so searching and eloquent in line after line, and the poet just stonewalls.

He praises. It only takes a little reading in Rilke to realize that he uses Christian vocabulary with not-Christian goals in mind. Sometimes I’ve found that indirection helpful for provoking new thoughts and ideas: Rilke talks about angels in his poems, but he soon makes it clear that these are not the angels of the Bible. When he imagines calling out to an angel, he fears that if it hears him, he will be crushed by its “stronger existence.” Why? “For beauty is nothing but the beginning of terror we can just barely endure and we admire it so because it calmly disdains to destroy us. Every angel is terrible.” Rilke’s angels, several critics point out, are at best the angels of the Qur’an, they are jinns, they are more power than person.

So when Rilke says that it is through praise that he rises to the challenge of “the deadly and monstrous… the nameless and the anonymous” (in the original German of this poem the adjectives do all  the real work; disregard the nouns here), “praise” is a response to things, not to God. At least not to God as you’re probably thinking of  him. Rilke praises things at hand, starkly and beautifully, and if he transcends them at all, it is into some sheerly formal transcendence. Probably death, but with Rilke, who knows? He is one of those artists who consistently raises better questions than he can answer.

Micah Mattix just wrote a very insightful review of some posthumous Rilke writings. I haven’t read the book he’s reviewing, but I really enjoyed his attempt to make a few sharp distinctions and clarifications:

It’s fair to say that the German poet Rainer Maria Rilke was bedeviled by God, or what the poet called God. In “Improvisations of the Caprisian Winter” (1906-07), God is a mountain, Rilke writes, in which “I climb / and descend all alone and lose the way.” In another early, uncollected poem (1909), he addresses God as “you, whom I cannot take hold of now, anywhere.”

I think I’ve been guilty of reading too much actual theism, even Christian meaning, into some of Rilke’s work. Mattix gives good reasons for more caution on this front.