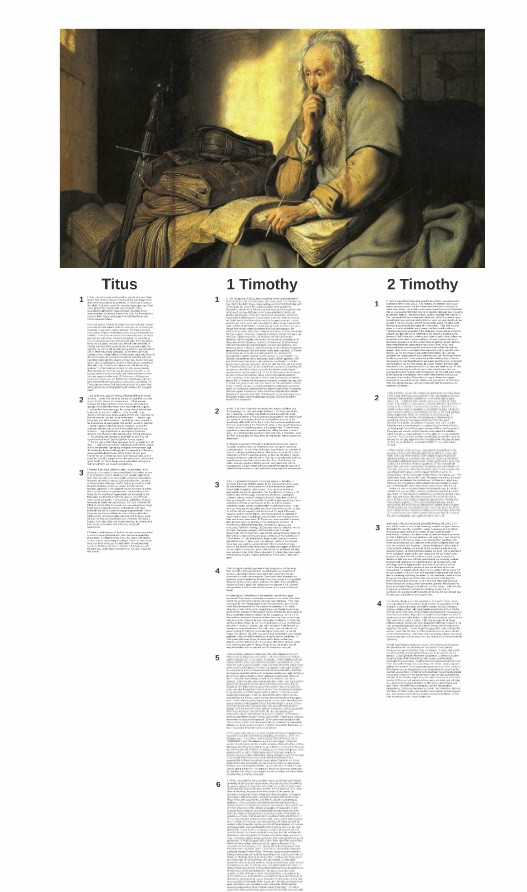 I’m cleaning off my desk from another semester of teaching at Los Angeles Bible Training School (the best Bible Institute in Los Angeles), putting some books back on the shelf and returning others to the library. Here are some quick thoughts on the commentaries that proved most helpful to me this semester.

Don’t confuse this with a comprehensive list, and don’t imagine that I’ve read widely enough to say with authority which commentaries are actually best in the field. Check out bestcommentaries.com for a more systematic ranking, sortable by style and purpose. These are just the books that proved themselves to me in the rush of a busy semester as I prepped lectures, often at the last minute, for a class on the pastorals at a Bible Institute. I would describe the academic pitch of the teaching as congregational-level teaching plus homework. These are highly motivated students (a Monday night class that ends at 9:30pm!) with a wide range of academic preparation.

Assigned Text: John Stott’s Message of 1 Timothy & Titus. I’ve come to love Stott’s “message of” commentaries, having used them for classes on Romans (amazingly helpful) and the Letters of John (considerably weaker). He knows when to dive a little deeper into a subject, when to bring in just the right amount of background or context, and when to gloss over something to keep the main point clear. His theological judgment is, with a couple of fairly well known exceptions, quite sound. Where Stott excels all other expositors is in breaking the material down into a clear outline, with units of thought flowing smoothly for teaching or preaching. He usually makes these divisions with deep insight, and even when he forces things a little bit, it’s obvious that he’s doing so to deliver the best possible learning experience. I’m conscious of having become almost overly dependent on Stott outlines for teaching: even though I didn’t require students to buy his Message of 2 Timothy (published separately, it would have meant requiring two textbooks for a single Bible institute course, which is rude), I still used it so I could follow his divisions.

Philip Towner, Letters to Timothy and Titus in the NICNT.  This is my main jumbo commentary (almost 900 pages), the only one after Stott that I made sure to read in its entirety on each passage before preparing the lecture. It’s the one I read quickly to get a reliable report on the state of scholarship and key issues on a passage to make sure I wasn’t missing anything, and then to dig in deeper where needed. Towner is wonderfully committed to expounding the close connection between doctrine and ethics in the pastorals, and the running argument of this commentary carries out the program argued monographically in his earlier book The Goal of Our Instruction: The Structure of Theology and Ethics in the Pastoral Epistles. Several things follow from this commitment: Towner respects the doctrinal passages in their own right more than some commentators have, perceives much thematic unity and some careful structure in the letters, is alert to how the author transforms a basically Hellenistic moral vocabulary for Christian usage, and thinks Paul is that author (though Towner canvasses alternatives and often writes in a way that would render this commentary equally helpful for readers who deny Pauline authorship).

I. Howard Marshall, The Pastoral Epistles in the ICC.  An excellent volume, detailed and rigorous, Marshall’s ICC Pastoral Epistles is a running commentary on the Greek text. Perhaps the elderly Marshall’s temperament is a good match for the elderly Paul’s: Paulus senex  doesn’t engage in close combat with his opponents, warning that genealogies and mythologies are endless and fruitless. Marshall senex, without ever being quite dismissive of dissenting views, sometimes makes his points so deftly and concisely that you can practically hear him grumbling “ain’t nobody got time for that.” Without bothering to offer much justification for doing so, Marshall comments on Titus first, and only then turns to Timothy (“by reading the letters in this order we shall rescue Titus from being read, as it tends to be, in the shadow of 1 Timothy and given less attention in its own right than it deserves”). I decided to structure my class the same way, and am glad I did. It meant I had to do all the detailed word studies of the pastorals’ distinctive vocabulary (eusebeia, epiphaneia, soter, paideuo, etc.) along the way to expounding Titus, which resulted in a very powerful emphasizing of the theology of Titus, especially its two golden doctrinal sections. Marshall says in the intro that he, like Towner, is traditional or conservative enough to be “more inclined to question some of the things readily taken for granted by scholars trained in less traditional schools,” and his goal in this commentary is “to find an understanding of the origin of the letters which will do justice to their closeness to Paul while recognizing the difficulties in attributing them to his pen.” The result is what I like to think of as a new, weird Paul, who is the same man as the author of the undisputed Paulines, but who has given us a whole new way of writing and thinking in these letters. Such a Paul is a gift to anyone tempted to think they’ve got Paul figured out.

Dibelius and Conzelmann, Pastoral Epistles in the Hermeneia series. I can’t help thinking of these as the bad guys, but that doesn’t make the commentary worthless. For one thing, how clarifyingly forthright Dibelius was! (Conzelmann updated and revised the work after Dibelius’ death; I think of Dibelius (1883-1947) as the main author but am not sure how to apportion the credit). Here is the classic statement of the view that whoever wrote these documents and put Paul’s name on them was not only bad at imitating his writing style, but even worse at reproducing his theology. Instead of the revolutionary and apocalyptic theology of Paul, the pastorals represent bürgerlichen Christentum, bourgeois Christianity. The dead giveaway is the moralizing Hellenistic vocabulary, the dreaded household codes with their hierarchical order, the Frühkatholizismus (early or incipient Catholicism) that sets in after “eschatological expectation has diminished” and apostolic ministry is reduced to giving advice about how to fit in to Roman society and culture without making waves. Sigh. It is good to have it all laid out here in cold print. Anybody at risk of catching a mild case of the anti-pastorals virus can see a full-blown case of it here and guess at the prognosis. But Dibelius/Conzelmann has another, more straightforward virtue: the copious parallels from Greco-Roman literature are well chosen and conveniently displayed. Ganz wissenschaftlich, y’all! Very high quality work, well worth consulting.

Ancient Commentators: Because we didn’t buy Stott on 2 Timothy, I didn’t have any commentary reading to assign on those weeks. So I handed out about ten pages each of the following pre-modern commentaries: Chrysostom on chapter 2, Aquinas on chapter 3, and Calvin on chapter 4. There is no better way of meeting great theologians of the past than to gather around Scripture with them. Student reaction was mixed, but I had a great time. For a very stimulating and wide-ranging study of the history of the influence of the pastorals, check out Jay Twomey’s The Pastoral Epistles through the Centuries.

A few miscellaneous resources: I can’t read Czeslaus Spicq’s massive French commentary on the pastoral epistles, though all the other commentaries say it’s a marvel of philological investigation. But I did read his book The Trinity and Our Moral Life, which is saturated with what he learned from the pastorals. Also, late in the game, I discovered that much instruction can be had from his Theological Lexicon of the New Testament.

Thomas Constable’s notes on the Bible are really valuable for this level of teaching. A mine of resources from other commentaries, freely available in multiple formats.

Ray Van Neste’s blog, pastoralepistles.com, is an excellent example of how to do academic blogging right.

Entrusted with the Gospel: Paul’s Theology in the Pastoral Epistles, edited by Köstenberger and Wilder, is a very good collection of essays from B&H.

W. Hay M. H. Aitken wrote a book in 1879 called The School of Grace: Expository Thoughts on Titus 2:11-14 (London: JF Shaw and Co),  which I had to interlibrary loan and which turned out not to be as good as I’d anticipated it would be (Stott quoted some of the best lines from it). But it’s almost 400 pages on these four verses, and it creeps lovingly along this amazing passage:

For the grace of God has appeared, bringing salvation for all people, training us to renounce ungodliness and worldly passions, and to live self-controlled, upright, and godly lives in the present age, waiting for our blessed hope, the appearing of the glory of our great God and Savior Jesus Christ, who gave himself for us to redeem us from all lawlessness and to purify for himself a people for his own possession who are zealous for good works.

This was the first passage that I assigned for my students to commit to memory, and knowing it by heart has paid dividends all semester. Every word holds some revelation, or perhaps I should say in more pastorals language, an epiphany.