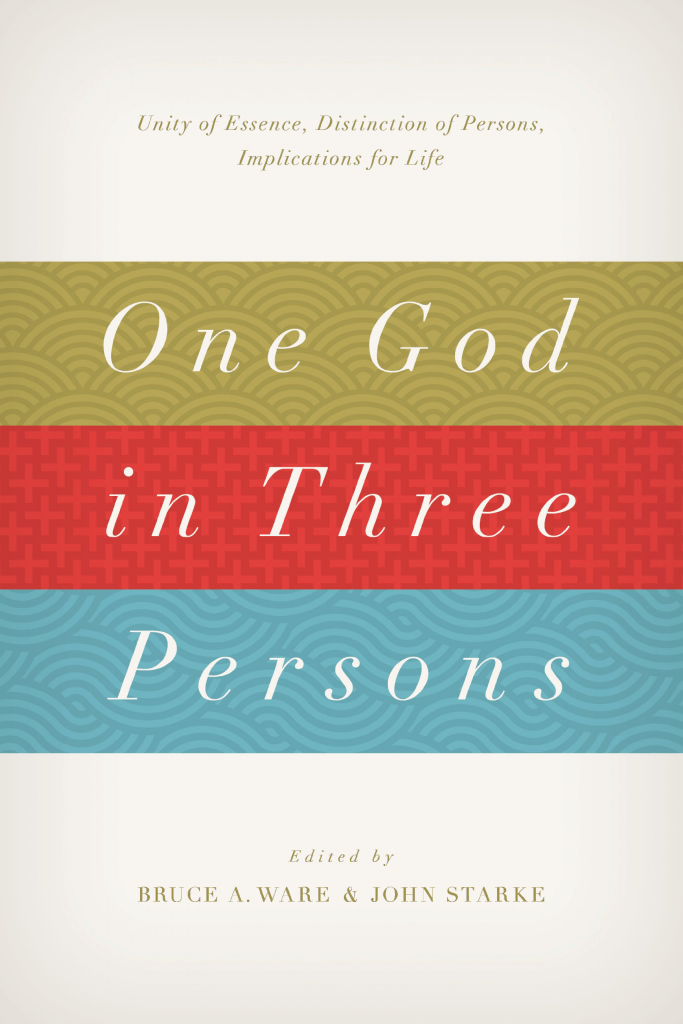 There are several different things going on at the same time in the new book One God in Three Persons: Unity of Essence, Distinction of Persons, Implications for Life, (Crossway, 2015) edited by Bruce Ware and John Starke. It’s got a lot going on just because it’s a set of eleven essays by professors in the fields of biblical studies, biblical theology, church history, systematic theology, and apologetics, plus solid work by scholars outside of academia proper, in publishing and the pastorate. Pointing to that wide scope of disciplines, the editors promise “a comprehensive approach” (14) to a recent debate. But I think it’s a comprehensive approach in another sense, and that’s why I say there are several different things going on between the covers of this book.

The first thing going on is the latest installment in “a debate among evangelicals concerning how the persons of our Trinitarian God relate to one another,” with this volume arguing for the view that “the human obedience of Christ has a basis in the eternal Son of God” (11), that “when we understand the relationship of the eternal Father and Son as one of authority and submission, we rightly think  God’s thoughts after him,” (15) and that this has “strong implications for human relations” (13), especially for Christian marriage.

To that end, the first chapter is Wayne Grudem’s exposé of “Doctrinal Deviations in Evangelical-Feminist Arguments about the Trinity,” which extends his earlier work on the subject. And the final chapter is Bruce Ware’s inquiry, “Does Affirming an Eternal Authority-Submission Relationship in the Trinity Entail a Denial of Homoousios: A Response to Millard Erickson and Tom McCall.” These two essays frame the book, and if Grudem’s takes the form of surrejoinders to surrejoinders to his published arguments, Ware’s takes the form of defeaters to defeaters to a case he’s made elsewhere.

So far, it’s an Eternal Functional Subordination sandwich, though Ware holds out the term “eternal relational authority-submission” (ERAS) as a more precise name for at least his view.

But somewhere between the first fifty pages and the last dozen, the other thing I mentioned is going on. A number of these essays advance their arguments in ways that are not simply extensions of the lines established by the Grudem-Ware trajectory of the debate so far. Instead, they appeal to categories that I don’t think we’ve seen before among the complementarians who have participated in this debate.

For example, Kyle Claunch’s chapter, “God is the Head of Christ,” asks the question (as its subtitle), “Does 1 Corinthians 11:3 Ground Gender Complementarity in the Immanent Trinity?” His answer is that it does so only indirectly: Paul’s statement that “God is the head of Christ” is “a direct reference to the economic reality of Christ’s incarnation,” (82) but has implications about the immanent Trinity that can be seen through the more general “analogical correspondence” of economic to immanent. It would be “too strong” to say that “the Son submits eternally to the will of the Father,” (91) for various reasons. The most important reason is that the only way to get to “submission” language is by going first to “begetting” language:

According to the pro-Nicene Trinitarian grammar that dominated Western reflection on the doctrine of the Trinity for centuries, the three persons of the Godhead are eternally differentiated form one another in terms of relationships of origin. The unbegotten  Father eternally generates the Son, and the Father and the Son eternally spirate the Holy Spirit… the eternal relationships of origin, which differentiate the three persons in the immanent being of God, entail a fixed and irreversible order in the one eternal and indivisible divine essence. (89-90)

This fixed order of relations, this Trinitarian taxis of origins, “provides a tool for thinking about how the authority and submission between Father and Son in the incarnate state might find analogical correspondence to the immanent Trinity.” (90)

So Claunch affirms that “the basic contention of most gender complementarians that gender relationships reflect something about the very being of God is correct,” (93) but it’s only correct, in his view, because of the eternal generation of the Son and an analogical correspondence of the economic Trinity to the immanent. That’s a very different move, Claunch notes, from Grudem who “indicates that the eternal functional subordination in role is the only means by which Father, Son, and Spirit are distinguished eternally.” (89) If Grudem affirms eternal submission instead of eternal generation, Claunch affirms eternal submission because of eternal generation. This is a big difference.

When he recontextualizes the complementarian conclusion into a new conceptual schema (the pro-Nicene theology recovered by scholars like Lewis Ayres), Claunch notes another adjustment that becomes necessary: eternal submission “seems to entail a commitment to three distinct wills in the immanent Trinity,” which

does run counter to the pro-Nicene tradition, as well as the medieval, Reformation, and post-Reformation Reformed traditions that grew from it. According to traditional Trinitarian theology, the will is predicated of the one undivided divine essence so that there is only one divine will in the immanent Trinity. (88)

So the thesis of the book is maintained, but (in this case) only by shifting over to a robust affirmation of eternal relations of origin, one divine will in the Trinity rather than three (not a very social trinitarianism), and a spacious analogical interval between how the incarnate Jesus relates to the Father and how the eternal Son relates to the eternal Father.

That’s what I would call “a comprehensive approach” to the question of “how the persons of our Trinitarian God relate to one another.” And it is very different from the approaches of Grudem and Ware.

And Claunch is not alone in arguing from such a different basis. Michael Ovey’s chapter, “True Sonship –Where Dignity and Submission Meet: A Fourth Century Discussion,” argues that it is “not necessarily Arian to assert that the eternal relationship of the Father and the Son is one of superordination and submission respectively.” (128) But he leans heavily on the pro-Nicene Hilary of Poitiers, which means he promotes eternal relations of origin to a place logically prior to, and in fact forming the only possible ground for, a relation of submission. “Just as begottenness entails the Son’s full deity, so it also entails subjection.” (150) Contra egalitarian flattenings of the Trinity in the fourth or the twenty-first century, Ovey recalls that “the Trinitarian persons are not ‘three brothers,’ or ‘three friends.'” (152) But again, Ovey gets submission by getting generation first: “filial submission is a natural consequence of true sonship,” and true sonship comes from coming from.

John Starke, working with Augustine’s conceptualities, necessarily makes the same move: “eternal generation is the ground of an irreversible order of operations: a noncompetitive order of initiating authority and receptive submission between the Father and the Son.” (171) Starke’s thesis in this essay is pretty narrow: he is defending the rights of complementarians to appeal to Augustine on these matters. He thinks that even with “Ware’s and Grudem’s rejection of eternal generation” (162) they don’t fundamentally misread Augustine, and Starke himself seems to be opting for Augustine’s own conceptual tools: eternal relations of origin, inseparable operations of the Trinity ad extra, and the rest of the pro-Nicene package. His complaint against Augustine interpreters like Keith Johnson seems to be that they won’t allow the extension of the argument to eternal submission. But what’s clearly eternal is generation which grounds sonship; and on this view that true sonship is what includes the narrower and derivative category of submission.

If this book is packaged as an Eternal Functional Subordination sandwich, it’s the meat between the Grudem and Ware bread slices that’s the big surprise. Like a Narnian stable or a Tardis, this book is considerably bigger on the inside than on the outside. What’s eternal, and essential to the divine being, is Sonship, which means eternal generation and the filial generatedness that it entails. Is the obedience of the Son’s will to the Father’s commanding authority also eternal? That seems to me to be a fairly small question, and also one that needs an answer so nuanced it’s practically a change of subject.

There is, in the relations of origin of the triune God, an irreversible taxis to which the obedience of the incarnate Christ corresponds in human form. It’s an eternal procession that reaches its strangely logical final conclusion in the sending of the Son. As for his submission to the Father, I don’t know what they call it in the happy land of the Trinity, but when it lives among us it is rightly named obedience.