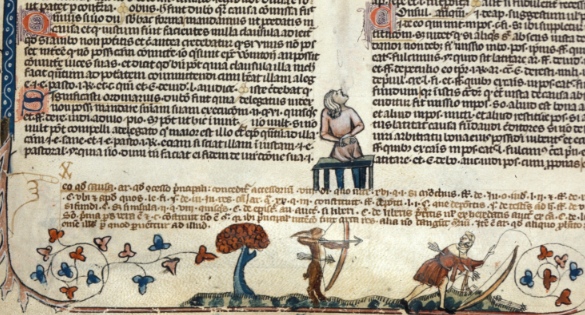 The Commentary on the Sentences of Petrus Lombardus, by Giles of Viterbo.

Giles of Viterbo (1469-1532) was the most active and creative theologians who tried to bring together two worlds: the Renaissance and its call to return to the sources of classical antiquity, and the medieval scholastic tradition. Nothing brings out this creative syncretic work than the newly published Commentary on the Sentences of Petrus Lombardus.

Peter Lombard’s Sentences, consisting in commentaries on Scripture, patristic sources, Pseudo-Dionysus, and Aristotle, was the primary text upon which many university schoolmen tried to cut their teeth. Lombard’s Sentences, along with the Bible, Pseudo-Dionysus and Aristotle, ranks among the most cited sources in St. Thomas Aquinas’ Summa Theologiae. But if Erasmus of Rotterdam’s judgment about the University of Paris being a place of “stale eggs and stale theology” is any indication, by the time of Giles’ birth we are dealing with a tradition that had perceptibly been ossified. Some humanists like Erasmus would do away with the whole scholastic project altogether and return to a more rhetorical style of theology evident in the patristic writings of St. Augustine and St. Ambrose. Others, like Giles of Viterbo, while holding firmly to the Renaissance call for a more pure rhetorical style, sought to bring sources used in scholastic theological reflection like Lombard’s Sentences into harmony with humanist classical style and Platonic philosophy.

Daniel Nodes has put together a critical edition of the Commentary which places the text within the larger framework of Renaissance humanist attempts not only to recapture the ancient rhetorical style of Cicero and the patristic tradition, but also to show how some humanist theologians like Giles tried to bring medieval theological sources like the Sentences into harmony with Platonic philosophical reflection, as well as bringing in classical pagan myths to illustrate those theological truths. His introductory chapter highlights those features of Giles’ work that reflect concerns about such theological issues as the relationship between intellect and will. While St. Thomas Aquinas privileged the intellect for its ability to bring the soul to a contemplation of the divine essence, which is its end, Giles, true to his Augustinian tradition, privileges the will, since it is what sets the soul in motion towards union with the beatific vision. True to his classical humanist worldview, he derives from classical Greco-Roman myths to illustrate what the soul’s union with the beatific vision looks like, which Peter Lombard, and much less St. Augustine, would never have done.

Nodes uses the word “syncretist” to describe Giles’ integrative work, which could be misleading, since Giles is not trying to fuse together several different forms of beliefs and practices—i.e. pagan and Christian—into one system of belief. His focus is always to highlight the exclusive claims of Christianity over all forms of belief and practice, but he will see in the pagan systems a prefiguring of the Christian message and mystery. Nodes cites C.J. de Vogel’s taxonomy of the historical relationship Christians had had with Platonism, ranging from “total rejection” to “far going acceptance joined with transformation.” (p. 20). Nodes puts Giles in the last category, citing Giles’ own opinion of Plato as “a philosopher who indeed approached so very closely to divine matters (qui quidem adeo divinis proprius accedit), so delights in them, so takes our side, that it no longer seems that it should be said about Philo that ‘either Philo is speaking like Plato,’ but ‘either Plato is speaking like a Christian,’ or more truly, ‘is speaking like Moses.’” (p. 21)

“Syncretism,” then, if defined as an amalgamation of several belief systems into one package, does not seem to describe accurately Giles’ project. If, however, what Nodes means by “syncretism” is a harmonization of philosophical and mythical traditions with the Christian mystery, so that they are seen to bear witness to Christian revelation, then this captures the nature of Giles’ work much more accurately. Nodes says as much when he states that “Giles would likely have seen his work as one of finding Augustine’s psychological reflections in De Trinitate and the mystical meditations of the Confessions deep within the texts of Homer, Plato, and Vergil.” (p. 17) Giles is to be seen, then, as a harmonizer who takes the best of classical antiquity and makes it work for Christianity. Whereas St. Thomas Aquinas three centuries before harmonizes what was known of Aristotle with the Sentences, so Giles harmonizes Plato, Homer and Vergil with the same theological source. The issue is one of theological method, and it is quite interesting to see how Giles attempts to look at the seminal medieval scholastic text and interpret it in the mode of humanist rhetorical style.

Nodes has produced a very valuable critical edition of Giles’ Commentary, one which will be a standard for all scholars interested in theology and humanist strategies of patristic and classical rhetoric in the sixteenth century. As he notes, many Catholic scholars have ignored Giles because, as Martin Luther’s superior in the Augustinian order, he often bore the brunt of responsibility for not helping to keep the reformist energies disciplined within the order. This assessment, many are coming to find, is unfair. Now his true place in Renaissance theological discourse is being appreciated, as it should be, and Nodes has produced an edition that will serve scholars for the foreseeable future. The challenge now is for someone to build on what Nodes has done and produce a critical translation.