Ever since I was a boy, they have been part of my life (of course, in those days, they were simply known as regular, run-of-the-mill barber shops). My father would take me to a Cuban barber who had a faint resemblance to Floyd, the barber in the “Andy Griffiths Show.” 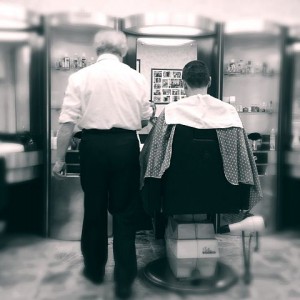 There is a comfortable feeling I get whenever I walk into these corners of men’s tonsorial establishments. The smell of hair tonics, Pinaud Clubman Aftershave, West Indies Bay Rum Hair and Scalp, and Barbicide all combine to give a nostalgic at-home feeling.

After the untimely death of my barber of sixteen years, the late, much-lamented Dave Machavi, his family rented out the space to a hair stylist with a ring on his nose and hair that tilted a bit sideways, and the day I appeared at the door, the place was completely transformed. Gone were the vintage chairs, posters and smells that made Dave’s shop such a delight to go have my ears lowered. Instead, the place had been completely transformed into an avante-garde beauty parlor, with a lady being worked on by this young man with a unique sense of style. He told me I needed an appointment, or to return in half-an-hour.

Well, that left me wandering to look for an alternative tonsorial joint.

In my wanderings, I noticed a small hole in the wall I have passed by many times, but never quite noticed before. It was called “Nelson’s Barber Shop,” and it seemed to have all the appointments of a traditional hair-shearing place, so I parked my car, and walked in.

I was not disappointed.

The first thing that hit my olfactory senses was the smell of West Indies Bay Rum all-purpose after-shave, hair-and-scalp, after-bath lotion. If any smell shouts out “masculinity,” it would be that lotion, and there was a good redolence of it filling the air.

The barbers were all Mexicans, so Spanish was the dominant language of the day, which suited me fine, given my Cuban heritage.

As I sat to wait my turn, I was immediately assigned to a kindly elderly chap from Sinaloa, Mexico whom I will call “Agustin.”

Agustin sat me down on the old-fashioned barber seat and we started on a bit of small-talk, mostly introductions, and after asking me how I wanted my ears lowered, there was a bit of silence thereafter, maybe for five minutes. Then he asked me what I did for a living.

It’s quite difficult to describe my job in the Torrey Honors Institute, so I simply told him that I was a medieval historian teaching history, philosophy and literature. I seemed to have caught his attention when he heard me say I taught literature, because he then asked me if I have ever read and taught poetry. This is not a question you hear barbers ask every day, so now he had my attention. I said that yes, there was some poetry that formed part of the curriculum, especially those of the major English poets. “Like Shakepeare’s sonnets?” he asked. “Yes, but we do mostly his plays,” I replied, gratifyingly surprised at his answer.

This was one barber you don’t run into very often.

He explained that when growing up in Sinaloa, his family did not have much by way of material wealth, but it was a home filled with music and poetry. He loved to go to the local library and read as many books he could get his hands on: Homer, Cervantes, and a few Latin American poets.

He especially loved poetry. He said the lyrical tone of his favorite poets, such as Pablo Neruda and Jose Luis Borges, moved him. He had memorized a few.

Here is a sample of the poetry he recited to me as he was cutting my hair. For the benefit of our readership, I will give present them here in English translation.

The Art of Poetry, by Jorge Luis Borges:

To gaze at a river made of time and water
and remember Time is another river.
To know we stray like a river
and our faces vanish like water.

To feel that waking is another dream
that dreams of not dreaming and that the death
we fear in our bones is the death
that every night we call a dream.

To see in every day and year a symbol
of all the days of man and his years,
and convert the outrage of the years
into a music, a sound, and a symbol.

To see in death a dream, in the sunset
a golden sadness such is poetry,
humble and immortal, poetry,
returning, like dawn and the sunset.

Sometimes at evening there’s a face
that sees us from the deeps of a mirror.
Art must be that sort of mirror,
disclosing to each of us his face.

They say Ulysses, wearied of wonders,
wept with love on seeing Ithaca,
humble and green. Art is that Ithaca,
a green eternity, not wonders.

Art is endless like a river flowing,
passing, yet remaining, a mirror to the same
inconstant Heraclitus, who is the same
and yet another, like the river flowing.

Canto XII from the Heights of Macchu Pichu, by Pablo Neruda:

Arise to birth with me, my brother

Give me your hand out of the depths
sown by your sorrows.
You will not return from these stone fastnesses.
You will not emerge from subterranean time.
Your rasping voice will not come back,
nor your pierced eyes rise from their sockets.
Look at me from the depths of the earth,
tiller of fields, weaver, reticent shepherd,
groom of totemic guanacos,
mason high on your treacherous scaffolding,
iceman of Andean tears,
jeweler with crushed fingers,
farmer anxious among his seedlings,
potter wasted among his clays—
bring to the cup of this new life
your ancient buried sorrows.
Show me your blood and your furrow;
say to me: here I was scourged
because a gem was dull or because the earth
failed to give up in time its tithe of corn or stone.
Point out to me the rock on which you stumbled,
the wood they used to crucify your body.
Strike the old flints
to kindle ancient lamps, light up the whips
glued to your wounds throughout the centuries
and light the axes gleaming with your blood.
I come to speak for your dead mouths.
Throughout the earth
let dead lips congregate,
out of the depths spin this long night to me
as if I rode at anchor here with you.
And tell me everything, tell chain by chain,
and link by link, and step by step;
sharpen the knives you kept hidden away,
thrust them into my breast, into my hands,
like a torrent of sunbursts,
an Amazon of buried jaguars,
and leave me cry: hours, days and years,
blind ages, stellar centuries.

And give me silence, give me water, hope.

Give me the struggle, the iron, the volcanoes.

Come quickly to my veins and to my mouth.

Song of Autumn in the Springtime, by Ruben Dario:

My heart’s celestial histories,
So countless were, could not be told.-
She was a tender child, in this
World of affliction manifold.

She seemed a dawn of pure delight;
She smiled as the flowers after rain;
Her tresses were like to the night
Fashioned of darknesses and pain.

I was timid and childlike shy.
I could not but have been this way:
She, to my love chaste as the sky,
Was Herodias and Salomé…

Songs of Autumn in Springtime, by Ruben Dario:

The other was more sensitive,
More quieting and loving-kind,
With greater will to love and live
Than I ever had hoped to find.

For with her grace of tenderness
A violence of love she had:
In a peplos of loveliness
Was hid a Maenad passion mad…

Youth, treasure only gods may keep,
Wilted in me forever now!
I cannot, when I wish to, weep,
And often cry I know not how…

Another fancied my lips were
A casket wrought to hold her love;
And wildly with the teeth of her
To gnaw my very heart she strove.

She willed all passionate excess;
She was a flame of love for me;
She made each ardorous caress
Synthesis of eternity.

She deemed our flesh a deathless thing,
And on desire an Eden reared,
Forgetting that the flowers of Spring
And of the flesh so soon are seared…

And the others! In many climes,
In so many lands, ever were
Merely the pretext for my rhymes,
Or heart-born fantasies of her.

I sought for the princess in vain,
She that awaited sorrowing.
But life is hard. Bitter with pain.
There is no princess now to sing!

And yet despite the season drear,
My thirst of love no slaking knows;
Gray-haired am I, yet still draw near
The roses of the garden-close….

Ah, but the golden Dawn is mine!

This is just a sampling of some of the poetry I heard that day as I was having my hair cut, but I knew that I had come into a cultural experience I had not bargained for, an enrichment of mind and heart that I was not expecting, a pleasant surprise that came as gift, as blessing.

So I left Nelson’s Barber Shop with a little more pep in my step, having gone in for a haircut, but coming out with a mind and heart-affirming experience.