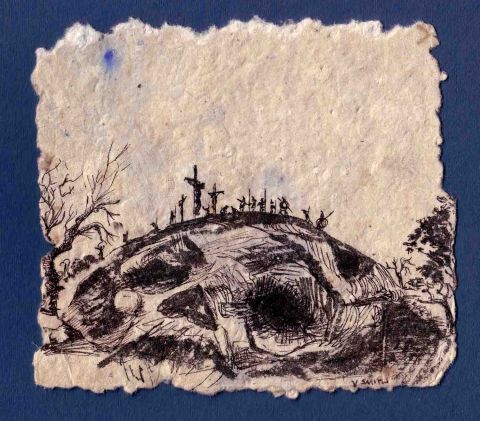 This is a little drawing (about six inches square) given to me by Verna Smith, an artist who works in hand-made paper. She must have made it around 1975, but gave it to me thirty years later. Photos don’t quite capture the delicacy and suggestiveness of the paper: we’re so used to thinking of paper as a neutral ground that we find it hard to pay attention to it when, as in this case, it is the most unique element of the piece. This stuff is beautiful precisely because it’s not a smooth-finished factory-issued white substrate. It’s discolored, lumpy, and spotted, with roughly deckled edges. There’s not another piece of paper quite like it in the world. I’d look at it even if it didn’t have a drawing on it.

But it does have a drawing on it, laid down in good solid black pen-strokes. This drawing’s immediate “aha” moment comes from its combination of two traditional images: the crucifixion of Christ, and a skull.

The two images belong together. All four gospels report (Matt 27:33, Mark 15:22, Luke 23:33, John 19:17) that Jesus died at a place called Skull: in Aramaic Golgotha; in Greek, kranion; in Latin, Calvaria. When you say Calvary, you’re saying Golgotha in Latin: Skull.

Nobody knows for sure why the place where Jesus was crucified was called Skull, but there are many plausible theories. It might have been a place set aside for such executions, perhaps even littered with the bones of previous victims. It might have been a graveyard area. It might have been a rounded hilltop that looked cranial. Or, according to the explanation that I think has the least plausibility but is most suggestive, it may have been the traditional location of Adam’s burial –at least the burial of his skull, which, as legend had it, Seth had handed down through Noah and Shem to King Melchisedech of Salem, who gave it a proper burial in his town which later became Jerusalem.

Artists have found the suggestion irresistible, and frequently depict the cross with a skull at its base. The imagery preaches itself: The second Adam fulfilling all righteousness, dying on the tree above the skull of the first Adam. In some paintings, the blood of the cross even runs down into the skull-cavern below and signifies the redemptive effect of Christ’s death for the father of mankind. As in Adam all die, even so in Christ shall all be made alive.

In Verna Smith’s little drawing, the Skull has become the landscape, on which the tiny figures of Roman soldiers and condemned men stand. If you think of the skull as Adam’s, then portraying it as monumental landscape gets the message across even more clearly: this is us, all of us in Adam our father. And up there on the cross, that too is us, all of us in the thing the Son of God is doing for our salvation in human nature.

In western art, the main thing a skull means is memento mori: a reminder of death. If that is the primary meaning of this monumental skull beneath the cross, then do as it says and remember death. But on Good Friday, remember the death of Christ which he borrowed from us in order to lend us his own life.