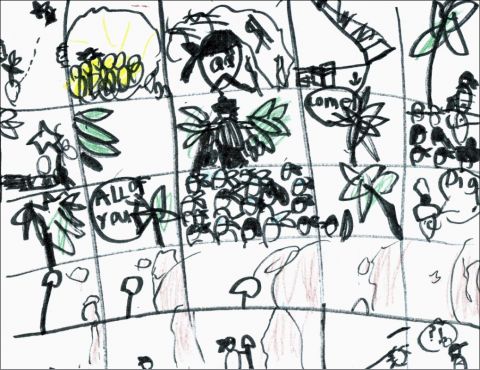 Prolific artist Freddy Age Seven has recently turned from single images to the demanding art form of juxtaposed sequential graphic narrative: cartoons. Here is an untitled composition in 25 panels that tells a pirate story. But it is no mere entertainment: it is both a searching study of human greed, and an exploration of the limits of narrative form. Yes! Look closely. I have taken it apart panel by panel.
$ $ $ $ $ $ $ $ $ $ $ $ $ $ $ $ $ $ $ $ $ $ $ $ $ 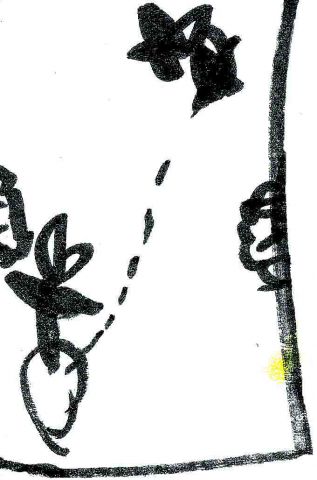 The first panel is intentionally disorienting. It is not a conventional depiction of an imagined space, such as we will be seeing in the next 24 panels. Instead, it is a picture of a map: a flat depiction of a flat depiction. This opening panel reminds the reader that he is not looking through little windows into another world, but is looking at flat two-dimensional markings. Thus Freddy Age Seven signals the tension which is the theme of so much modern art: the tension between depicted space and the flatness of the picture plane. The artist has chosen to use a fat marking instrument (a washable Crayola marker) to draw very small images, which means all of his figures will sit on the page as blockish masses of pigment. Even here, the palm tree that sticks up from the lower island is more doodle than description.
$ $ $ $ $ $ $ $ $ $ $ $ $ $ $ $ $ $ $ $ $ $ $ $ $ 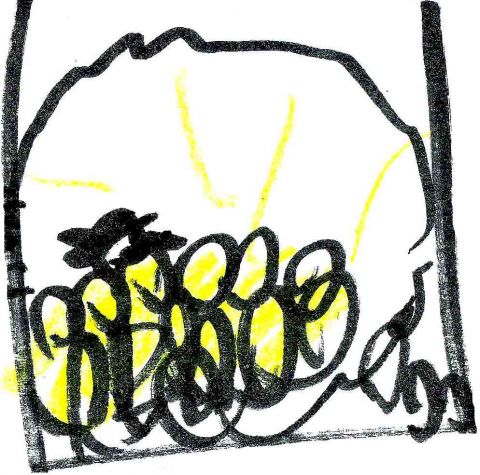 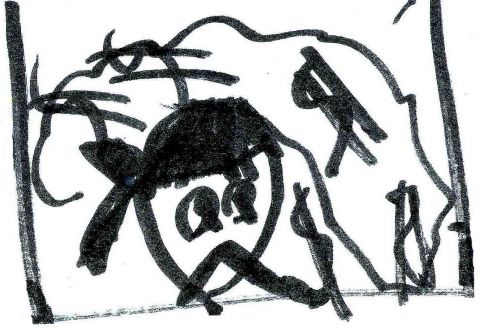 At last the pirate in a direct representation. But it is worth noting how minimalistic the pirate is: a circle for a head, with the top colored in and a couple of little tails to show a bandana. And his mustache is a masterpiece, suggesting an entire facial structure in two bold strokes. This face has no nose and no mouth, but the mustache forces the viewer to project them mentally onto the space above and below that remarkable mustache. 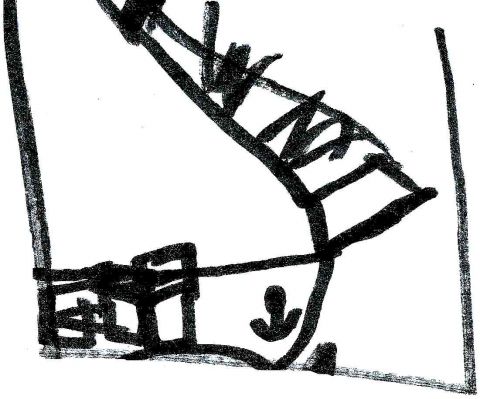 We have seen a treasure map, a dream of avarice, and the greedy pirate. Now we see the only depiction of a sea voyage, and it takes the form of a tightly-cropped image of a ship’s prow and sail. The composition suggests, but only suggests, forward motion. The anchor is clear, the rigging is suggested, and there may be water splashing at the bottom of the panel. Drawing is always a combination of what you choose to show with what you refuse to show. This artist is a master of restraint.
$ $ $ $ $ $ $ $ $ $ $ $ $ $ $ $ $ $ $ $ $ $ $ $ $ 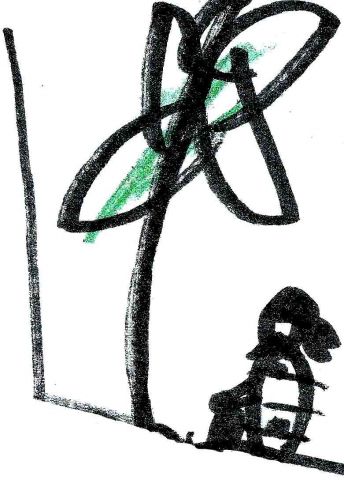 Pirate and palm tree, with the swiftly tilting lower panel border suggesting the steep slope of a beach. Here the pirate has been given the standard-issue Pirate’s Striped Shirt. This panel is among the most visually pleasing in the entire work, partly because the artist, having made such great demands on his viewer for the entire first register of panels, now presents a scene that satisfies our conventional expectations. The subject is in a comfortable middle distance, is visible from the waist up, and moves around within some scenery. An accomplished artist knows that of all his raw materials, the most important is his audience. He will not demand of them more than they can bear, and after four panels of rapid shifts and strict cropping, he lets us have a conventionally satisfying composition. This would make a good t-shirt. 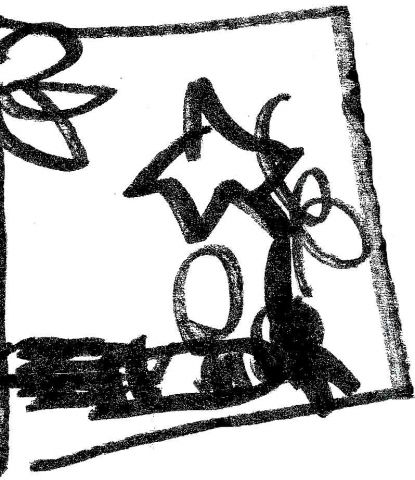 Register two, panel one: Action at last. The curlicue mark and outsized star, universal comic book language for somebody having received a painful head blow. The pirate is now horizontal, and a big globe rests on his prone body. The palm branches hang at the upper left edge of the panel… what we have here is coconut trauma, a common pirate malady, especially among cartoon pirates.
$ $ $ $ $ $ $ $ $ $ $ $ $ $ $ $ $ $ $ $ $ $ $ $ $ 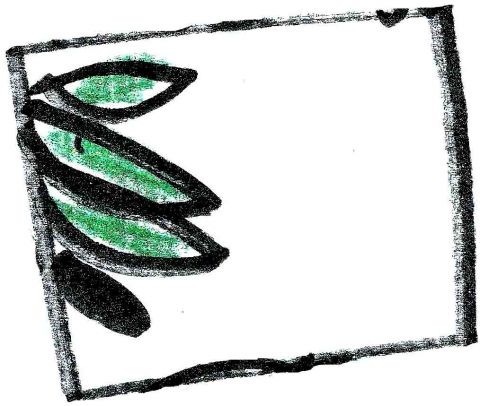 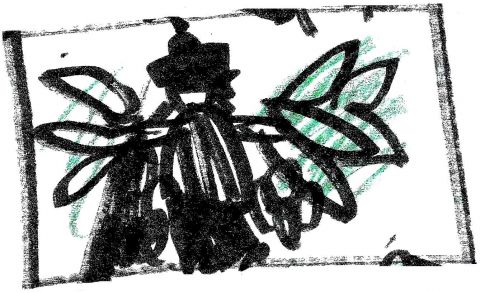 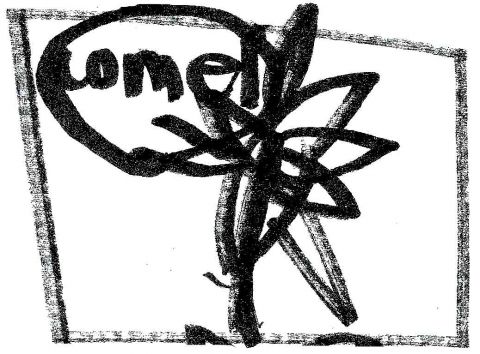 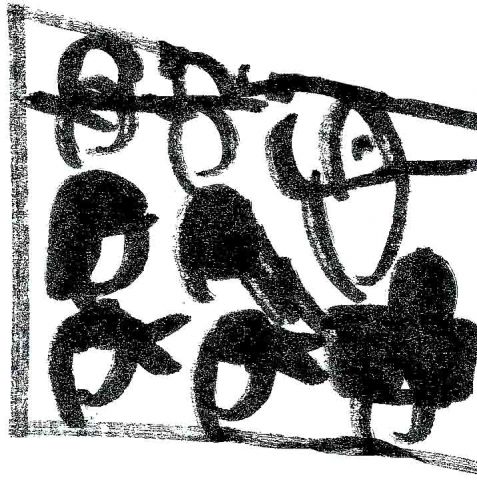 To eight accomplices, who emerge at a moment’s notice. With only a few marks, the pirates are distinguished from each other. Notice that the narrative pace has picked up, and the artist is moving the story along in rapid bursts rather than in the slow and exploratory way characteristic of the first register. Suspense is now doing a lot of the work that pure composition had to do before.
$ $ $ $ $ $ $ $ $ $ $ $ $ $ $ $ $ $ $ $ $ $ $ $ $ 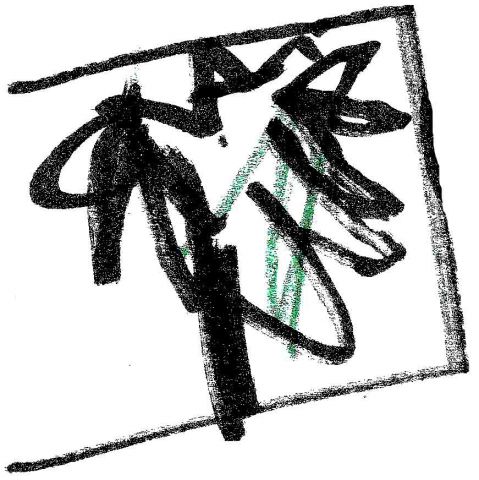 The camera turns its roving eye back to the tree top, which we now know to contain a scheming pirate. But why? There are narrative explanations, of course, which will become evident soon enough. But compositionally, it is worth noting the similarities between this stark hieratic form and the panels painted by the renowned abstract expressionist and action painter Franz Kline.
$ $ $ $ $ $ $ $ $ $ $ $ $ $ $ $ $ $ $ $ $ $ $ $ $ 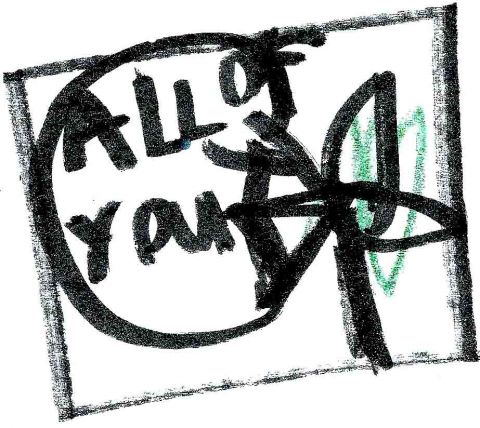 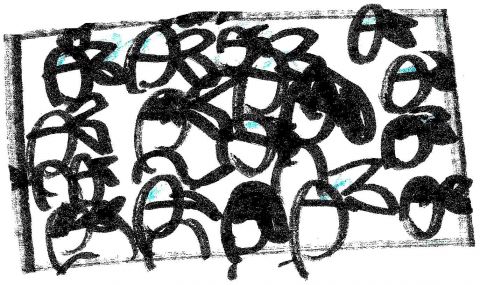 A number of pirates respond, a number which is uncountable because of the way the pirate’s heads mingle together and turn into marks and circles that overlap. But the basic visual point is clear: where before we had seen a few pirates, we now see a great multitude. That’s funny. 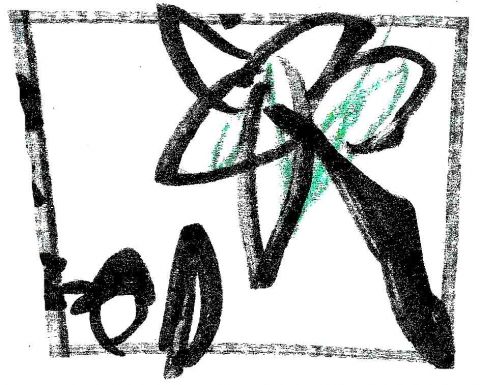 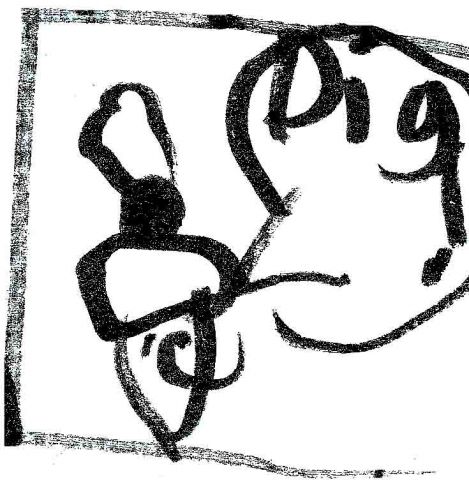 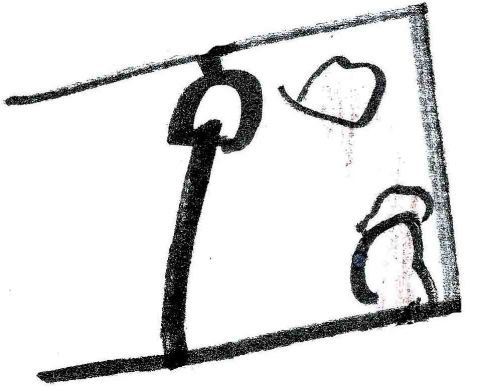 A raised shovel and a scoop of dirt in mid-air, flying toward a pile obviously composed of discrete shovels-ful of similarly-toned dirt. This is a crucial panel which provides the initial statement of a theme which will be developed in the next four panels that compose this register. We will not see the agent for some time, but we will see the tool, the work, and the progress. Here, at the apex of its swing, the shovel is raised higher than the pile of dirt.
$ $ $ $ $ $ $ $ $ $ $ $ $ $ $ $ $ $ $ $ $ $ $ $ $ 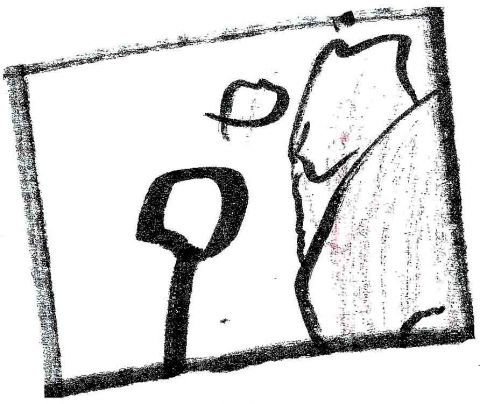 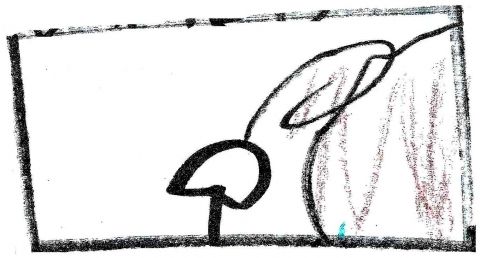 In a more squat panel, for the third statement of the progressive shovel-tossing-dirt theme, the artist allows himself a stylization of the dirt. It is a curly line which shares the spot color of the dirt pile. It is characteristic of this artist that he has no sooner established a visual motif than he begins to simplify and stylize it, pushing it to its bare essentials. If you saw this panel out of context, you might not be able to identify it as somebody digging a hole.
$ $ $ $ $ $ $ $ $ $ $ $ $ $ $ $ $ $ $ $ $ $ $ $ $ 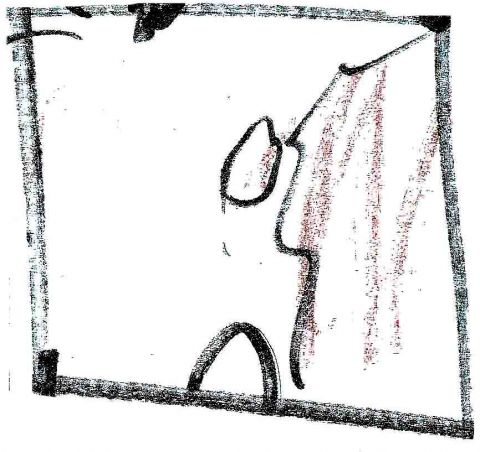 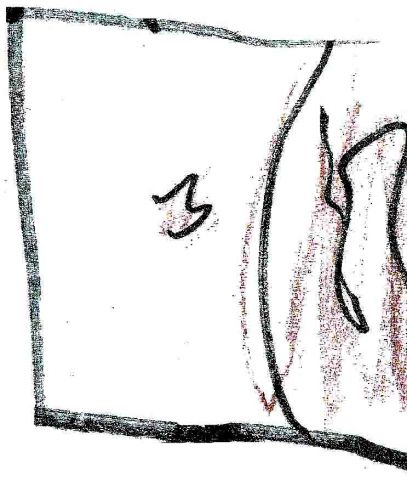 And with this panel, the shovel is no longer visible. It has vanished down the hole with the digger. The flying dirt is not even a closed geometric form anymore, but an open-ended glyph irresistibly suggesting the numeral 3. The sudden appearance of a numeral is rather jarring, forcing the viewer back into confrontation with the picture plane, and into the admission that the strange, undulating line on the right side of the panel no longer has much power to claim that it represents dirt. With the self-burial of the shovel-blade, this sequence of panels has reached the edge of what can be portrayed. Accordingly, the fundamental elements of representation break down and resolve themselves into line and color. There is no digger, then no shovel, and now no dirt. Just marks. The pirate has taken the viewer with him down into the abyss.
$ $ $ $ $ $ $ $ $ $ $ $ $ $ $ $ $ $ $ $ $ $ $ $ $ 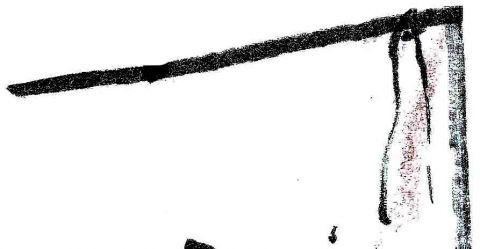 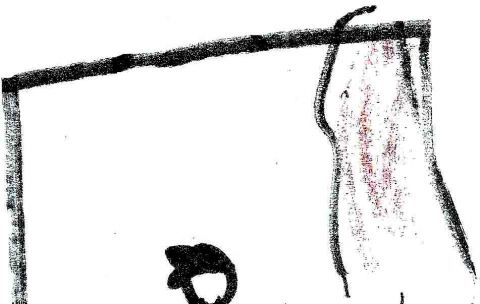 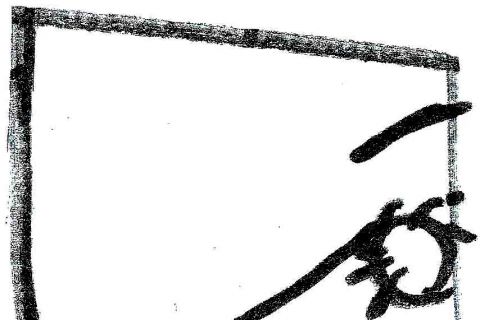 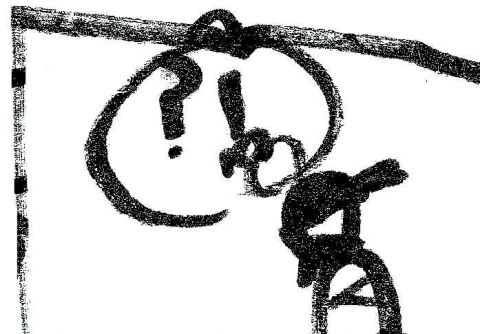 He does not know what this is.

The untitled pirate epic ends with a “?” and a “!”, but really there are more questions here than answers. What has the pirate seen at the bottom of the hole? Some things are better left unsaid, and some things are unsayable.