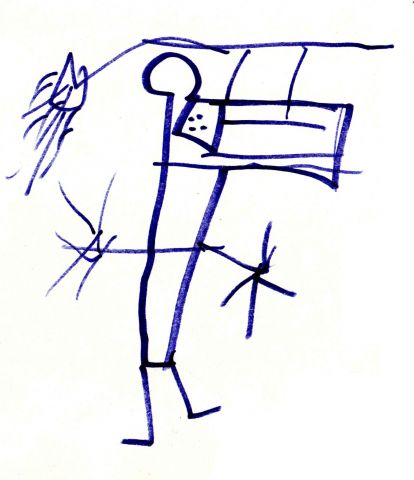 You might want to study this one for a minute before I offer my interpretation of the drawing by a six year old.
.
Done?
.
Okay. It’s an American flag wearing a mortarboard, dancing and waving its hands. Its fingers are like bombs bursting in air, and its tassel is having a party of its own. The flagpole has been fattened to serve as a body, of which the flag is head. The blue starry field is like a face. Four dots represent the fifty stars, and the stripes are represented by three or four stripes at the most. And those are clearly dancing feet. You don’t get much more festive than a dancing flag with a graduation hat. If that’s not a party, you may never have seen a party.

The mortarboard graduation hat is even more boldly abstracted than the flag, if possible. Three lines. A pi symbol with a tassel. That is all.

Happy graduation to anybody who’s entering the pomp and circumstance zone this month.