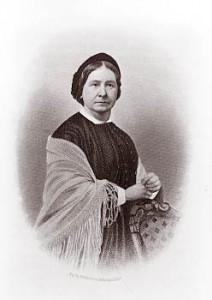 Palmer was an American Methodist lay theologian whose writings and speaking gave shape to the American Holiness tradition, with further influence in the Higher Life movement and Pentecostalism. Beginning in 1836, Palmer and her sister Sarah (both married, but sharing a household) held a series of Tuesday Meetings for the Promotion of Holiness in their New York home, which began as prayer meetings for Methodist women, but grew to include bishops and pastors as well.

On July 26, 1837, Palmer had an experience of sanctifying grace which led her to commit herself entirely to the Lord’s service in an “Altar Covenant.” This event became the pattern of her later teaching. She and her husband had studied John Wesley’s theology of Christian Perfection attentively, and had been struggling over how to attain it. Palmer’s breakthrough, the “Altar Theology,” combined in one easily-recognized package a set of influences which had not previously been held together. She linked together entire sanctification, the baptism with the Holy Spirit, the blessing of Pentecost, the enduement with power for service, and entire consecration. Palmer instructed believers to search the Scriptures, become convinced of what God promised in regard to holiness and power, and then claim those promises by faith in the words. No other evidence was necessary beyond the written promises, and the attainment of holiness would be instantaneous rather than gradual.

Though the power of holiness was all God’s, Palmer’s “Altar Theology” emphasized the need for believers to offer themselves to God without any reservations, taking God at his word to sanctify them completely. That moment of entire consecration was what Palmer called “the shorter way of getting into this way of holiness.” Palmer’s influence was propagated through her 1843 book The Way of Holiness, a magazine called The Guide to Holiness, and the extensive international ministry travels she and her husband undertook. Palmer’s writing style was both conversational and passionate, and though well received in her time, has not remained popular. Palmer opposed women preaching on their own authority, on biblical grounds, but argued for the maximum permissible employment of women in ministry in her book Tongues of Fire on the Daughters of the Lord. Phoebe Palmer’s books all make it clear that she desired her teaching to be judged by whether it is Scriptural, practical, and in line with the broad, main lines of the Christian tradition:

I will let every high state of grace in name alone, and seek only to be fully conformed to the will of God as recorded in his written word. My chief endeavours shall be centred in the aim to be an humble Bible Christian.

Palmer may be the most influential female theological writer in American history. Thomas Oden has made such elaborate claims for her, and more recently Elaine Heath has argued that Palmer should be considered a spiritual writer in the mystical tradition. Palmer’s style is pretty hard to read, it seems to me, so it is unlikely that her own works will ever approach their earlier popularity. But her message of consecration to God on the altar of faith is one that should never go unheard.