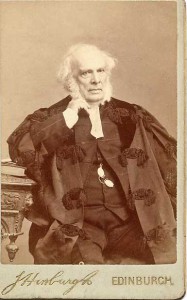 Today (December 19) is the birthday of Horatius Bonar (1808-1889), Scottish preacher and writer of uncommon power and insight. He is best remembered today for the hymn ‘I Heard the Voice of Jesus Say.”

In 1847, Bonar published a book called Prophetical Landmarks. It is a great example of the kind of premillennial theology that maintains its connections with the great tradition of Christian thought and spirituality. One of Bonar’s chapters listed fourteen signs of the decline of his own times (remember: 1847) toward a coming crisis. Bonar was a sober, shrewd, and thoughtful observer of the times; he was no date-setter for the return of Christ. He would probably be surprised to find the weary old world still muddling along 162 years after his book came out. But he would not be surprised that his fourth sign of the times, “the prevalence of superficiality and formalism in religion,” could still sound alarmingly contemporary.

Here it is, without comment or update. I did break his long paragraphs down into bullet points, for easier skimming.

Sign 4: The prevalence of superficiality and formalism in religion. Form without power, a body without a soul, religion without vitality, –these are among the signs of the last days.

The show of piety is wide spread, but the thing itself occupies a narrow circle. There is much profession, but profession lies on the surface, and underneath all may be worldliness. Depth and solidity are awanting; the aspect of religion is unhealthy; the fresh hue of primitive times is departed; the intense vitality, which of right belongs to it, is dried up, so that, instead of its being the living source of motion to the world without, controlling, or counteracting, or impelling its currents, it lies inert and passive, at the mercy of every outward movement. It is a worldly self pleasing religion, adopted for fashions’ sake, and used according to convenience. We look in vain for the profound sense of sin, the simple faith which the Church once manifested, the solemn unearthly walk which she once pursued. We are mere imitators of godliness; we “steal our words one from another.” Hence we are driven about with every wind of doctrine, having no stability, no anchorage, save that which the inertness of death affords.

Satan has now transformed himself into an angel of light, and under this fair disguise he is working with marvellous success.

He leads some astray into fatal error under the pretext of candour and love of truth; others he saturates with the orthodoxy of the head, that they may become indifferent to the state of their heart before God.

Some he persuades to deny the Bible; to others he lauds it, that he may make it a substitute for the God of the Bible.

He cries up faith, that he may set it as a substitute for the object of faith.

With some he denies the possibility of assurance, that he may keep them from peace with God; with others he maintains the necessity of it, only in order that he may lead them to make a god of it, and substitute their being sure of salvation for believing in the Saviour.

He cries down the Arminianism of making works our Saviour, that he may lead us into the more subtle delusion of making a Saviour of our faith.

He allows us a wide range of religious feeling and sentiment, if he can only succeed in making them a substitute for God.

He hinders not our being serious, earnest, solemn, if he can thereby feed the cravings of a restless, empty soul with something which may prevent us from seeking the bread of life.

He permits us to denounce the world’s vanity and hollow pleasures — to be weary of its unsatisfying round of folly, that he may delude us into the idea that this dissatisfaction with the world is a proof that we are religious and thereby cause us to sit down contented when yet a great way off from our Father’s house.

He tolerates the circulation of useful, nay, of religious knowledge, that we may rest satisfied with something short of the fulness of God himself.

He may countenance, too, the routine of religious societies or Church courts, and the false excitement of crowded assemblies eloquent speeches, glowing reports, that he may administer thereby that opiate to the soul by which it may be kept in a delusive day-dream, which seems so like the “sober certainty of waking bliss,” that we cannot think of breaking the luxury of the pleasant spell.

He inculcates the necessity of providing for our children what is called a liberal education, that he may make that a substitute for a father’s blessing and a mother’s prayers.

He urges the obligation of Christian liberality, the necessity of large funds, that he may bring men to rest religious enterprise upon funds, not upon faith, — upon prudence, not on prayer.

These outward things may be in themselves right and good, but what are they without the indwelling Spirit? What is truth without the True One? What is the perfection of Church order without the vital power from above? –The body is there, but the living spirit has fled; the altar and the sacrifice are there, but the fire from heaven descends not; the temple is perfect and the worshippers are thronging its courts, but the glory is departed, Jehovah has left his shrine!

And are not these signs of the last days?