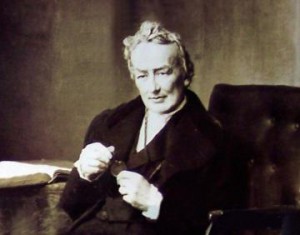 Wilberforce is justly famous as a man of action, and his legislative victories in the cause of justice are the thing we should never forget about him. If he had just done the things he did in the British Parliament, that would be enough. But he was also a good enough communicator that he managed to capture his life-message in words as well as deed. His excellent book has this (not) catchy title: A Practical View of the Prevailing Religious System of Professed Christians, in the Higher and Middle Classes in This Country, Contrasted with Real Christianity. Published in 1797, it is a classic statement of evangelical Christianity. Wilberforce’s Practical View is especially eloquent about how real Christian faith moves the heart and motivates social action.

But his opening gambit in the book is to lambast the lukewarm Christians of his day for not knowing their doctrine, and in particular for neglecting to cultivate proper theologies of Christ and the Holy Spirit. If the nominal Christians of Britain are ignoring gross institutional wickedness like race-based chattel slavery, it is because their hearts are cold; and their hearts are cold because their heads are empty. What Dr. Wilberforce prescribes is a big dose of “the peculiar doctrines of Christianity:” not morality or piety in general, but the core doctrines which we only know from special divine revelation in Scripture.

As early as the third chapter of the book, Wilberforce confronts “The Chief Defects of the Religious System of the Bulk of Professed Christians, in What Regards Our Lord Jesus Christ, and the Holy Spirit.” This was Wilberforce’s secret: It was by turning his attention to Christ and the Spirit that he got so in touch with the heart of God the Father that he was moved to establish justice in his time by abolishing the slave trade. This is how the Trinity freed the slaves.

Wilberforce’s first major move in the book is to get a gigantic slab of Christianity’s “peculiar doctrines” in front of his readers. Under the heading “scripture doctrines,” he launches into a breathtaking survey of the big ideas of the Christian faith. It’s more than enough to keep a semester-long class on doctrine busy:

That ‘God so loved the world, as of his tender mercy to give his only Son Jesus Christ for our redemption;’ That our blessed Lord willingly left the glory of the Father; and was made man: That ‘he was despised and rejected of men; a man of sorrows, and acquainted with grief:’ That ‘he was wounded for our transgressions;’ that ‘he was bruised for our iniquities;’ That ‘the Lord laid on him the iniquity of us all:’ That at length ‘he humbled himself even to the death of the Cross, for us miserable sinners; to the end that all who with hearty repentance and true faith, should come to him, might not perish, but have everlasting life:’ That he ‘is now at the right hand of God, making intercession’ for his people: That, ‘being reconciled to God by the death of his Son, we may come boldly unto the throne of grace, to obtaiin mercy and find grace to help in time of need:’ That our heavenly Father ‘will surely give his Holy Spirit to them that ask him:’ That ‘the Spirit of God must dwell in us;’ and that ‘if any man hath not the Spirit of Christ, he is none of his:’ That by this divine influence ‘we are to be renewed in knowledge after the image of him who created us;’ and ‘to be filled with the fruits of righteousness, to the praise of the glory of his grace;’ that, ‘being thus made meet for the inheritance of the saints in the light,’ we shall sleep in the Lord; and that when the last trumpet shall sound, this corruption shall put on incorruption; –and that, being at length perfected after his likeness, we shall be admitted into the heavenly kingdom.

These are the leading Doctrines concerning our Saviour; and the Holy Spirit, which are taught in the Holy Scriptures, and held by the Church of England. .

Wilberforce says that all of this is common Christian confession, and that even if the Anglican pulpiteers of his day were shy about the particulars, nevertheless the whole wonderful thing was faithfully preserved in “our excellent liturgy.”

“But here, it is to be feared, will be found the grand defect of the religion of the bulk of professed Christians,” says Wilberforce: in their neglecting to think about and therefore to feel the forcefulness of these very doctrines. Just try talking to the average professing Christian about anything in the list. “They appear lost in generalities; there is nothing precise and determinate, nothign which implies a mind used to the contemplation of its object. In vain you strive to bring them to speak on that topic, which one might expect to be ever uppermost in the hearts of redeemed sinners. They elude all your endeavours…”

No wonder, he says, “the bulk of nominal Christians” show so little joy or trust in their savior: they have no love for him. “The love of Christ is languid in them,” so “joy and trust in him cannot be expected to be very vigorous.” And if love for Christ has gone cold, “the doctrine of the sanctifying operations of the Holy Spirit, appears to have met with still worse treatment.”

Wilberforce knows that he will be taken for a fanatic if he seeks to stir up his readers to the radically trinitarian piety he recommends. He knows that exhorting his contemporaries to greater love of Christ and more reliance on the Holy Spirit will move him to the very margin of acceptable behavior. People will say that “this love of our Saviour, which has been so warmly recommended, is not better than a vain fervor, which dwells only in the disordered mind of the enthusiast.” The frozen chosen of his time will warn him to settle down. Still water runs deep, pipe down and let us sleep, they’ll say. He can already hear their reasoning: “Religion is of a more steady nature; of a more sober and manly quality; and that she rejects with scorn, the support of a mere feeling, so volatile and indeterminate, so trivial and useless; as that with which we would associate her…”

So passionate love of Jesus is out. And the Holy Spirit? Don’t get them started:

As to the operations of the Holy Spirit,” it may probably be further urged, that “it is perhaps scarcely worth while to spend much time in inquiring into the theory, when, in practice at least, it is manifest, that there is no sure criterion whereby anyone can ascertain the reality of them, even in his own case, much less in that of another.

Why, in spite of these warnings, does Wilberforce commend “heart religion” so forcefully? His reason is characteristic of the man: Because there is work to do. He has a very realistic and practical notion of the place of emotional excitement in the life of action:

“Frail and ‘infirm of purpose,’ we have a business to execute of supreme and indispensable necessity. Solicitations to neglect it every where abound; the difficulties and dangers are numerous and urgent; and the night of death cometh, how soon we know not, ‘when no man can work.’ All this is granted. It seems to be a state of things wherein one should look out with solicitude for some powerful stimulants. Mere knowledge is confessedly too weak. The affections alone remain to supply the deficiency. They precisely meet the occasion, and suit the purposes intended. Yet, when we propose to fit ourselves for our great undertaking, by calling them in to our help, we are to be told that we are acting contrary to reason. Is this reasonable, to strip us first of our armour of proof, and hten to send us to the sharpest of encounters? To summon us to the severest labours, but first to rob us of the precious cordials which should brace our sinews and recruit our strength?

This whole section of A Practical View teaches lessons I learned from Jonathan Edwards’ The Religious Affections, and for all I know Wilberforce learned them there too (or, more likely, from John Wesley’s works). But while he is valuable as an especially striking instance of one of historic evangelicalism’s great virtues, heart religion, the distinctly Wilberforcian element is the orientation to action.

Wilberforce teaches that we should contemplate “the peculiar doctrines of Christianity” like the Trinity in order to move our affections properly to arm ourselves for the hard work of faithfulness in a world of entrenched injustice. Fill your head to move your heart to steady your hand. Wilberforce is the great inheritor of the virtue Edmund Spenser called “Holinesse,” by which he meant the kind of “holy endeavour” on the behalf of the helpless which is best glimpsed in the image of St. George slaying the dragon to liberate his hostages.

For Wilberforce, it all terminates in action. But you don’t start into action with an empty head and a cold heart. And he puts his finger on the main problem, which is theological, focused on the gospel and the Trinity: “But the grand radical defect in the practical system of these nominal Christians, is their forgetfulness of all the peculiar doctrines of the Religion which they profess –the corruption of human nature –the atonement of the Saviour –and the sanctifying influence of the Holy Spirit.”

If the movie gives you enough Wilberforce to pique your interest, check out John Piper’s new book about him. Better yet, go straight to the classic primary text: A Practical View of Christianity.