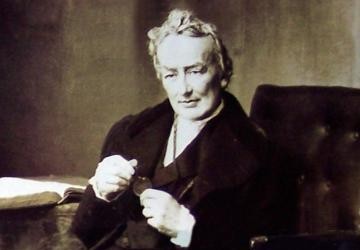 William Wilberforce (1759-1833) admits in his Practical View that his definition of religion runs pretty close to what most people would call a definition of fanaticism (or, in 18th-century terminology, enthusiasm). He calls religion

the implantation of a vigorous and active principle; it is seated in the heart, where its authority is recognized as supreme, whence by degrees it expels whatever is opposed to it, and where it gradually brings all the affections and desires under its complete control and regulation.

That makes it sound like a dangerous force from which one ought to keep some critical distance. Christianity like this, in the estimate of all the worldly wisemen, is to be handled with care: “It’s a good thing in moderation, but don’t get too involved in it.” Wilberforce begs to differ. In the first place, a “vigorous and active principle” implanted in the heart is not something you ask for a little bit of, and what would “moderation” even mean when we’re talking about loving God? But in the second place, a little bit of Christianity is a recipe for a permanently grumpy semi-Christian, who can’t enjoy heaven or earth. It’s not the totally sold-out saints who mope through life disappointed with everything, but the ones who are hedging their bets and keeping a few options open. Wilberforce says:

“Drink deep…or taste not,” is a direction full as applicable to Religion, if we would find it a source of pleasure, as it is to knowledge. A little Religion is, it must be confessed, apt to make men gloomy, as a little knowledge to render them vain: hence the unjust imputation often brought upon Religion by those whose degree of Religion is just sufficeint, by condemning their course of conduct, to render them uneasy; enough merely to impair the sweetness of the pleasures of sin, and not enough to compensate for the relinquishment of them by its own peculiar comforts. Thus these men bring up, as it were, an ill report of the land of promise, which, in truth, abounds with whatever, in our journey through life, can best refresh and strengthen us.

Bad spies! No promised land for you! Caleb never bored us with cliches about moderation…