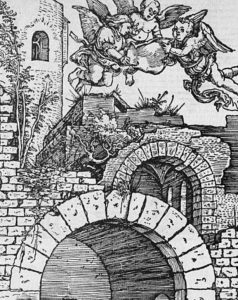 For at least three reasons, it seems like there’s nothing less appropriate than for God to become incarnate:

Divinity is infinite; but humanity is finite, and those two things don’t go together by nature.

God is simple, not put together from constituent parts; but for human nature, some assembly is required and batteries are not included.

Divinity is perfect to such an extent that if it were to “become” anything, it would either have to become better (can’t) or worse (won’t).

These stark contrasts are why Christians have always spent a good part of the Christmas season cultivating astonishment. In one Charles Wesley hymn, he teaches us to sing of “Our God contracted to a span, / Incomprehensibly made man,” and praises God that “He deigns in flesh to appear, / Widest extremes to join.” The amazing grace of Christmas is surely that God has done the most unlikely, the most improbable, the most inappropriate thing imaginable.

And yet, “inappropriate” cant’ be right, can it? To go forward along that line of thought, you’d have to say that for God to become incarnate was for God to do something unfitting, unsuitable, something that shouldn’t have been done. Even if it wasn’t morally wrong, or illegal, then at least we’d be saying that it was aesthetically wrong. We’d end up having to call the incarnation tacky, or accuse it of clashing like plaid with polka dots.

It’s hard to know what to say to avoid being wrong here.

I think the solution is to stop looking at the two entities, divinity and humanity, as if they were two things that can be compared. The sense of a mismatch between the divine and the human is real, but we have to avoid considering the two as if they were somehow two entities that stood over against each other with equal weight. We want to avoid the mistake of thinking we have a conceptual tabletop on which we can place these two items in order to see how they look, side by side. If we compare them that way, we will register their failure to coordinate. We’ll make a list of the properties of each one, and sure enough, they won’t belong together.

But isn’t it peculiar to begin a thought project by setting up these two things as if they belong on the same tabletop? It’s peculiar because they can’t in fact both be handled in a parallel way like this. One of them is absolutely prior to and superior to the other; and the latter is entirely dependent on the former.

This being the case, the right approach is to begin altogether with God. Is it appropriate for God to become incarnate? Yes, for several reasons.

First, because it’s appropriate for God to make himself known to creatures through creaturely means. “The invisible things of God” are always being made known through visible, created things. The incarnation, rather than contradicting that principle, is the ultimate instantiation of it.

Second, because God’s very nature is goodness, a goodness which communicates itself to others. So from God’s side of things, it is perfectly appropriate, and eminently fitting, to make himself known and present to human creatures.

There are other reasons, drawn from God himself, that the incarnation is rightly understood as appropriate. Considering these in the right way, we can glimpse why it is not unbecoming for God to become human.

But there, in the pun on “unbecoming” and “becoming,” we need to surface one more faulty presupposition for examination. Because the Bible says that God became man, or “the word became flesh,” we sometimes allow ourselves to think that in this event God stopped being what he was, and morphed instead into what he had not previously been. That’s not what the Bible means here, and it’s not what incarnation is. Instead, without ceasing to be fully divine, God the Son added to himself human nature. God did not change; it would be better to say that human nature changed in relation to God by being brought into this new relation to the immutable God. Understanding it this way (as you have to, unless you’re ready to redefine “God” sub-biblically as “one of those changing things”) requires a kind of Copernican revolution of the theological mind: we thought we were describing how God’s nature arced across our sky and revolved around us, but had to admit that God’s nature arcs across our sky precisely because we revolve around him.

It’s enough to make you dizzy if you ponder it too intently, which is precisely what we already knew the message of Christmas was supposed to do. But it’s not unbecoming, or inappropriate, or unfitting for the goodness and mercy of God, as it might appear to be if we thought God and man could be simply compared and contrasted. Understood properly and theocentrically, the incarnation of God is an event than which nothing more appropriate can be conceived.

Footnote: This whole line of thought, and more, is in the first question on the incarnation in Thomas Aquinas’ Summa Theologiae (III, question 1, article 1), “whether it was fitting that God should become incarnate.”