It’s one of the most famous verses in the Bible, the hit single 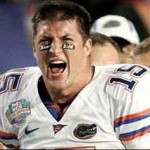 everybody knows even if they don’t listen to the rest of the album. 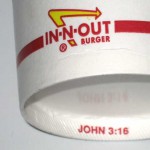 You can wave it on a banner, paint it in your eyeblack, or print it underneath your In-N-Out cup; John 3:16. No matter how often I see it, no matter what kind of knuckle-head has stuck it to their bumper, no matter how out-of-the-blue or isolated it is from its context, it always gets me.

Focus on the Family put it in the mouths of children and bought air time where a mass audience sensitized by Tebow hoopla would see and hear it. “For God so loved the world, that he gave his only Son, that whoever believes in him should not perish but have eternal life.”

This verse has everything.

Start with the little word “so.” It’s actually the first word in the sentence, at least in the original Greek of John 3:16. It’s a great big pointer word. Its primary meaning isn’t “so much,” but “in this way,” or “thus.” The verse doesn’t say “God loves the world so much that he sent his Son,” rather it says “Look at this, this right here is the way God loved the world: he sent his Son.”

God loved like this! As a pointer-word, “so” directs your attention like an index finger toward a thing so unparalleled and singular that all we can do it look and learn. And it points to a past action, an event already accomplished. Think how much we lose when we unconsciously simplify this verse down to “How much God loves the world” (present tense, emphasizing magnitude) rather than what it wants to show us: Right over here is how God did decisively love the world!

If you do follow the pointing word to the recommended object of attention, you see vast expanses of doctrine opening up in front of you. God is in action here: He loves, he gives, he saves the perishing. J. Sidlow Baxter wrote a whole book on this verse, published under the title The Best Word Ever (and released in America as God So Loved). Baxter noted that this Best Word Ever contains at least ten vocabulary words which could practically stock a Christian understanding with everything it needs. Just look at them isolated in Baxter’s list form:

It would be worthwhile to expound on the biblical meaning of each of those words, but I would like to do something else: show how John 3:16 carries an entire systematic theology within itself, implicitly.

Consider the doctrinal loci in a traditional order:

The Doctrine of Revelation: According to John 3:16, God has made this love known to us in a mighty act of salvation which we should pay attention to. In John 3, Jesus has just told Nicodemus that he has heavenly things to declare, because he is the one who has descended from heaven and gives testimony about what he knows for certain and has seen. One of the heavenly things made known in John 3:16 is that God has an only Son, which is big news. And he has made this known especially in Scripture, which brings us to…

The Doctrine of Scripture: Jesus is arguing from Scripture, citing the book of Numbers (“as Moses lifted up the serpent in the wilderness, so must the Son of Man be lifted up”), affirming the unity of Old and New Testaments, and implying with regard to the Old Testament its historical veracity and its openness to typological interpretation. There’s something here to offend everybody, so take your pick. To top it off, have you ever noticed that it’s not clear who is the speaker in John 3:16? Translations all offer their best guess about where the quotation marks should begin and end in this conversation with Nicodemus. Jesus may well be the speaker, but the narrator of the Gospel may also be intruding his voice here (as he does elsewhere). You may object that it doesn’t matter who is speaking, and you may be right. But the only way you’re right is if the voice of God sounds forth equally in the words of Jesus as in the words of his apostolic evangelist, if “what the Scriptures say, God says.”

The Doctrine of God: The message of the verse is about the universal love of God for the cosmos, which only makes sense with a strong doctrine of creation in place (insert an implied doctrine of creation here). This God is an intervener, a wonder-worker, a healer of his chosen people. He is a judge whose wrath threatens destruction, and a savior whose love brings life that has no limit short of eternity. Eternity is his. He is also the kind of God who has a unique Son, meaning he is God the Father –not “father” with relation to a world which is his offspring, but Father with relation to a Son who is unique, only-begotten (whether the word “monogenes” is best rendered that way or not), and so intimate to the Father’s being that he is give-able. Like all the best Christian theology, John 3:16?s doctrine of God leads inexorably to…

The Doctrine of Christ: In systematic theology, it is traditional to divide the doctrine of Christology into two major sections: 1. On the Person of Christ, and 2. On the Work of Christ. John 3:16 includes both. It teaches that Christ is the unique Son of God (that is his person) and that he is given for the life of the world (that is his work).

The Doctrine of Sin: Within 3:16 itself, a very dark shadow is cast by the “giving” of the Son which is parallel to the lifting up of the bronze serpent in the wilderness. What human situation is presupposed by this giving and this lifting up? If this is the solution, what must be the problem? The answer is sin. And the following verses make the nature of sin an explicit subject of description: “This is the judgment: the light has come into the world, and people loved the darkness rather than the light because their works were evil. For everyone who does wicked things hates the light and does not come to the light, lest his works should be exposed.” Sin is a particular kind of culpable ignorance, a suppressing of the truth by those who know better because they know where the light is and what it will show.

The Doctrine of Salvation: In this verse, it’s wall to wall soteriology (the doctrine about salvation). The Father and the Son have worked out the way of salvation, and it is a plan wherein people will be saved by looking up. Just as the serpent in the wilderness was lifted up, Jesus Christ will be lifted up and we will look to him and be rescued. Somewhere in the tension between the universal scope of “the world” and the particular results among “whosoever,” salvation reaches the chosen. It reaches them by faith in the Son, and it has the character of life. Look how God loved!

The Doctrine of The Church: If the previous doctrine was too easy to find because it is so pervasive, this one is hidden or absent. I just can’t find much ecclesiology in John 3:16. If you find some, send it to me. No fair importing the ecclesiology of the whole book of John.

The Doctrine of the Holy Spirit: The only way to find pneumatology in John 3:16 is to dig in your heels and swear that it’s hidden in the word “believe.” Doctrinally speaking, I would in fact insist that saving faith is only possible where the Holy Spirit is at work within the believer. But exegetically, even I am willing to rein in my interpretive acrobatics at this point. It cannot be insignificant, however, that John 3:16 is prefaced by Jesus’ admonition that “what is born of the flesh is flesh, but what is born of the Spirit is spirit,” and that ending the section we have the remarkable statement: “He whom God has sent utters the words of God, for he gives the Spirit without measure. The Father loves the Son and has given all things into his hand.”

The Doctrine of Final Things: Eschatology is here in John 3:16?s stark alternative between perishing and having eternal life. These are final and irreconcilable. Another kind of eschatology is recognized in the past tense of the verbs “loved” and “sent,” which show that God has already acted decisively and finally to bring about salvation. Between those accomplished past tenses of God’s determinative action on the one hand, and on the other hand the future tense of the life which believers will have and which those who perish will not have, we have the present moment when Jesus is telling Nicodemus that he must be born again.