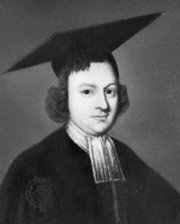 Christoper Smart (1722–71) , known to companions as Kit, was a learned poet who wrote plenty of poems which are mostly unreadable now by anybody outside the guild of English literature studies: Ode to the Earl of Northumberland, To Ethelinda, and Lines After Horace —that sort of thing. He edited a magazine and got into literary feuds of the kind that seemed important in the eighteenth century.

Smart won prizes for a series of theological poems on God’s attributes: “Poetical Essays” on the divine Eternity, Immensity, Omniscience, Power, and Goodness. And his Hymn to the Supreme Being records how he dedicated himself to serving God after recovering from a major illness: “That I might live for THEE and THEE alone,” Smart says, and gives

All glory to th’ ETERNAL, to th’ IMMENSE,
All glory to th’ OMNISCIENT and GOOD,
Whose power’s uncircumscrib’d, whose love’s intense
But yet whose justice ne’er could be withstood.

Still, as much as a theologian might appreciate parts of the “Poetical Essays” on divine attributes, there’s nothing in Kit Smart’s work that is especially notable.

Until he was sent to the madhouse. There, he wrote two poems that have become his most famous works.

What did Smart do that got him confined to a madhouse? Apparently he prayed too much. Samuel Johnson defended him: “My poor friend Smart shewed the disturbance of his mind, by falling upon his knees, and saying his prayers in the street, or in any other unusual place. Now although, rationally speaking, it is greater madness not to pray at all, than to pray as Smart did, I am afraid there are so many who do not pray, that their understanding is not called in question.”

But whatever the cause, Kit Smart ended up in the madhouse for some time, and it was while he was there that he wrote his two most famous poems. One is the Song to David, an eighty-six stanza song of praise. By focusing on David the Psalmist, Smart praises not only God, but praise itself: the poem is a kind of meta-praise that glorifies God for praise. Stanza 50:

PRAISE above all—for praise prevails;
Heap up the measure, load the scales,
And good to goodness add:
The gen’rous soul her Saviour aids,
But peevish obloquy degrades;
The Lord is great and glad.

And for the next 22 stanzas, the word ADORATION, all caps, moves rhythmically from line to line, strumming across the surface of the stanzas like the finger of a harpist. First it occurs in line one, then in the next stanza it occurs in line two, then line three, and so on, repeatedly. And Smart moves up and down the levels of creation, praising God for plants and stones and animals of every kind.

The plants, animals, and other levels of creation are important to Smart. Somewhere between his physical illness and his mental illness, Kit Smart made a lot of extravagant claims about having received a special grace from God: the ability to hear the sound of adoration all around, in the pure language of real things themselves, rather than in mere empty words. He pressed his poetic skills now toward the end of giving a voice to the voiceless praise of all things. In the David poem he reports how God revealed his name to Moses:, and how creation answered back silently:

Tell them, I am, JEHOVAH said
To MOSES; while earth heard in dread,
And, smitten to the heart,
At once above, beneath, around,
All Nature, without voice or sound,
Repli’d, “O Lord, THOU ART.”

Kit Smart apparently believed that all human art participated in the task of giving a voice and sound to creation’s otherwise silent praise-response to God’s “I AM.” And he certainly thought that he had a particular vocation to do so in his own work: “by the grace of God I am the Reviver of ADORATION amongst ENGLISH-MEN.” Smart claimed to have insight into the secret primal connections between things and words, and wrote poems like Song to David in order to speak those connections out loud, reviving ADORATION among the ENGLISH-MEN of the eighteenth century.

The Song to David became famous in Smart’s own lifetime, but something else he wrote in the madhouse was not published until the twentieth century. It is the fragmentary notes of a work called Jubilate Agno. It is a baffling piece of work: several pages of lines that begin with the word “Let,” and several other pages of lines that begin with the word “For.” The “Let” lines each pair an animal with the name of a Biblical character, and the “For” lines each offer some sort of explanation, usually pronounced with stunning certainty but giving more questions than answers.

Here are some of the “Lets,” in no particular order:

Let Ithream rejoice with the great Owl, who understandeth that which he professes.
Let Abigail rejoice with Lethophagus — God be gracious to the widows indeed.
Let Shammua rejoice with the Vultur who is strength and fierceness.
Let James rejoice with the Skuttle-Fish, who foils his foe by the effusion of his ink.
Let John rejoice with Nautilus who spreads his sail and plies his oar, and the Lord is his pilot.
Let Philip rejoice with Boca, which is a fish that can speak.

And here are a handful of the “Fors” taken at random:

FOR I pray the Lord JESUS that cured the LUNATICK to be merciful to all my brethren and sisters in these houses.
For the Devil can work coals into shapes to afflict the minds of those that will not pray.
For the coffin and the cradle and the purse are all against a man
For the sin against the HOLY GHOST is INGRATITUDE.
For the Scotchman seeks for truth at the bottom of a well, the Englishman in the Heavn of Heavens.
For the Planet Venus is the WORD PRUDENCE or providence.
For GOD nevertheless is an extravagant BEING and generous unto loss.

How this all goes together, or would have gone together if Smart had finished the piece, is a famous conundrum in literary studies. Many of the Lets and Fors demonstrably belong together like antiphonal lines of a Psalm, but they are written on separate sheets of paper and Smart provided no key for combining them systematically. It’s also not clear which set of lines is establishing the order, because often the Fors develop a logic of their own, as in the series on flowers:

Or in the most famous excerpt from the Jubilate Agno, the section on “my Cat Jeoffry” so dear to cat-lovers:

For I will consider my Cat Jeoffry.
For he is the servant of the Living God duly and daily serving him.
For at the first glance of the glory of God in the East he worships in his way.
For is this done by wreathing his body seven times round with elegant quickness. …
For he counteracts the powers of darkness by his electrical skin and glaring eyes.
For he counteracts the Devil, who is death, by brisking about the life
For in his morning orisons he loves the sun and the sun loves him.
For he is of the tribe of Tiger. …
For he is a mixture of gravity and waggery.
For he knows that God is his Saviour. …
For by stroaking of him I have found out electricity.

If you’ve never read the Song to David or the Jubilate Agno, give yourself a treat by trying. I say “trying” because even the Song to David has passages of hermetic intricacy that are bound to knock you upside the head and exceed your ability to understand. And Jubilate Agno is positively wild: the only way to read it is to surrender to its rhythms and progressions. Consider it a workout, take away what you can, and leave the rest. Smart was trying to restore ADORATION to our language, and to say out loud for his fellowmen what the mute creation is expressing in its own way. He apparently believed he succeeded. I think he did achieve some sporadic victories, for those who have ears to hear his crazy praise.