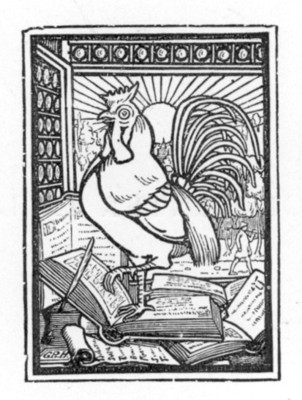 When a nickname really fits somebody, it catches on and comes to mind easily. But when somebody doesn’t have a good nickname, it’s no good forcing things. I was recently leafing through a fun book, Asa Don Dickinson’s 1931 list of classics called The Thousand Best Books (see it here). Dickinson was a world-class bibliofanatic, and he zips through 1,000 classics with a judgment about this one and a witty remark about that one.

He also likes nicknames, and if he can find a nickname for an author, he’ll include it. Some make perfect sense: “The Father of Tragedy” fits Aeschylus well, for instance, and you can make some sense out of “The Achilles of the North” for Beowulf. But then there’s “The Shakespeare of Prose,” who is supposedly Jane Austen; a nickname which makes you wonder if the person who coined it had a worse grasp of Shakespeare or Austen. Or how about the unsettling “The Pope of Philosophy” as a nickname for Aristotle? Or the disappointing “The Father of Italian Novelists” for Giovanni Boccaccio?

In his defense, Dickinson isn’t making up any of these, as far as I can tell. He just collects and reports them. Some of them are so inapt, clunky, or inscrutable that I got laughing fits from reading them aloud. Try your luck with some of my favorites, and see if you can guess who ANY of them describe:

These are so fun to read, so nonsensical and unhelpful, that they take on a certain wild poetry in their own right, more poetic the less comprehended. Following Dickinson’s template, I made up some more nicknames with no known authors to correspond to them:

“The Bard of Poughkeepsie”
“Big Thesaurus”
“The Lantern of the Northern South”
“Yet Another Samuel Butler”
“Jimmy Good-Descriptions”
“The Wide-Mouthed Urn”
“Captain Transgressive”
“California’s Updike”
“Old Pastry-Stuffing”
“Allen Ginsberg on Prozac”
“The Kingsley Amis of the Tropics”
“Steinbeck’s Stein of Beck’s”
“Rembrandt with a Word Processor”
“The Freddy Mercury of Belles Lettres”
“The Chesterton of Tort Reform”
“The Cajun Demosthenes”
“Mr. Somebody-Take-His-Typewriter-Away”
“America’s Sleepy Cervantes”
“The Fourth Bronte”
“The Shakespeare of Limericks”
“The Cyberpunk Tolkien”
“Timmy the Tattler”
“Manhattan’s Samuel Pepys”
“Snuffleupagus”
“Ben Jonson of the Overpasses”
“That Most Cracked of Pots”
“Heinous Amos”
“The Gentle Jerk of Boomtown”
“Umberto’s Echo”

More real nicknames (good, bad, and other) can be found in the old book Nicknames and Sobriquets, available here.