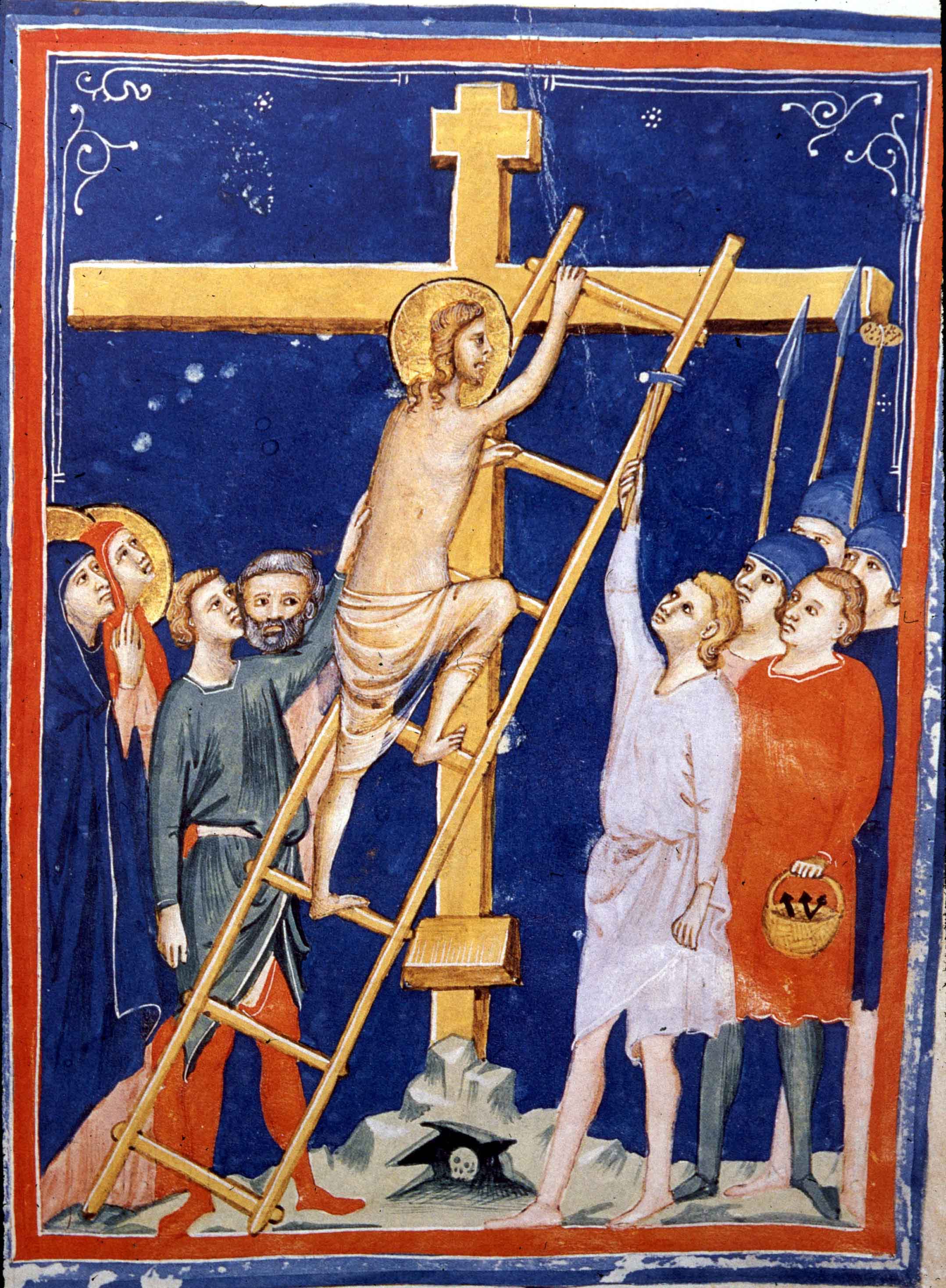 This 14th century painting shows Christ climbing up onto the cross. It is surely historically inaccurate, but it even more surely makes a theological point worth making. It makes the point in a way that I find disarming specifically because of the liberties it takes with history.

Jesus didn’t climb a ladder to get his body onto the wood of the cross. But on Good Friday he was the active one, the agent, in the atonement that took place between God and man. He was not overtaken by the course of a tragic history, but he took history with him into the presence of God. He carried out in the flesh a plan he and his Father in the unity of the Holy Spirit had worked out long before.

The artist who painted this image is Pacino di Bonaguida (bone-uh-GWEED-uh). He was a well-known artist in Florence, Italy, and painted this around 1320 for a book that contained 38 painted pages (called “miniatures” in the language of medieval illuminated manuscripts).

We call the book Scenes from the Life of Christ and the Life of the Blessed Gerard of Villamagna, and it now lives in America, in the collection of the Pierpont Morgan Library in New York.

There are two striking things about this image, and they are closely related.

First, the vigorous activity of Jesus is striking: he is high in the middle of a picture plane created by the height and width of the cross itself. With bold steps and an outstretched arm he climbs up a ladder that cuts the picture plane diagonally in half.

This makes a bold statement about just how voluntary Jesus Christ’s death for sinners was. A Christian who deeply understood this attitude of Jesus was St. Francis of Assisi (1181-1226), and it was Franciscan spirituality that generated an image like this. One art historian points out that “the iconography of the christological cycle has been strongly influenced by Franciscan theology, especially in the inlcusion of scenes emphasizing Christ’s willing sacrifice. Jesus is first shown carrying his own cross and then climbing energetically up the ladder to be nailed to the cross…”

In the fourteenth century, there was a kind of revival of interest in the dramatic elements of the crucifixion: this is the time period that saw the development of stations of the cross, passion plays, and books that gave close attention to the most minute elements of the passion. One of the earliest of those books was Meditations on the Passion by Pseudo-Bede. There the story is told this way:

The clamoring crowd leads Christ to the place of Calvary… Then, when the cross had been prepared, they cry:
“Ascend, Jesus, ascend.”
O how freely He ascends, with what great love for us He bore everything, with what patience, what gentleness!

This picture captures that activity, that divine initiative (Jesus is the Son of God) carried out in perfect human obedience (Jesus is truly and fully human), unforgettably.

Second, framing the assertiveness of Jesus is the nearly total passivity of the crowd. Mary, John, and the friends of Christ are usually shown wailing in despair or cringing in grief. Here, they are bystanders who seem to be wary of interfering in an important task. The Roman soldiers and even the ordinary citizens of Jersualem are usually pictured as tormenting or mocking Christ on his way to the cross. Here they hold back, their lances pointed away from the cross. One of them, like an apprentice, hands up a hammer, while another has a bucket of nails ready. “The calm and peaceful mood … is fundamentally different from the atmosphere of contemporary depictions of the Passion,” remarks Anna Eörsi (see below).

Pacino di Bonaguida is a powerful theologian and preacher whose work was done in visual images. In my attempt to explain what he’s up to in this picture, I haven’t quite written a thousand words yet. But you haven’t learned anything you didn’t understand the second you saw the picture at the top of the post. Here’s a picture worth a thousand words, if not “a thousand tongues to sing my great redeemer’s praise.”

You can find photos of some of the pages from this Pacino di Bonaguida book printed in Laurence B. Kanter, et al, Painting and Illumination in Early Renaissance Florence 1300-1450 (NY: Metropolitan Museum of Art, 1994). You can find a description of this “Mounting the Cross” image in Anna Eörsi, “Haec Scala Significat Ascensium Virtutum: Remarks on the Iconography of Christ Mounting the Cross on a Ladder,” Arte Christiana 85:780 (May/June 1997), 151-166.