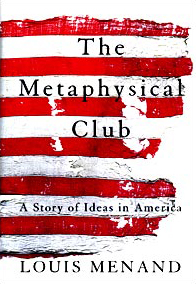 I just finished a very fast read-through (with permission to skip some sections) of Louis Menand’s Pulitzer Prize-winning 2001 book The Metaphysical Club: A Story of Ideas in America. It’s a 500-page book about one school of American philosophy. I picked it up used and have had it on the shelf for a few years, waiting until my teaching duties called for me to brush up on pragmatism. The time came at last –John Dewey must be taught– so down came the big Pulitzer-winning doorstop. Time to take the medicine.
To my surprise, I found the book positively delightful to read. It’s a page-turner. I’m still unsure just how Menand managed to pull it off, but I want to figure it out, so I can copy some of his techniques. The Metaphysical Club is a history book, with an omniscient, academic-voiced narrator, but the narrator seems like a real somebody, somebody you would want to have a conversation with. I think Menand has incorporated some of the cliff-hanger techniques of popular thrillers into his history-of-philosophy writing. His opening sentences are almost all attention-grabbers, and his concluding sentences are almost all suspense-creators.

The best example is in the middle of the book, at p. 289: John Dewey has just accepted the position of being chairman of the philosophy department at the University of Chicago, which Menand narrates crisply without omitting any of the ups and downs of university politics and the kind of things that lead professors to change jobs. “Harper could pay only $4,000 for the first year,” etc., and then suddenly, “Dewey… took a train to Chicago. He arrived at a critical moment in American social history. It was the middle of the Pullman strike.”

Period. Transition to the next section. “George Pullman was an engineering entrepreneur. He had made his reputation when Chicago was young by raising large downtown buildings out of Lake Michigan mud in which they were starting to sink.” Those sentences make Pullman sound like Paul Bunyan, and Menand fills us in on how he pretty much owned a whole town as his private property. Then off we go on a zippy history of the Pullman train strike, folding in the state of industrialization and labor relations, before rejoining Dewey, stranded in his train to Chicago, a few pages later. Dewey is apparently politically radicalized by what he sees and hears during the strike, and Menand will follow that thread of thought later in the book.

But look at Menand’s technique: The train strike surprises the reader. It shows up with no warning in the last sentence of a section, and the book’s narrative takes a turn right there at that sentence. It veers off into the characters involved in the labor unions and socialism, and doesn’t come back until it’s covered a lot of interesting ground and the reader has almost –almost– forgotten where the story had originally been going.

The book nearly has a plot. I almost have to write “spoiler alert” before describing its development, in case you want to read it. Remember, this is a book about a phase in the history of American philosophy. Nobody expects it to be so readable, so motivating.

I want to name that technique. When you turn a corner like that in a book about the history of ideas, I think it should be called a Menand. Okay, maybe not. It’s actually a common technique in writing thrillers –it’s one of the handful of things Dan Brown does well the DaVinci Code– and it was used with great comic effect in the early seasons of the Simpsons, when an episode would start with Homer reading personal ads, turn into a story about getting a trampoline, become an adventure with a self-help guru, and end with the whole town imitating Bart. The surprising bit is that Menand can do this with John Dewey and Oliver Wendell Holmes.

Surely somebody somewhere has anatomized Menand’s technique, so lesser writers can learn from it. My short list of lessons learned includes: He goes out of his way to put significant historical events into the story. To spell out the story of pragmatism, he starts with the raid on Harper’s Ferry, runs through the Pullman strike, and ends with the first world war. He refuses to pass up an interesting character; his diction is crystal-clear; he does that plot-pivot routine with special attention to the transitions; and he concentrates his insights into crisp, provocative, little summaries. Examples of this last include “The Civil War was fought with modern weapons and premodern tactics,” (49) and “William James invented pragmatism as a favor to Charles Peirce” (347).

When it comes to negotiating the really difficult philosophical topics, Menand opens a special bag of tricks. First, he raises the reader’s expectation that he is about to communicate something important and understandable: After introducing his four main thinkers (Holmes, James, Peirce, and Dewey), he says “We are still living, to a great extent, in a country these thinkers helped to make.”

Next he simplifies: Pragmatism is not an idea, but an attitude toward ideas. Then he unfolds that simplification amply enough to provide an advance sketch of the whole project:

What was that attitude? If we strain out the differences, personal and philosophical, they had with one another, we can say that what these four thinkers had in common was not a group of ideas, but a single idea –an idea about ideas. They all believed that ideas are not ‘out there’ waiting to be discovered, but are tools –like forks and knives and microchips– that people devise to cope with the world in which they find themselves. They believed that ideas are produced not by individuals, but by groups of individuals –that ideas are social. They believed that ideas do not develop according to some inner logic of their own, but are entirely dependent, like germs, on their human carriers and the environment. And they believed that since ideas are provisional responses to particular and unreproducible circumstances, their survival depends not on their immutability but on their adaptability.

He sets the hook in a similar way when he takes us deeper into Dewey’s thought: “Dewey proceeded to write “The Reflex Arc Concept in Psychology,” a very short, very technical paper, which he published in 1896 and never reprinted, and which is the key to his thought.” Note the raised expectation, the sense that we are about to be told the real stuff, and the sense that we are in the hands of a confident (not quite cocky, just confident) author who is competent to explain it all to us.

When he has to make a subtle distinction, he links it to something sharply imagined: “The story of… the difference between Benjamin Peirce’s scientific generation and Charles’s … is the story of two demons. The first made its public appearance in 1812…” The two demons, by the way, are personifications of Laplace’s billiard-ball theory of matter (a set of forces which could only be comprehended by “an intelligence which… could know all the forces by which nature is animated”) and James Clerk Maxwell’s insistence that a being with unlimited knowledge would be able to perceive the individual variations which we simplify into uniform states (like cold pockets within a hot zone).

How about three clear sentences on Hegel? Menand has them:

Hegel believed that the Absolute reveals itself not only in nature… but also in history. Reality is an Idea in the mind of the Absolute, and history is that Idea’s gradual coming into consciousness of itself… The idea is always present, but it can realize itself concretely only in the collective consciousness of human beings, and only through time –like (Hegel said) ‘the circle which presupposes its end as its purpose, and has its end for its beginning; it becomes concrete and actual only by being carried out, and by the end it involves.”

I read The Metaphysical Club to situate John Dewey, an author who is the opposite of Louis Menand. Dewey could be clear, but he was constitutionally incapable of writing an interesting or motivating sentence. Influential he may have been, but his writings are dull, dull, dull; a wall-to-wall carpet of utterly numbing dull berber. Menand notes this wryly: “In later years Dewey deliberately adopted an anti-rhetorical style, in the belief that readers should be persuaded by the cogency of the thought rather than the felicities of the prose. He was uncommonly successful in getting rid of the felicities.” And later, citing Henry Steele Commager, “a generation (or part of a generation anyway) seems to have found Dewey’s manner of calmly and often rather colorlessly chewing through received ideas irresistible and indispensable.”

That Menand can make even Dewey interesting is perhaps the ultimate testimony to his power of authorial enchantment. If you’re in the market for an introduction to American pragmatism, read The Metaphysical Club.