Once upon a time in Meowsyland, the cat a-meows-ment park, the cats members were making a plan to eat some birds. They were all cats, you know, and cats love to eat birds.

Suddenly, a tiny bird flew up and landed right in front of the main entrance to Meowsyland.

“Hi,” said the cats, licking their whiskers and getting ready to eat the little bird. 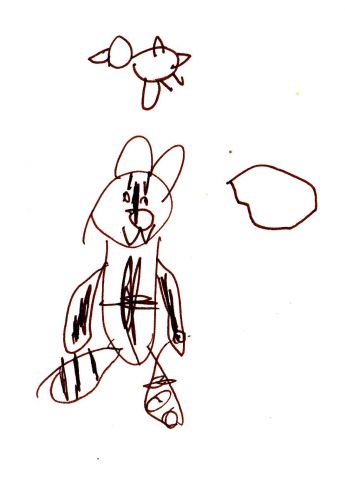 “If you don’t start being nice to us birds,” chirped the little bird, “we will peck your noses with our sharp beaks. And we will drop things on you out of the sky when you least expect it. Do you expect it right now?” asked the bird.

“Not in the least,” said Stripey.

BONK! A heavy candy box fell on Stripey’s head when he least expected it. A couple of big birds had flown over and dropped it. “Well, at least I got some candy from the sky,” said Stripey. But when he opened the box, there was nothing in it except a brick. 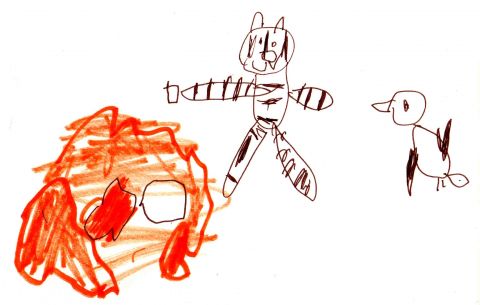 “And furthermore,” said the little bird, “if you don’t start being nice to us birds, we will fan you with our wings when it’s cold, and perch in your trees and make a terrible noise all day and night.”

So the Town Council of Meowsyland got together and decided to start being nice to birds. Grey Crawler had an idea. “Let’s have a special day just for birds at Meowsyland, where they are our special guests and we are nice to them all day and treat them well.”

“That’s a great idea,” said Mayor Stripey. “We’ll call it Bird Tuesday. We’ll make flags and banners. And the motto will be,

WE DON’T WANT TO EAT YOU,
WE JUST WANT TO TREAT YOU!”

So the cats members of Meowsyland put signs up everywhere that birds could see them: the roofs of buildings, the tops of trees, and on top of busses, so flying birds could look down and read the message. 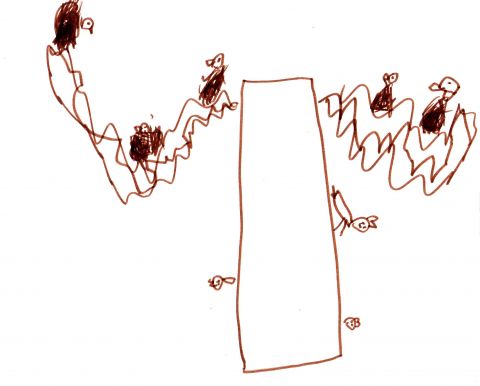 Grey Crawler, who always had lots of ideas, had another good idea: He took a team of the smallest cats on a special mission. They crawled into all the nests of all the birds who lived near Meowsyland, and left little note cards saying, “You’re Invited” and giving all the information a bird would need to know about Bird Tuesday.

They had to sneak into the nests when the birds weren’t there, or were sleeping, because they knew that the birds would not trust them. In one of the empty nests there were some eggs. Grey Crawler left the invitation beside the eggs, and turned to crawl away. But just as he left, he heard a loud “CRAAAACK!” and when he turned around, a brand new baby bird chirped at him. 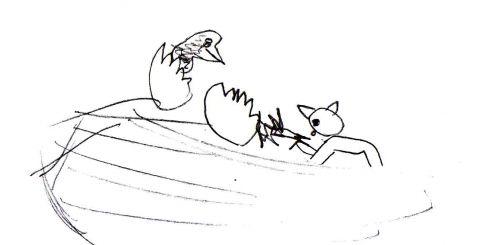 “MEOW MEOW!” said Grey Crawler, which is cat language for, “NO WAY!” Then he tucked the baby bird into the nest and meowed a little lullaby song.

After the bird was asleep, Grey Crawler snuck away.

First thing Tuesday morning, all the cats members gathered at the front gate of Meowsyland for the grand opening of the first Bird Tuesday. But no birds came. The cats members, who had worked very hard to get the ameowsment park ready for bird guests, were very disappointed. One of them even cried a little. 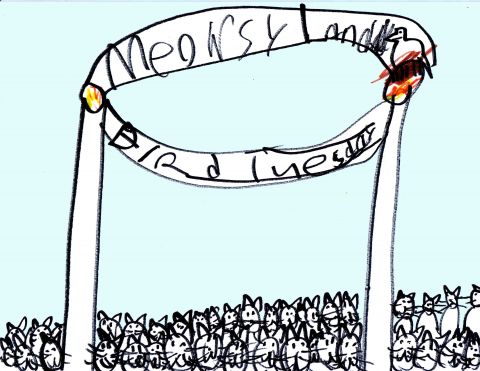 “I guess the birds just didn’t believe us,” said Mayor Stripey. “We promised to treat them, and not to eat them, but since birds and cats are natural enemies, I guess they decided we weren’t telling the truth.”

Just then, the little cat who was crying said, “Look, up in the sky: It’s a bird. It’s a plane. No, it’s a bird. Wait a minute, it’s actually a lot of birds. A whole lot of birds!”

He was right. The sky over Meowsyland was filled with thousand of birds coming to Bird Tuesday. 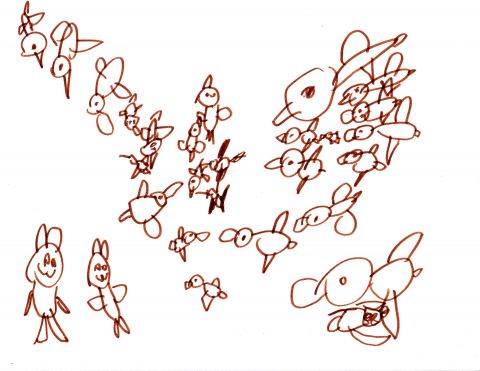 All the cats members jumped up and down and shouted, “Welcome to Bird Tuesday! We don’t want to eat you, we just want to treat you! Meow meow meow!”

The sky was so full of birds that some of them had to arrive in airplanes. The Meowsyland cats helped the airplanes land, which was harder than you might think, because even though birds are great at flying themselves, they’re pretty bad at flying airplanes.

The first Bird Tuesday was a big success. Even though all the a-meows-ment rides were built for cats, the birds were able to ride on them anyway. Most of the birds were a little too small for the roller coasters, and they were certainly afraid to get under the sign with a cat holding up its claw saying, “You Need 2 Be This Tall to Ride This Ride.” 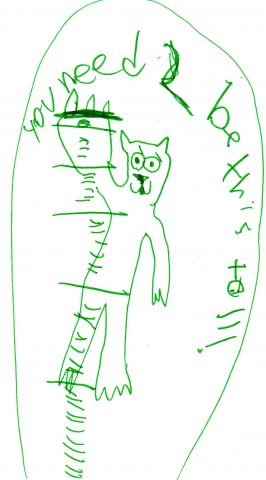 But they figured out that if they fell out of their seats, they could just fly back into them.

They fit on the furris wheel, 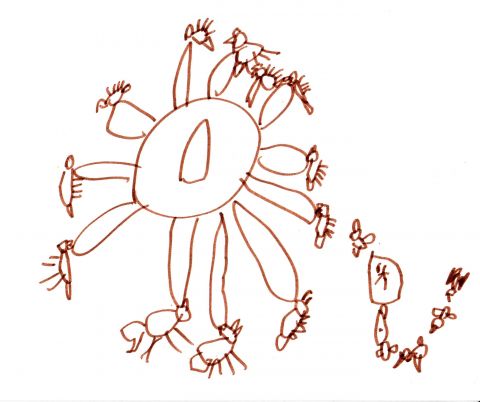 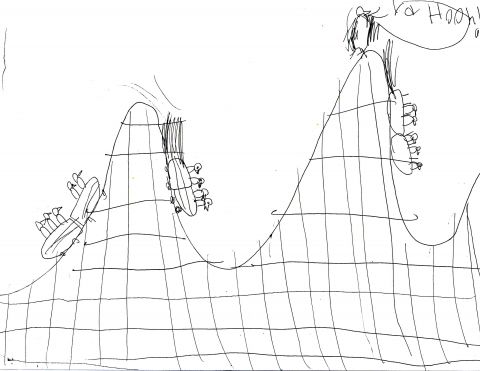 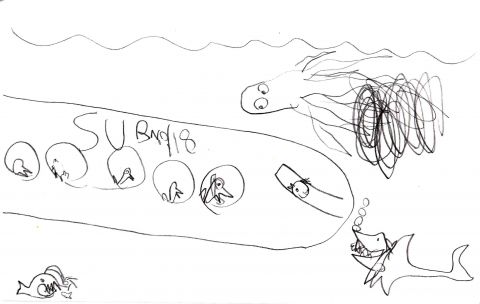 Those birds rode on every single ride in Meowsyland. Most of them did them twice! Before lunch! And speaking of lunch…

After riding all the rides, the birds were very hungry. They went to Meowy McMeow’s restaurant, which is shaped like a giant cat head, with the mouth as the door. You should have seen all those birds, nervously flying into a giant cat’s mouth! 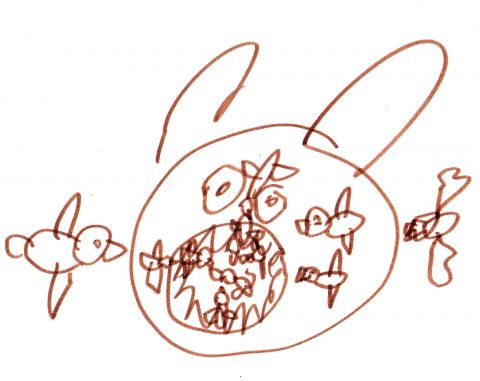 But they trusted the Meowsyland cats a lot by this time, so they flew right in.

Once they got inside, the only food in the restaurant was ground up meat (which you can read more about in the next chapter). “Birds don’t eat ground up meat,” said one brave little bird.

“Well, then, what do you eat?” asked Stripey.

The cats thought this was the most disgusting thing they had ever heard, but they were good hosts, so they went around the room and took orders from each bird. 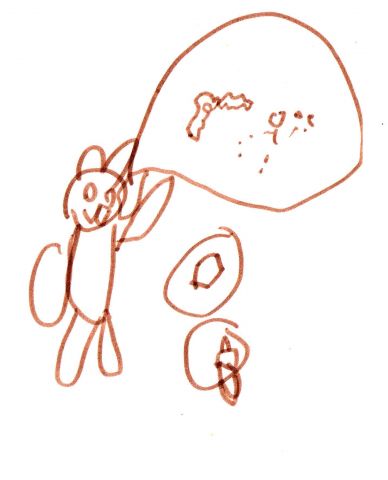 A few of the birds said they ate nectar, but they would be glad to go out and get their own.

The last surprise of the day was that the cat cooks didn’t just serve the seeds and worms; they baked them into a giant pie. 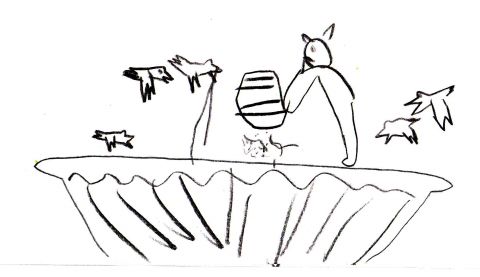 When they were all done cooking it, they looked around for the birds, but couldn’t find them anywhere.

“Cat cooks!” yelled Stripey. “Did you bake the birds into that giant pie? That is not showing good hospitality!”

But the birds were in the pie just to get warm, and to surprise the cats by flying out all at once. When the cats least expected it, they all exploded out and flew around in circles. They landed at their tables and ate as much as they wanted. 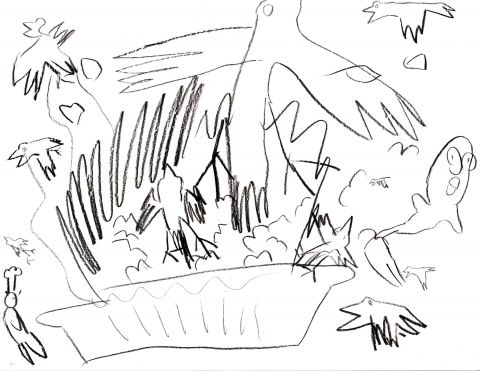 It was the best feast ever on the best day ever for birds and cats to play together. They agreed to do it again… maybe every Tuesday! 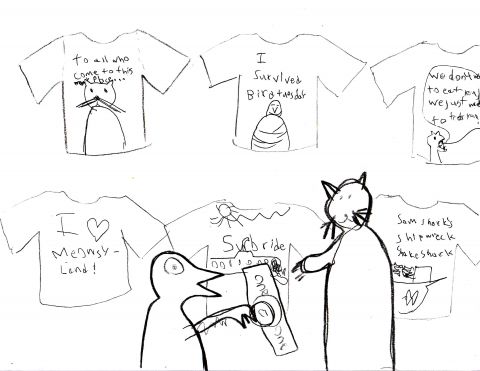 On their way out of the ameowsment park, many of the birds bought commemorative T-shirts. The best selling shirts said, “I SURIVED BIRD TUESDAY,” on one side, and “WE DON’T WANT TO EAT YOU, WE JUST WANT TO TREAT YOU” on the other. But the birds also bought a lot of “I ♥ Meowsyland” shirts, because they did.

(This is the second chapter of a series of bedtime stories I’ve told my kids for a couple of years, which we illustrated this year for a Christmas project. Some of the drawings are by the eight year old, some by the six year old.)