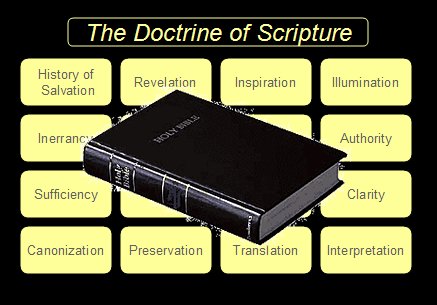 There is a lot of material to cover in the doctrine of Scripture: everything from its deep background in God’s will to redeem us and reveal himself, to the “business end” of the doctrine in providing a user’s guide to the English Bible an ordinary believer holds in his or her hand. In between are topics like inspiration, canonization, inerrancy, and authority. How should all of this information be organized? Specifically, what is the best way of putting it all together for the purpose of teaching it well?

It’s an important question, though there is a temptation to shrug off this preliminary, methodological concern and just jump into the business of teaching all the good stuff. But many of the questions and problems that Christians have in this area are the result of not having a good sense of how the various parts of the doctrine are related. Without a map of the whole territory, we tend to get confused about the significance of the various locations. For example, a lot of people are vexed by questions about the canon of Scripture, when what they’re actually trying to grasp is the issue of the authority of God’s word. Some people push their doctrine of inerrancy to the utter limit of plausibility (by which I mean considerably to the right of the Chicago Statement), to compensate for a lack of specifics in their ideas about inspiration. Some believers feel great anxiety about ambiguity in translations, because they have never reflected on the (larger and prior) doctrine of revelation. Bart Ehrman’s bibliological train jumped the tracks back when he decided that text criticism was the right place to work out all of his objections to the very idea of divine revelation and the existence of God. Again and again, people try to solve their problems in the wrong places, or using the wrong tools.

A major task of teaching the doctrine of Scripture is equipping Christians with an understanding of how the whole territory of the doctrine is laid out. A skillful teacher can help students discover this in a variety of ways as they go along, but a lot of the work can be accomplished by arranging all the material in a way that makes the relationships clear from the beginning. It might be possible for a table of contents and an initial flyover survey to be so clear that the lecturer doesn’t have to keep fending off all questions by saying “we’ll get to that at the proper time.”

Here are three ideas for a happy pedagogical arrangement of the material in a doctrine of Scripture. The goal is a doctrine that can be easily and memorably taught, not just in seminaries but at the congregational level, as appropriate.

1. Scripture in the Economy of Salvation and Revelation. Begin with a description of God’s will to redeem and reveal himself, and move from there to the biblical doctrine of revelation. Revelation is a combination of God’s mighty acts in history with God’s true words interpreting and extending those acts. God does not just carry out actions that make his nature and his will known; he explains them in ideas that he makes known to his servants, and (further) in words that he gives them for those ideas, and (further) in perfect and unerring words. God is both the Lord of salvation history and the publisher of a book on the subject, a book which is itself an important part of salvation history. The flow of ideas is something like: Salvation, revelation, illumination, inspiration, inerrancy, canonization, preservation, translation, interpretation, application.

2. Attributes of Scripture. The Bible, as the word of God, is necessary, sufficient, authoritative, clear, and effective. Other doctrines can be located under these larger headings: the larger doctrine of revelation can be referred to under the heading of the necessity of Scripture; the smaller doctrine of inerrancy can be placed under either authority or clarity, etc. This approach is strong where the previous one is weak (very clear categories), and weak where it is strong (a sense of history and an organic, not merely formal, connection with the gospel). It’s not an inherently motivating way to approach the doctrine, since it is after all just a list (I have eleven reasons why lists are not the best teaching tools). Most of my own thought project as a teacher trying to get this right involves finding the best way to combine approaches 1 and 2 without clouding the outline. I prefer an economy of salvation outline, and then I try to find the right places to insert the attributes.

3. Divine Action and Human Action. Something like the top half of the subjects we need to discuss are divine actions: God reveals himself, inspires words, guarantees truthfulness, providentially preserves the records, etc. At the other end of the doctrine are some subjects which are definitely human actions: translation and publication, for instance. In the middle are a few actions where divine and human action are so tightly connected that both need to be acknowledged properly. The most important instance is the way the very words chosen by God are set forth in words that simultaneously express the human personalities and vocabularies of the prophetic and apostolic authors. A different sort of divine-human connection can be explored in the way God canons his church through his word, and his church recognizes that word as canon. Strengths: Great discussion starter and thought provoker. Weaknesses: Not very satisfying for students who want clear answers, since nearly every step involves some kind of complex divine-human interaction. Even when God writes the ten commandments on stone with his own finger, he apparently writes the words in a human language.

There are several other good organizational options (including a few that have the considerable advantage of being more directly biblical, and consisting mostly in close study of discrete biblical texts), but these are the three that come closest to comprehending all the material I want to cover in a doctrine of Scripture.