Today (March 6) is the birthday of A. T. Pierson (1837-1911), one of the most influential figures in the history of conservative Protestantism. An American evangelical, Pierson had an extensive teaching ministry throughout the English-speaking world; the most famous post he held was that he took over the pulpit of the Metropolitan Tabernacle as C.H. Spurgeon’s health failed, and remained at that post for three years. 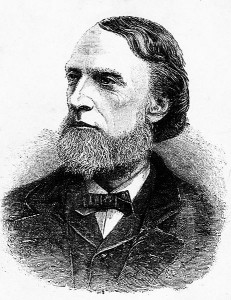 Pierson was an early leader in the great wave of missionary activism that marked the late nineteenth century, and he helped spread the vision. He edited important journals and wrote books with the titles The Modern Mission Century Viewed as a Cycle of Divine Working: A Review of the Missions of the Nineteenth Century with Reference to the Superintending Providence of God (1901) and Forward Movements of the Last Half Century (being a glance at the more marked philanthropic, missionary, and spiritual movements characteristic of our time, 1900). His promotion of missions caught the ear and shaped the vocational decisions of John Mott, Samuel Zwemer, and Robert E. Speer.

Pierson was a great observer of the times, and seemed to be involved in all the most important developments in evangelical action during his lifetime. Aside from his missions work at large, he also had a formative influence on movements like “faith” missions (he wrote the classic biography of George Muller of Bristol), the defense of the Bible, inductive study of the English Bible, evidential apologetics, Keswick spirituality, premillenialism, and pan-evangelical ecumenical cooperation.

In 2003, Dana L. Robert wrote an excellent biography of Pierson, Occupy until I Come: A. T. Pierson and the Evangelization of the World. And all the historians of religion in America, or of evangelicalism more broadly, shouted in unison, “Finally! The unjustly neglected Pierson has received his due!” I recommend Robert’s book highly to anyone who wants to see what evangelicalism looked like in a stronger age.

Pierson’s own writings remain eminently readable. His classic is In Christ Jesus: The Sphere of the Believer’s Life, though the 12 sermons on The Heart of the Gospel are also excellent.