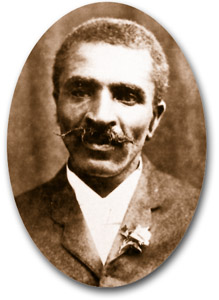 My wife just read a biography of George Washington Carver (subtitled The Man Who Overcame, by Lawrence Elliot (Prentice-Hall, 1966). Like most biographies of Carver, this one is out to edify and inspire the reader at all costs, and the lessons do come flying out of it pretty fast. I know it’s sophisticated in these jaded days to be more deflationary about Carver’s reputation (“he didn’t really invent 300 different uses for the peanut, some of them were duplicates”), but the fact is that even if you divide by three and subtract 40, this man still had an amazing life and trampled down obstacles that I can’t imagine overcoming. The sad fact is that you CAN keep a good man down if you just pile enough on him. But Carver didn’t stay down.

Carver developed a homespun religious philosophy and told little stories that catch the imagination. One story has him crying out to God, “Oh, Mr. Creator, why did You make the universe?” to which God replied, “You want to know too much for that little mind of yours. Ask me something more your size.” So he tried “Dear Mr. Creator, tell me what man was made for.” Still too big. Finally: “Mr. Creator, why did You make the peanut?”

Thats better! the Lord said, and He gave me a handful of peanuts and went with me back to the laboratory and, together, we got down to work.

This way of talking about scientific investigation as a kind of cooperation with God got Carver into some trouble. He would intentionally conflate a purist inductive observation with divine inspiration in sayings like “No books ever go into my laboratory. The thing that I am to do and the way of doing it come to me. The method is revealed at the moment I am inspired to create something new.” A tone-deaf press got the story all wrong, according to the Elliot biography, and ran headlines like “Divine Secrets Revealed to Negro.”

Carver just had that poetic streak you find in so many of the nineteenth century nature writers and early twentieth century scientists. Leaving God out of the picture for once, Carver would say “Look about you. Take heed of the things that are here. Talk to them. Soon you will hear them talking to you.” (Imagine the headline from that one!)

One of his favorite metaphors was the fact that radio waves were carrying inaudible music around us all the time, but the only people who can benefit from it are the ones who can tune into it. He talked about creative insight into the natural world as a kind of “tuning in” to what’s there all along, just waiting for us to become receptive. And above all, he thought of this tuning in as happening in prayer. He asked God to show him what the peanut is for. To be honest, the more Carver I read, the more I worry that he outgrew the faith of his youth and drifted toward an increasingly vague reverence for creation. But one thing his intentionally quaint pop theologizing puts in front of us is the fact that God has ideas and understanding, and the way to get them from his mind into yours is to ask. Pray for ideas. Go to the peanut and consider its ways.