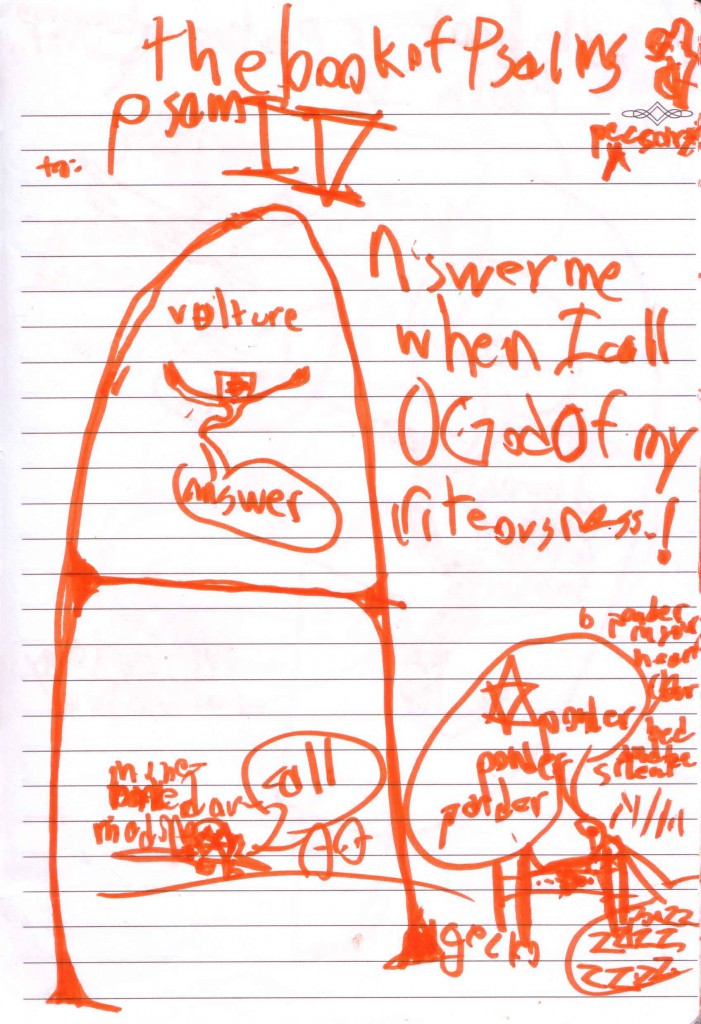 Following a medieval tradition, Freddy Age Nine has taken the first letter of the Psalm (A is for “Answer me when I call”) and made it the architectural center of the composition. The A is not only the largest shape on the page, but also includes the largest fields of solid orange (in the serifs and cross-strokes), which draw the eye.

The power of the giant A can be accentuated even more if we isolate it from the surrounding elements: 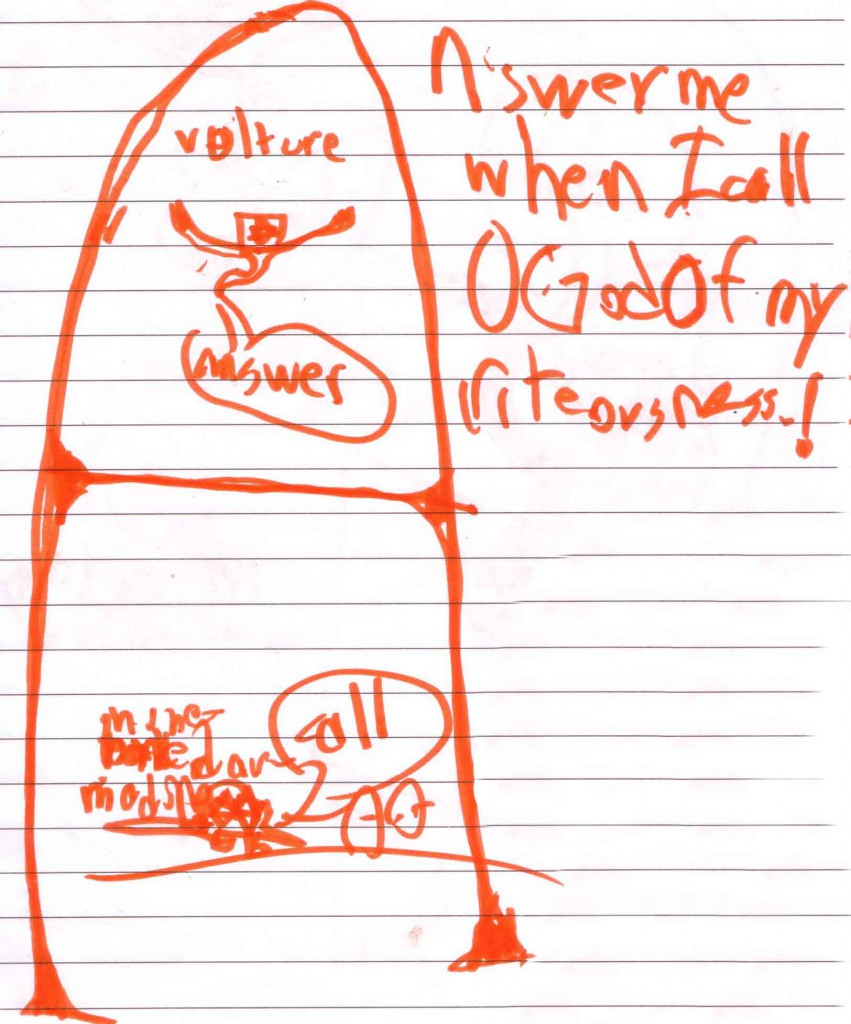 “Answer me when I call” is a primal statement of prayer; a prayer about prayer itself. Freddy Age Nine exploits the spaces trapped inside the letter A to make this call-and-response structure of prayer even more explicit. The psalmist, in the space below, calls out to the God in the space above, who answers.

The Psalmist is portrayed by a nine-banded armadillo. This little character made his first appearance as a marginal decoration in the psalmtoon of Psalm 3 (second page, top corner). But beginning now, the armadillo will represent the Psalmist consistently in drawings by Freddy Age Nine. 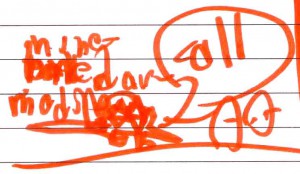 A small armadillo does not have the broadest expressive range imaginable, but he will prove to be remarkably versatile in coming Psalms. Here in Psalm 4 he is a bit blotchy and hard to decipher. Even the most devoted fans of Freddy Age Nine can admit that his bravura rendering style did not result in an especially readable image this time. He can really throw the orange ink, though! And the Psalmist’s call is hard to beat: “Call,” he says. 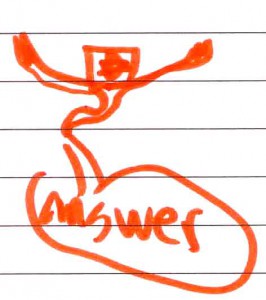 As for the God who answers, for now he is represented by a vulture. The artist has limited himself to desert animals for his cast of characters, so a desert vulture is a fairly reasonable choice, as long as you don’t think about it too hard. In future Psalms, we will see Freddy Age Nine set this character aside in favor of a more satisfying representation of the God of the Psalms. This vulture will do for now, though. “Answer,” he says to the Psalmist.

Since the eye reads a page starting at the top and descending to the bottom, this page’s layout shows God answering before the Psalmist calls. Yet it is an illustration of the verse, “Answer me when I call.” The composition, therefore, subverts the order of the sentence, and shows God preveniently present before the Psalmist takes the initiative of calling.

Outside the frame of the A, the artist has isolated one verse, Psalm 4:4: “Ponder in your own hearts on your beds, and be silent. 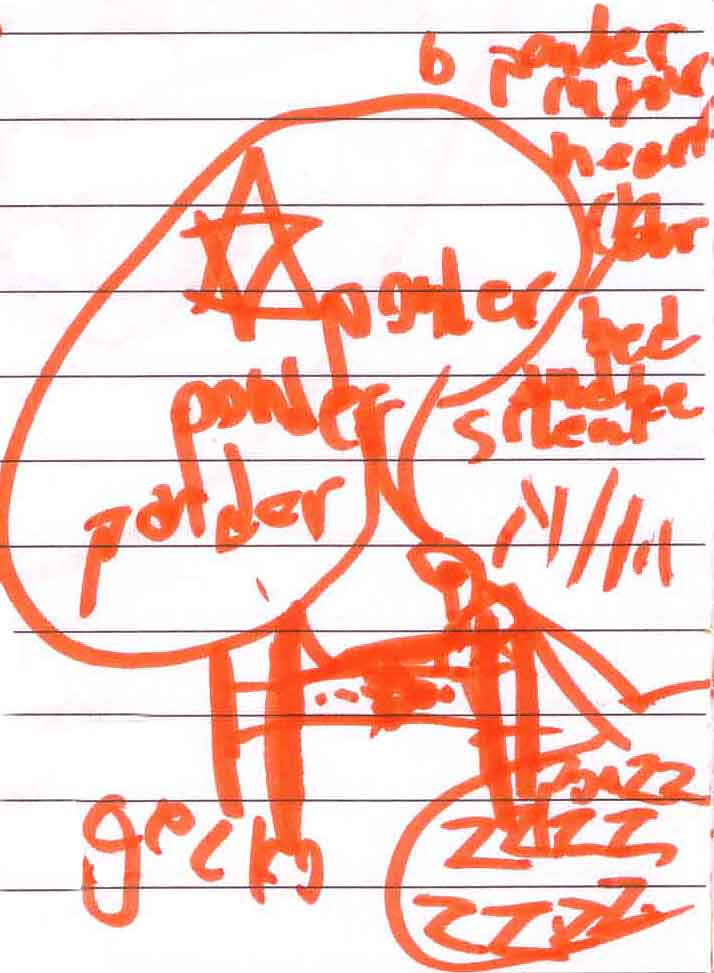 The verse is explicated with a masterful combination of word and image: The Psalmist in this case is represented by a Gecko reclining in a bed. Behind him are the words of the verse,and in front of him is his own large word balloon, projecting from his forehead: PONDER PONDER PONDER. The word balloon also includes a star of David, which Freddy Age Nine uses frequently in psalmtoons to signal that the speaker is the Psalmist, a son of David. But the star is also on the vulture’s tail, indicating that they belong together.

Below the Gecko is a little species label, and behind him is the appropriate response to PONDERing in his heart on his bed: ZZZZZZ ZZZZZZ ZZZZZZ.