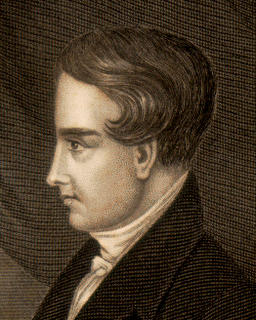 Robert Murray M’Cheyne was born today, May 21, 1813, and died in 1843, having barely made it to age thirty, and having been in the ministry (at St. Peter’s Church in Dundee) for a little over six years. There are two reasons his short ministry is still with us.

First, M’Cheyne was happily placed between good predecessors and good successors. His mentor was Thomas Chalmers, a one-man reformation in the life and thought of the Scottish church. Like many students who came under the spell of Chalmers, M’Cheyne worked with a confident sense that the big decisions had already been made and now all the nation needed was enough faithful men to carry out the plan. As for successors, when M’Cheyne died, the redoubtable Andrew Bonar gathered up everything he could and published a 700-page tribute, The Memoir and Remains of R. M. M’Cheyne. It includes a short biography from his journals, 61 letters, 28 sermons, some articles and hymns. It is this volume that most people mean when they talk about the works of M’Cheyne. So those who went before, and those who came after, kept his short work from falling out of notice.

The other reason is more important: His ministry is still with us because it was such a model of Christian ministry. It is hard to name the main characteristics of M’Cheyne’s work without sounding corny: He was so conscious of God’s grace toward him that he served others by bringing them a constant testimony of the simple love of Jesus. One of his friends said of him, “few ministers preach with the fervour, the Christ-exalting simplicity, and the prayerful expectancy of Robert M’Cheyne; and few follow out their preaching with the yet more impressive urgency of his gracious intercourse and consistent example.” If this be corny, let us make the most of it.

You may have heard of M’Cheyne because of his daily Bible reading plan, which he called “Daily Bread” and most of us call “The M’Cheyne Reading Plan.” It is a schedule he designed for his flock, which has proven itself through the years as striking a perfect balance between high standards for personal devotions on the one hand, and realism about what busy people can get done on the other. High standards: It takes you through the entire Bible in a year (Leviticus, Obadiah and all), plus the New Testament and Psalms twice. Realism: It takes four chapters per day, and comes in the form of a chart that removes in advance the obstacle of having to plan the day’s reading.

Always sober and watchful, M’Cheyne warned his congregation of the dangers attending this sort of regularity in Bible reading:

*Formality, or “skeleton religion.” “Let the calendar perish rather than this rust eat up your souls.

*Self-righteousness about your great devotions. “This is going to hell with a lie in the right hand.”

*Careless reading. “Few tremble at the word of God,” and a large portion may lead to weariness.

*A Yoke Too Heavy. If this is too much Scripture, cast off the yoke and “feed at liberty in the sweet garden of God.”

But M’Cheyne also pointed out the advantages of the system:

*The whole Bible, in an orderly manner, in one year.

*No time wasted in selecting the day’s portion. “Often believers are at a loss to determine towards which part of the mountain of spices they should bend their steps.”

*Something to talk with the children and friends about. Family worship can be centered on a common text.

*The pastor and the flock on the same page.

*We will experience the bond of Christian unity. “We shall pray over the same promises, mourn over the same confessions, praise God in the same songs, and be nourished by the same words of eternal life.”

My church recommends the M’Cheyne reading plan, and makes handy little booklets available. Many members of the congregation (including my wife for several years) are working through it at any given time, all on the same page (like a liturgical lectionary would do) and covering the entire Bible (unlike a lectionary).

My favorite way to get the M’Cheyne plan is by e-mail, through a no-frills service that puts the day’s readings, in the ESV, in my inbox every morning at 2 am.