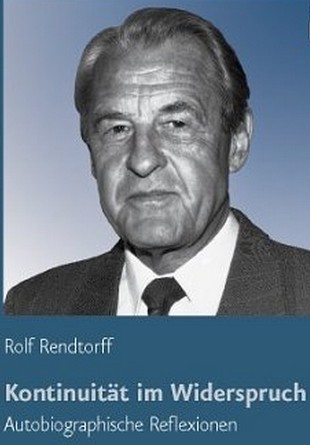 Old Testament scholar Rolf Rendtorff died this week.  Rendtorff spent most of his career at the University of Heidelberg. He was a diligent scholar who was able to pursue the largest questions in his field without losing his grip on all the details. He had a knack for biblical exposition that kept his work fairly readable even when the content was demanding and abstract.

In his early work, Rendtorff was identified with something called (by publicists, at least) the Pannenberg Circle, a group of young guns at Heidelberg in the late 1950s who shared an interdisciplinary project of drawing theological implications from the modern notion of history. Gerhard von Rad, with his insights into the continuity and tradition that brought about the Old Testament, was the inspiration for their collaborative work; while a young Wolfhart Pannenberg served as the systematic impresario. Another participant was Rolf’s brother Trutz (b. 1931), a theologian who would go on to teach for years at Munich.

In publications like Revelation as History, the Pannenberg Circle developed von Rad’s “history of the handing on of traditions” into a full-blown account of universal history as the way God is made known. In Pannenberg’s hands, this required attempting to render Hegelian metaphysics compatible with orthodox theology. The project was partially motivated by a desire of the rising generation to get beyond the more word-and-encounter-centered approaches to revelation that dominated the theologies of Barth and Bultmann. Obviously, that’s a wide-ranging theological agenda. But it’s interesting that the initial spark came from the Old Testament theology of von Rad, and as the resident Old Testament scholar of the group, you might expect Rolf Rendtorff to be the one who carried forward the initial ideas most directly. But if he did so, it was in an oblique way: his own contribution to Revelation as History was a study of the Old Testament concept of revelation, in which he stressed that God makes himself known through mighty acts of deliverance, and that from the point of view of the prophets, the full revelation of God is “still to come.” This was not quite enough of an Old Testament foundation to build the whole theological edifice of Revelation as History on, but it was at least working with the same basic themes.

Rendtorff became increasingly interested in Pentateuchal origins, also along lines opened up by von Rad. Old Testament criticism was long dominated by the documentary hypothesis, the idea that we can discern the original sources of the Bible’s composite texts: J, E, D, P, etc. Von Rad (along with Noth and others) had opened a new line of research, drawing out the historical trajectories of the handing on of traditions (the überlieferungsgeschichte) that spanned multiple books of the Old Testament. Most Old Testament scholars saw these two forms of analysis as supplementing each other. Rendtorff increasingly came to see the traditio-historical analysis as not only more significant, but also as contradicting the documentary approach.

Mainstream Old Testament scholarship does not see the two methods as dichotomous, but Rendtorff pressed his view insistently: you can have the history of traditions, or you can have the documentary hypothesis, but you can’t have both. He advocated the history of traditions approach, and was not at all sad to wave goodbye to Wellhausen and company. Here is one of his laments over what becomes of the Bible under what Erhard Blum called  the “Systemzwang der Urkundenhypothese” (the pressure of the system of the documentary hypothesis):

What we now have before us is not one Bible but a number of texts, reconstructed by modern scholars, cutting the Bible into pieces by “taking the Biblical text apart.” But what happened to the Bible itself? What happened to the text as it has been delivered to us through more than two thousand years? It seemed to me to be one of the fundamental mistakes of the modern historical-critical analysis of the biblical texts that it does not — or at least not sufficiently — ask the question, what is the meaning and significance of the given text.  …the biblical text itself in its given form is not at all taken as a subject of scholarly interpretation. I believe that this cannot be the last word of scholarly Bible exegesis.

That is from a late essay (written in 2006) in which Rendtorff wryly traced the attempts of many scholars to prop up the imaginary  “Yahwist” as an author, or redactor, or post-exilic historian, or anything they can salvage from a theory in disarray. He concludes that there is now a loose consensus that the Yahwist has evaporated (others have observed that “in Old Testament scholarship, comprehensive theories of the Pentateuch seem to have a life span of about one century”); Rendtorff moves beyond the consensus by insisting that if the Yahwist vanishes, the documentary hypothesis is left with only one document and not much of a hypothesis: “What happened to the Yahwist? The answer: He faded away, and he took with him the building he had lived in because there are no inhabitants any longer.”

You might guess that with his appeal to “the biblical text itself in its given form,” Rendtorff would align with some kind of canonical approach to Old Testament scholarship. And indeed, his own Old Testament theology is called The Canonical Hebrew Bible. He makes some characteristic canonical moves like beginning his theology of creation with Genesis 1 and 2, rather than rooting around in later texts to get the story behind the story; that is, he assumes that the right place to start is at the beginning (though he brings in later sections to present a comprehensive account). That’s very different not only from the documentary approach, but also from the way other scholars have applied von Rad’s history of traditions approach.

Rendtorff was no maverick. He was a distinguished scholar involved in the major societies and conversations, and taken seriously throughout the discipline. But in many ways he followed his own judgments, went his own way, and took positions that were hard to fit into the available categories. He excelled at the short essay, which may increase the likelihood of his influence enduring beyond his passing. But it’s hard to identify any organized community of scholars that will continue to champion the set of positions he staked out, or carry through his proposed alternative to the dominance of the documentary hypothesis of Pentateuchal origins.