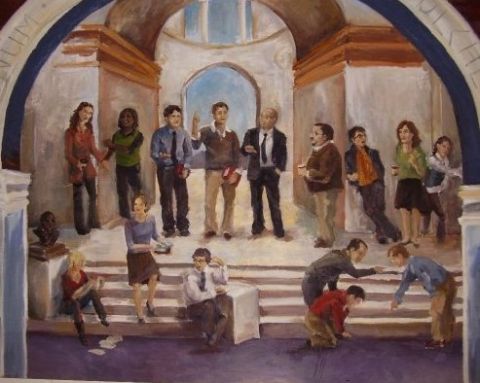 Scriptorium Daily has been an active and successful web publication in 2008. We’ve added more bloggers to the team, and together we’ve posted with a regularity that almost justifies our name. Our hit counts, subscriptions, and e-mails suggest that lots of people are appreciating what we do here, which is nice, since so much of what we do is to amuse ourselves and stay in touch with friends and alumni, because everything on this site is some kind of by-product of the intellectual and spiritual life happening at Biola’s Torrey Honors Institute. It’s also nice to see that the kind of posts we’ve been publishing this year are pretty consistent with what we did throughout 2007.

So here are my picks for the best things we’ve done in 2008.

20 Things I Have Learned as a College Professor (08.11.2008)
Paul Spears’ quick list of highlights from his continuing education became a bit of an online phenom, thanks to the magic of stumbleupon and facebook. People passed this post around by the tens of thousands.

Pity for a Devastated Wall Street (09.17.2008)
At a time when it was easy to moralize about the greed and pride that preceded the financial fall, John Mark Reynolds noted that pity was a more proper response for the real suffering generated by the crisis. Another popular post for people to forward, this one was also picked up and republished by Christianity Today’s website in October.

The Bible Women (03.03.2008)
Fred Sanders excavates a little bit of the forgotten history of Biola-style evangelicalism from the early twentieth century. This article told the story of a special group of consecrated women who carried out an ambitious program of evangelism and discipleship. In Biola’s centennial year, Sanders also wrote about Biola’s first female Bible teacher, Anna L. Dennis, and about R. A. Torrey’s ministry of producing The Gist of the Lesson.

What It Means When Christians Say, “Jesus Is Lord!” (09.08.2008)
John Mark Reynolds has taken up the task of interpreting Christianese to a quickly-secularizing culture. In this post, he translates the phrase “Jesus Is Lord:” It doesn’t mean that they are “forming militias to get ready for a theocracy governed by Biblical law?” It means they are going to pray, read their Bibles, and obey the will of God as they understand it. This year, Reynolds also applied his bilingualism to a particular case in his post On Reading Old Books, Especially the Bible, and to a hot current event in his post on Understanding the Palin Prayers.

By the Book (08.25.2008)
Melissa Schubert is a careful reader of Scripture and of the kind of Reformation theology set forth in the Elizabethan Homilies. In this post, you get to hear a literature professor offering her own “Fruitful Exhortation to the Reading of Holy Scripture.”

Worldview Anomalies, Recalcitrant Facts and the Image of God (04.21.2008)
J. P. Moreland’s Scriptorium posting slowed down to monthly installments this year, but when he writes, people read. His best post of 2008 showed how human nature (consciousness, free will, the self, rights, dignity, psychological phenomena like depression and its cure) is something that just keeps raising challenges to a naturalistic worldview. “A theory may explain some facts quite nicely. But a recalcitrant fact doggedly resists explanation for a theory. No matter what a theory’s advocate does, the recalcitrant fact just sits there and is not easily incorporated into the theory.”

Should I play Grand Theft Auto? (05.02.2008)
John Mark Reynolds asks an honest question and gets two kinds of hate mail: Both kinds ask, “Why would you even ask that question?” This post goes well with the follow-up post, More on Grand Theft Auto: Bad Reasons for me to Play

Proud to be Protestant (10.31.2008)
On Reformation Day, Greg Peters takes a moment “to glory in the fact that I’m both Anglican and Protestant.”

On Viewing a Body (03.10.2008)
After a funeral, Matt Jenson reflects on the strange truth that the dead bodies of loved ones still seem to be loved ones, even when we know all the right theological truths. “To be human is to be a body. It may be more than that, but never less.”

Theological Saint-Watching (05.19.2008)
Fred Sanders, getting ready for a big summer of reading Athanasius, Bunyan, Edwards, and Simeon, recommends paying attention to conspicuously holy lives if you want to be prepared to think well theologically.

Charles Simeon of Cambridge (07.14.2008)
Fred Sanders shouts UNJUSTLY NEGLECTED several times to draw your attention to one of the greatest preachers in evangelical history.

Shame on You (06.30.2008)
Paul Spears on the place —proper and improper— of shame in motivating us to accomplishment.

On Christianity and Culture (05.20.2008)
John Mark Reynolds stakes out a position on how culture is influenced by religion, taking issue with the position of Christopher Hitchens.

Catholicity, Race, and Sunday Morning (01.21.2008)
Matt Jenson on Martin Luther King Day with some timely reflections on the voluntary segregation of church services.

Assurance: Anchored in Jehovah (12.08.2008)
Fred Sanders explores the doctrine of assurance of salvation, and recommends grounding it in a trinitarian account of what the gospel is.

Go On, Agree With God (03.24.2008)
Fred Sanders regrets being mean to that one kid back in the 1970s, and learns something about the difference between clever tricks and plain old sin.

On Knowing God: The Top Twelve Books (02.07.2008)
Fred Sanders recommends the best reading in theology: it’s our curriculum, of course. Don’t miss the follow-up post in which a reader sent me links to free online sources for most of the books.

Socrates and Education (02.12.2008)
John Mark Reynolds digs into the pedagogical programs of Socrates and Plato: “It might be that no one person could teach, but that many persons together could find the right questions.” This post is probably an excerpt from Reynolds’ forthcoming book, When Athens Met Jerusalem.

California and Thank-A-Mormon Day (11.05.2008)
John Mark Reynolds, after several good posts on marriage in general throughout the year, and on Proposition 8 leading up the election, gives credit where credit is due.

The Prodigal Holiday: Thanksgiving (11.24.2008)
Melissa Schubert asks and answers: “What does pigging out have to do with giving thanks?”

The Life of Jesus in Paintings at the Getty (04.23.2008)
Fred Sanders, in a heavily illustrated post, reads the meanings of several religious paintings in the collection of the Getty Center in Los Angeles.

Best Guest
Craig Hazen, director of Biola’s graduate program in apologetics, posted his review of Bill Maher’s Religulous here at our site, and also promoted his latest book, Five Sacred Crossings. Keep it up and we’ll have to make one of those faceless cartoons of you, Craig.

Best Satire
Fred Sanders wrote A New Type of Christianity is Coming, Is Here and posted it even though he was worried that it might be a little too sarcastic towards emergent churchers. But then he and Reynolds both got in trouble with people who thought we were seriously advocating some newfangled movement called New Type.

Best Series
Early in 2008, John Mark Reynolds wrote nine posts on beauty, ranging far and wide over the subject and drawing plenty of practical applications. Outside that series, Reynolds also connected beauty to a proof for God’s existence.

Best Political Post:
John Mark Reynolds dominated this field for Scriptorium nearly unchallenged in 2008, and has even positioned himself as cultural observer for the On Faith section of the online Washington Post. During the political season he dared to make predictions, live-blog debates, stake out positions, and have a good time doing it. The post that showcases his abilities best is the zippy little One Sentence Impression for Each Candidate, followed by the self-aware warning about Political Addiction Syndrome.