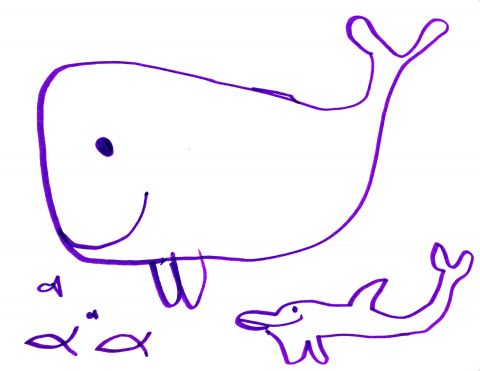 The contour line, says Kimon Nicolaides in his classic book The Natural Way to Draw, is where the seeing eye meets the touching hand. A drawing made with a contour line is a drawing that touches the edge of the object represented, but touches it by proxy, with a marking instrument on paper. “Place the point of your pencil on the paper. Imagine that your pencil point is touching the model instead of the paper. Without taking your eyes off the model, wait until you are convinced that the pencil is touching that point on the model upon which your eyes are fastened. Then move your eye slowly along the contour of the model and move the pencil slowly along the paper. As you do th is, keep the conviction that the pencil point is actually touching the contour. Be guided more by the sense of touch than by sight. THIS MEANS THAT YOU MUST DRAW WITHOUT LOOKING AT THE PAPER, continuously looking at the model.”

Freddy Age Seven hasn’t read Nicolaides, but he is an artist with a highly refined tactile sensibility. He also hasn’t touched a whale or a dolphin, certainly not with the kind of attention recommended by the drawing master. But this drawing reveals that he knows the secret of contour drawing. In this spirited drawing, he has used a purple marker to follow the contours of a whale and a dolphin with close attention to their tactile shape. In the case of the whale, Freddy Age Seven has managed to complete the contour study while still suggesting the overall shape of the animal –though to do so, he had to allow himself the liberty of adding the fins in a later movement. The dolphin, however, is more of a pure contour study, from dorsal fin to flippers, from flukes to beak. He loses something of the balance and proportion of the animal’s outline, but the undulating purple line is attentive in its description of the creature’s contour.

This artist was surely convinced that the marker was touching the model, and so it was.