It’s one thing to see an artist’s finished works hanging in a gallery, and another thing to live with an artist and see works in progress. When you live with an artist, you never know for sure which bits of clutter might be art, or how to tell the difference between a preliminary sketch and a finished piece. Take this drawing for example: 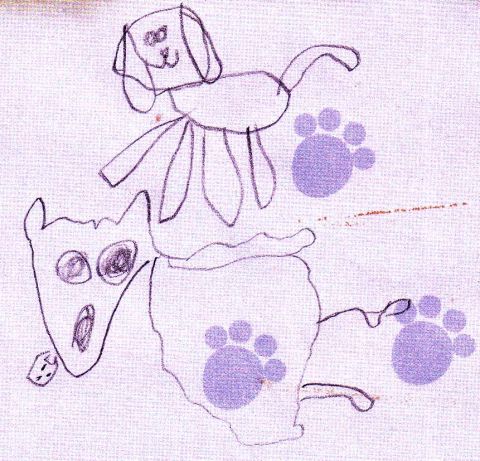 It is a recent work by the artist Phoebe Age Six (aka PA6). At the top of the image is a dog drawn in PA6’s mature style: a minimal number of simple forms repeated and rearranged for maximum effect. The basic visual unit of the drawing is a kind of link sausage; a wobbly elongated elliptical form. PA6 uses eight of them for the dog’s legs, tail, ears, and body. All that remains is the stylized smiley face.

But below that classic dog is another image, also dog-like, but not obeying PA6’s general stylistic restraints. Where, for instance, is the clarity and forcefulness we have come to expect in the handling of quadruped legs? This second animal probably has four legs, but they cannot exactly be counted. And his facial expression is uncharacteristically impenetrable.

The paper substrate is purple, and has three pre-printed paw marks on it. This is the clue that first helps us account for the oddities of the image. PA6 is not simply drawing, but is responding to a readymade image. This piece, if it is to be considered as a finished work, is equal parts “found object” and original composition.

Indeed, this is the case. Here is the full context of the image as I discovered it in the studio space: 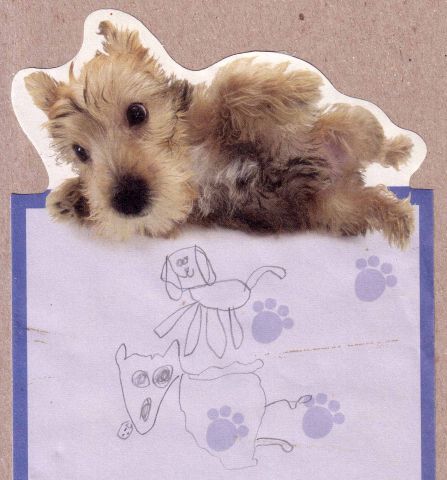 Ah, the substrate is in fact a terrible notepad from the 99-cent store, and PA6 has imitated the sprawling puppy figure in her own style. But the questions remain: was it idle sketch-pad mimicry, or is the drawing intended as commentary on the dog photograph above?

In short: Is it art?