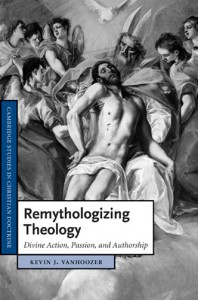 Cultural critic Neil Postman wrote two books whose titles picked a fight with each other: Teaching as a Subversive Activity (1971), and Teaching as Conserving Activity (1982). Well, which is it, teacher, are you subverting or conserving? I ask because I’m coming to terms with Kevin Vanhoozer’s Remythologizing Theology, which similarly looks in two directions at once. It subverts to conserve.

To be more precise, Remythologizing subverts recent developments in order to conserve classical theological positions. In this book, Vanhoozer is plotting the overthrow of recent orthodoxy.

I say “plotting” as a Vanhoozeresque pun, because “plot” is the primary meaning of the root word “myth” in this project. “Mythos is Aristotle’s term for dramatic plot: a unified course of action that includes a beginning, middle, and end.” (p. 5) To plot the overthrow of recent orthodoxy is to correct recent theological trends by paying more disciplined attention to the unified course of action (the plot) carried out by God in the Son and the Spirit, and recorded in the pages of Scripture.

What Vanhoozer chronicles in Remythologizing is the rise of a new kind of theism (a particular doctrine of God), which he gives the appropriately unwieldy title of “voluntary kenotic-perichoretic relational theism,” (175) or sometimes “voluntary kenotic-perichoretic relational panentheism” (297) or v-k-p-r ontotheology. Stated most broadly, it reaches as far back as Spinoza and is as recent as open theism and the latest transmogrifications of process theology. It is apparently what almost everybody in academic theology thinks now about how God relates to the world.

By assigning an almost comically long and awkward name to this diffuse trend in modern theology, Vanhoozer accomplishes a couple of things. First, he makes the doctrine seem like a difficult construct. This is a nice rhetorical feat. The advocates of relational panentheism usually present it as the common sense view, suggesting that anyone who ever prayed to the living God was presupposing relational panentheism, while only a seminary student could ever read enough theology to think of God any other way.

Second, he throws erudite adjectives at the thing until something sticks. If you’ve read anything in modern theology, one or two of those half-dozen terms will ring a bell and let you know what body of literature he’s addressing. This approach works well because, after all, Remythologizing is high-level theology intended for an audience that has already read a lot of theology. If it’s not for beginners, that’s not because Vanhoozer’s writing is too difficult. He’s consistently a clear and engaging writer. But he’s joining the conversation in the middle, and much has already been said. He’s commenting on vast quantities of other books. So calling the movement kenotic-perichoretic relational et cetera accomplishes much. I would have called it “gooey theism” or “the codependent God,” but Vanhoozer’s approach is more helpful.

One way to figure out this kenotic-perichoretic relational stuff is to consdier what its opposite is. This trend of thought has been developed in self-conscious opposition to “classical theism,” that long-standing central Christian tradition of biblical theology elaborated in critical collaboration with greek metaphysical concepts and vocabulary. While admitting that the older tradition had some problems, Vanhoozer tends to call the older tradition at its best “biblical-theological classical theism.”

But as Vanhoozer argues, the widespread, deconstructive “fear of Greek-think” (90) throws out the baby with the bathwater. A sympathetic reading of the church fathers, medievals, and reformers shows that they were hardly captive to Hellenistic categories. Though using them, they pressed through them at crucial points and made the categories serve the new message.

Greek philosophy affirmed ‘that which is,’ but church theology affirmed ‘he who is’ and discovered ‘who he is’ and ‘what he is like’ thanks to ‘what he has done’ in Israel and in Jesus Christ. The God of what we may call biblical-theological classical theism is neither indifferent nor apathetic but ‘with us’ and ‘for us.’(p. 93)