For many, the famous English carol “The Twelve Days of Christmas” is lost on them. This became clear to me one rather cold evening on January 2 of last year, when I was at the checkout stand at a CVS drug store. After I made my purchase, the kind clerk wished me a “Happy New Year”, and I responded with “and Merry Christmas”. She looked at me with some befuddlement, and I think I know what she was thinking. Her look communicated something like this: “You poor, ignorant, kind and gentle fool! That was eight days ago”.

I can certainly understand her confusion, for it is a common one. For many of my fellow Americans, Christmas begins after Thanksgiving. Whichever Thursday on the calendar that quintessential American movable feast occurs, we see Christmas decorations come out with a vengeance. Christmas carols and “Christmas” parties follow thereafter. Celebration, singing, Christmas trees, holly and ivy, frantic shopping—this characterizes the month of December, until December 25. December 26 is considered a “discount day” at many malls around the country, one of the big high holy days of American consumerism. On the 26th of December, Christmas carols cease, and some even take down their decorations. The next big thing: New Years parties. Any further mention of holiday cheer has gone by the wayside.

This is sad indeed, considering that Christmas, like the Advent season that precedes it, is a season all its own. When most people are finished with it at midnight of the 26th of December, in reality the party is just getting started, and it’s a whole twelve days of jolly-making and good cheer. Our ancestors knew this, and perhaps too well. 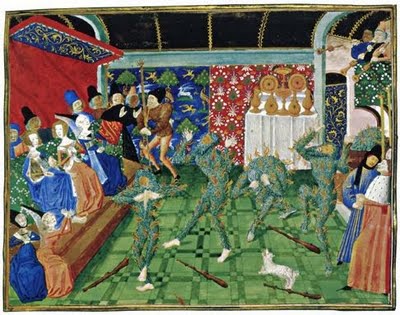 In medieval and early modern England, where many of our Christmas traditions were birthed and developed, Christmas was a twelve-day spectacle that  came closest in its revelries to our own Mardi Gras celebrations in New Orleans. For those twelve days, the whole feudal social order seemed to be overturned, as bands of singers, or carolers, would come to the homes of powerful dukes, sing their Christmas ditties, and then demand entrance into their homes. The nobility, of course, were obliged, for these twelve days, to grant their requests. Overseeing these twelve days of Christmas revelries was the “Lord of Misrule”, usually a poorer member of the city or a local peasant, or a subdeacon, one of the lower orders of the Church. The carols Wassail and We Wish you a Merry Christmas give us some glimpse of the nature of this twelve-day social upheaval. Consider the verses of the latter carol, with its demand that the master of the house “bring us some figgy pudding”, enjoined with a mild threat: “We won’t go until we get some.” All of these festivities culminated on Twelfth Night, the eve of Epiphany (January 6). In many places, it was on the eve of Epiphany that gifts were usually given.

Today, our celebrations are much more tamed, but we seem to have reversed the whole cycle of celebration. The Advent season, beginning on the Sunday on or closest to the feast of St. Andrew (November 30) began a season of fasting, which ended on Christmas Day, whereupon the twelve-day revelries commenced. Today, most people, after having had their turkey, begin the Christmas festivities thereafter, ENDING on Christmas Day. While not quite a reveler on the high scale of our medieval forebears myself, I think I rather like the former way of doing Christmas better.

So what will you see me doing from December 25 to January 6? I will be jolly, and bid a hearty “Merry Christmas” to every man, woman and child, wishing them all the blessings of our Incarnate Lord upon them and their homes, and perhaps having a bit of “Bishop’s Punch”, a nice Dickensian treat.

Anyone want to crown me “Lord of Misrule”?

Merry Christmas to you all—all twelve days of them!

Mr. Coulombe’s latest offering on Taki’s Magazine takes as its starting point the recent bill signed into law by our “undead” governor and moves on to explore a more fundamental issue about illegal immigration: the culture of “self-indulgence and sloth” espoused by the Anglo elite. In the words of the new Archbishop of Los Angeles: “We have an elite culture—in government, the media and academia—that is openly hostile to religious faith.” Hispanic America’s growth must be seen in this context.

Warning: If you have a stomach for honest self-inquiry, then read on. If you agree that a nation that cannot control its borders has relinquished its right to be independent and sovereign, but at the same time that the problem for the choices we have made in rejecting our spiritual nature has contributed to the problem, and we have only ourselves to blame for that–not Jose or Pablo–then read on.

Here is the link. Read, if you dare.