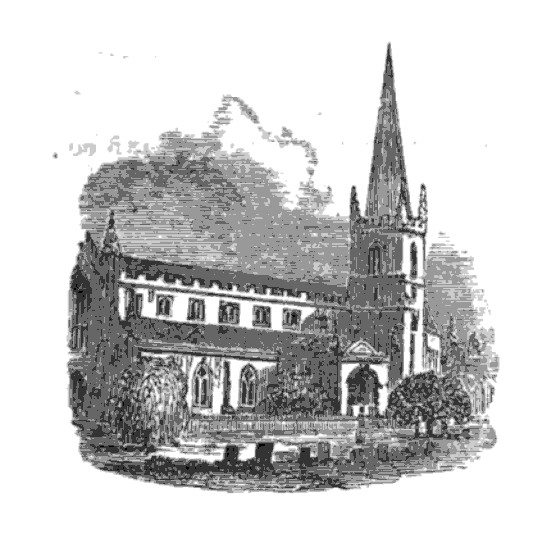 I spent much of the summer in England, and perhaps that prepared me to notice this poem when I happened across it. I found it in an issue of The Churchman’s Companion from 1858.

And can it be the holy round
Of creeds and chants and mysteries,
That from the Church’s watch tower sound,
Speaking in wisdom to the wise,—

Oh! can it be such tones as these
Like death-knells on the coffin fall,
And fail alike to wound or please,
Unmeaning and untuneful all?

‘Tis even so: and ears have heard,
(Alas! and own’d it heard too long,)
E’en the Faith’s own grand symbol-word,
And deem’d it all a cold sing-song.

Yet lurk there in those mystic chimes
The notes distinct of Heavenly power,
Long murmuring low through earthly times,
Ringing out full in God’s own hour.

“Honour thy father:” —round and round
Again in dull monotony
Haply too oft th’accustom’d sound
Recurr’d, and pass’d unheeded by.

One morn it came yet once again,
And came it only to depart?
“Honour thy father:” —found that strain
No echo in the school boy’s heart?

To all it told of parents’ love
Of honour due to parents dear;
To one it told he soon must prove
How sons a widow’s heart should cheer.

‘Twas but one low and gentle stroke,
A mere pulsation of the air,—
But who may think the thoughts it woke,
And who may tell the answer there?

That falt’ring tongue, that brimming eye,
That surcharg’d heart with silent speech,
Tell how the Church’s harmony
Lacks hearts to hear, not sounds to teach.

It’s a melancholy poem in tone, written just past the middle of the nineteenth century and spoken by a pastor who’s getting pretty tired of the fact that England is getting pretty tired of being Christian. The sea of faith was receding from the British shore: Matthew Arnold had already written his famous “Dover Beach,” though he hadn’t published it yet. You could hardly hear the voice of faith anymore over the steady background noise of a lost faith’s “long, withdrawing roar, Retreating.”

But Tomlins does hear something else. It’s a bell. Or rather, it’s the church’s manifold teaching, which, lumped all together, is likened to the ringing of a bell (a word which never occurs, though we get plenty of tones, death-knells, mystic chimes, notes ringing out, low and gentle strokes, and a harmony which sounds from the Church’s watch tower). He hears it falling on deaf ears in the modern history of Christendom, a point he underscores with subtle allusions to Wesley (the opening line “and can it be” is transmuted here from praise to lament) and Calvin (stanza three’s “cold sing-song” is a footnoted swipe at Calvin, whose catty remarks about the Nicene Creed had become, via Keble, a standard Anglo-Catholic horror story).

He hears the chiming of the Christian message ringing out all around everybody for centuries in England, and wonders why nobody else hears it anymore. It fails “to wound or please,” an “unmeaning and untuneful” racket “heard too long” as it goes “round and round in dull monotony” that has “recurr’d and passed unheeded by.”

Will the church’s word go out and return void, without accomplishing what it was sent for? “Came it only to depart?” Stanza after stanza, Tomlins asks some version of this question. The answer is not quite no, because he’s sure that there lurks “in those mystic chimes / The notes distinct of Heavenly power.”

And he tells a little story, a “true incident” of “catechising.” Once upon a time a school teacher proclaimed yet again the Christian command to “honor your father.” The words fell on the outer ears of the school boys, but one boy truly heard them: Because his father was soon to die, this boy heard and was stirred by the call of duty to support and encourage his widowed mother. The words found him.

The final stanza presents a paradox. Someone in that faithless age finally steps up to bear articulate witness to the power of the church’s message, but that testimony is a boy’s “falt’ring tongue,” “brimming eye,” and “surcharg’d heart with silent speech.” In other words, not speech at all, but something deeply felt and acted upon in the domestic sphere.

Tomlins is encouraged by this. It tells “how the Church’s harmony / Lacks hearts to hear, not sounds to teach.” True enough: the message that the church proclaims to the world is in itself articulate and powerful. It speaks “in wisdom to the wise” and rings out “full in God’s own hour.”

But Tomlins’ poem is doing something more specific than transposing Christianity to a sentimental Victorian register (though it is surely busy about that). And though his poetics are unthinkable without channeling Wordsworth-via-Tennyson, he has a more precise doctrinal motive than either of them could have mustered. Tomlins is focused on the church, the established and national church, the Church of England as the bulwark of civil religion and the firm foundation of British life, law, and culture. What he laments is its passing from its position of cultural power, and its declining effectiveness in carrying out its divine mandate as teacher of the people.

And to find such consolation as he finds, he does not quite take the evangelical option of saying that the word of God, “above all earthly powers, no thanks to them abideth.” The transcendental move of Luther is no more an option for him than the same move made by Calvin and Wesley whom he has shunted aside. All of them make a direct appeal to the word of God in Scripture as the Archimedean point, the divine word above the churchy word, under which the church has ministerial power but over which it never has magisterial power. Tomlins’ poem isn’t about that. If you re-read it with this distinction in mind, you can see how resolutely he crafted a poem in which every phrase and symbol is about message and teaching office of the church. In its own way, the poem attains a kind of coherence and completeness by sticking to its topic. To criticize the poem for its failure to direct our eyes any higher than “yonder classic roof” is to indulge in more-than-literary criticism. And that’s what I’m doing.

The moral of the story is that the church’s teaching, and its mysterious effectiveness as an influence on the culture of the world, depends utterly on the transcendent word of God in Holy Scripture, which urgently demands our full attention.