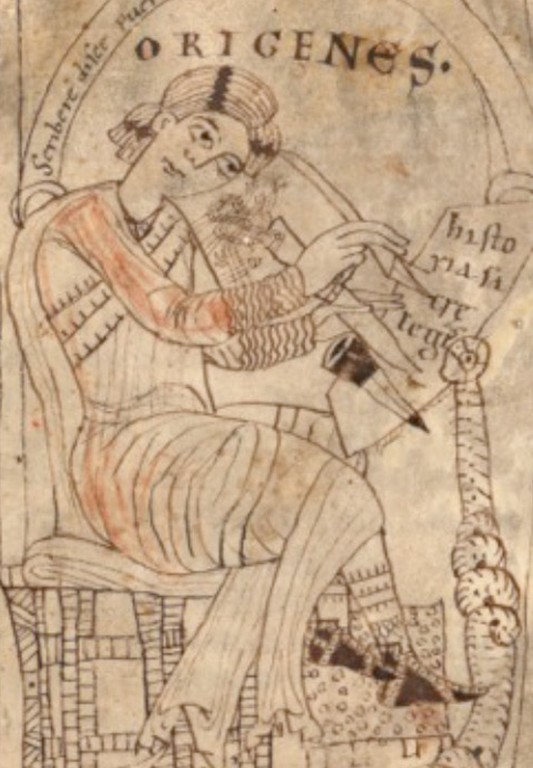 Origen of Alexandria (ca 184-254) apparently coined the word “autobasileia,” meaning something like “the kingdom in person.”

It was in his commentary on Matthew 18, as he was discussing the parable that begins: “Therefore the kingdom of heaven may be compared to a king who wished to settle accounts with his servants.” Origen, who had by this time worked through a number of parables of the kingdom, seems struck by the fact that now, in this one, Jesus compares the kingdom to a king. In fact, what Origen is staring at is the Greek text whose idiom and word order present him with: “compare the kingdom of heaven to a man a king” (ὡμοιώθη ἡ βασιλεία τῶν οὐρανῶν ἀνθρώπῳ βασιλεῖ). This man, a king, who is what the kingdom of heaven is like, can only be one person:

If it be likened to such a king, and one who has done such things, who must we say that it is but the Son of God? For He is the King of the heavens, and as He is absolute Wisdom and absolute Righteousness and absolute Truth, is He not so also absolute Kingdom?

That’s the 19th-century translation. But to see what’s happening in Origen’s Greek, try this: for each of those occurrences of “absolute” you can instead restore the prefix auto- to the noun: autosophia, autodikaiosyne, autoasphaleia, and therefore, “is He not also autobasileia?” The Latin translation offers ipsa sapientia est et ipsa justitia, et ipsa veritas, therefore ipsum regnum. (Here’s a link to the PG pages scanned so you can see the Greek and Latin in parallel columns, but I’m warning you, that Migne printing scanned by Google will make your eyes bleed.)

Because “auto-” takes what the noun is saying and underlines it, refers it back to itself rather than to anything else outside of it (hence the translation “absolute”), and also personalizes it. He, Jesus, is wisdom, but he’s more than that: he’s auto-wisdom, self-wisdom, wisdom itself, wisdom in person: autosophia. There’s not some extrinsic wisdom (or righteousness, or truth) somewhere outside of him that he measures up to. The wisdom is him; he himself is wisdom itself.

What Origen puts together here in the third century is almost a third-person way of echoing the intensity of Jesus’ “I am” statements. On the lips of Jesus, his claims like “I am the bread of life” and “I am the way, the truth, and the life” are not the same kind of identifying statements we normally make. They allude reverently to the divine name (the one that unfolds as “I am that I am”) and set the speaker within it in a way that only this speaker could be. Jesus gathers up biblical images in his teaching, and then as Henri de Lubac says he “sublimates and unifies them by making them converge upon himself.” When a commentator paraphrases “I am the life” to “he is the life,” the numinous intensity necessarily fades. But Origen wants to keep it, so he says “he is auto-life,” he himself is the life, in person.

It’s all pretty heady and Alexandrian, but sober modern Bible scholars have also felt the need to say something similar, precisely because the biblical message demands it. So if you consult the article on “kingdom” by Karl Ludwig Schmidt in the Little Kittel p. 101, you find him exploring many details but summing up the biblical theology of the kingdom this way:

Jesus alone truly fulfills the demands of the kingdom. Hence the kingdom of God is especially linked to Christ… This equation accounts for the once-for-allness of the mission of the Messiah. Origen’s term autobasileia aptly sums up the equation, which also explains why the later NT does not refer so much to the kingdom, the phrase ‘the Lord Jesus Christ’ being in itself an adequate substitute.*

And that explains two things about the New Testament which readers may have noticed: First, it’s why Jesus in John’s gospel replaces all his “the kingdom of heaven is like x, y, and z” statements with a series of “I am” statements. And second, it’s why the explicit theme of Jesus’ message was the kingdom of God, but the explicit message of Paul and the other apostolic preachers is Jesus himself. It’s because he is the kingdom: autobasileia.

(Several classic Greek documents of the Christian faith feature conspicuous “auto- pileups,” if I can coin an unlovely term that sounds like a traffic jam, and often for the same Christocentric effect. Paul uses the word “him” powerfully as a unifying refrain in Colossians 1:18-20; the Chalcedonian definition uses “the same” over and over again to drive home the point that these two natures are the two natures of this one singular person; and John of Damascus makes truly remarkable use of auto- compounds in a key passage of Book 8 of The Orthodox Faith).

*Eschatological footnote: I reserve the right to draw different eschatological conclusions than Schmidt may have in mind, and which may seem obvious to my amillennial friends. And though I know Schmidt’s point is merely grammatical, the word “substitute” is an ugly one here.