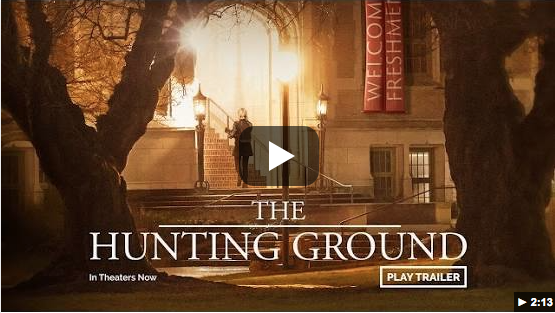 A recent documentary, The Hunting Ground, explores the tragedy of sexual assault on university and college campuses across the nation. Directed by Oscar-nominated Kirby Dick, maker of The Invisible War, which discusses the epidemic of rape within the military, The Hunting Ground serves as Dick’s startling follow-up into the world of sexual assault. The problem is multi-faceted, but the documentary hones in on the role of college administrations in perpetuating the problem. Essentially, universities are caught in a powerful conflict of interests. On the one hand, they claim to take sexual assault “very seriously,” and care for the needs of their students. On the other hand, universities have a deeply vested interest in cultivating their image in the eyes of the public, prospective students and financial donors. Federal law requires universities to report cases of sexual assault, but doing so obviously tarnishes that college’s image. What parent wants to send their students to a school with a long list of documented sexual assaults?

The result? A two-fold strategy. Firstly, colleges consistently and pervasively fail to acknowledge cases of sexual assault, whether by turning the tables and blaming the victims, or by stalling and redefining terms. Secondly, there is not a universal definition for sexual assault across all universities. As defined by U.S. News, Stanford University, University of Chicago and Notre Dame University define sexual assault in the strictest of terms, as opposed to other institutions such as Yale, MIT or Brown. Thirdly, colleges actively support and care for perpetrators and their associates.

I am not qualified to confirm or deny the claims of the documentary, but I found it tragically compelling, particularly in the way that it brought together the stories of victims, administrators, police officers, perpetrators, parents… a host representative of the wide circle involved in such atrocities. While the stories of the survivors dominate the narrative, the picture as a whole is far more well rounded.

As I am processing this assault on my conscience (I am, after all, a member and representative of the university system which apparently has contributed to so much harm), several reflections come to mind.

First, while colleges and universities seem to be to blame, this tragedy runs far deeper. Part of the reason schools are in a difficult situation is that rape is often-times difficult to prove, particularly in a culture rife with alcohol abuse and different forms of sexual identity and expression, including violent forms of sexual activity. This is reflected in the difficulty police forces face in these matters, and the similar challenges facing the judicial system. Because the police and judicial system have difficulty in proving and successfully indicting sexual perpetrators, schools are likewise hampered. This is all the more hampered by the conflict of interest in which universities find themselves.

Second, this by no means exonerates colleges and universities. One of the most damning aspects of the documentary was the way schools impede investigations and fail to offer any support to victims (or rather shift the problem onto them, compounding the shame and injury of the original assault). Additionally, for many victims, the universities’ dismissal of the assault (even the choice to rule it as consensual due to lack of evidence) conveys to them the message that what happened to them is false. A lie. That they imagined it or are being too sensitive. Schools do not simply share the plight of the police and judicial systems—they exacerbate it. The particular care big schools take to shield their athletes is a particularly damning bit of the narrative, and the way the public harshly and blindly favor their cherished sports programs (and vilify anyone evil enough to accuse the of any wrong-doing).

Fourthly, this documentary really exposes a host of related problems: 1) care and support for survivors, 2) care, support and repercussions for perpetrators, 3) the need for university faculty and staff to be educated as to report and handle sexual assault, 4) the need for a universal definition of sexual assault and consent 5) the need to educate college students, particularly women, about those factors which make them vulnerable to sexual predators, 6) the disastrous effects of alcohol within the university culture, which is a key factor in this problem, 7) the guilt of those who fail to support, or even blame, victims of sexual assault, and 8) the desperate need of our country as a whole to grapple with the problem of sexual assault, the forces which enable it, and how to appropriately handle accusations of sexual assault where distinguishing consensual sex from assault cannot be determined in conclusive ways.

The Hunting Ground exposes a tragedy within our culture. Sexual assault wreaks havoc on the lives of women and men, not to mention the disastrous consequences within the lives of the perpetrators and those who support them implicitly or explicitly. The damage to one’s identity, beliefs and emotions that must be in place to perpetrate such crimes as these are catastrophic. Our culture must face these issues, helping and holding accountable those enmeshed in such perverse and damaging patterns of behavior. We must love and care for the survivors, help fewer men and women be forced into their ranks, and care for and properly prosecute the perpetrators.

I highly encourage you to watch and discuss The Hunting Ground, especially if you are involved in or will soon be entering the university system. It is a beautifully told story, and one to which we must attend.