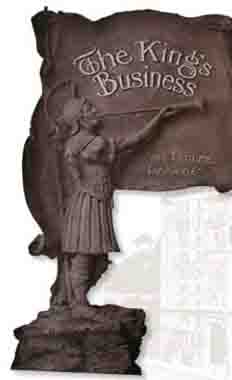 Several years ago, I headed up a project that put ten years of the old Biola journal The King’s Business online. That means that anybody interested in Biola’s early history (1910-1920), or conservative Protestantism, or California religion, can read these otherwise hard to find issues firsthand.

The site has been down for a while, but we recently got it functioning again, so please go check it out. There is some great material in that decade of Biola publishing, along with some quirky stuff, and plenty of fascinating sidelights on life in Los Angeles in the early twentieth century.

Here are a couple of endorsements of the King’s Business archive project from important historians:

“Bringing the early issues of The King’s Business online is a boon to historians of American religion and culture.” –Philip Goff, director of the Center for the Study of Religion and American Culture at Indiana University Purdue University Indianapolis

“Everyone who wants to look at fundamentalism as a national movement, and certainly as a force on the West Coast, should be reading The King’s Business.” –Joel Carpenter, Director of the Nagel Center for the Study of World Christianity at Calvin College and author of Revive us Again: The Reawakening of American Fundamentalism

Go read! I think the King’s Biz is a wonderful mix of strikingly relevant material with bizarrely antiquated goodies.

And now for a tangent:

People sometimes ask why the journal was called The King’s Business instead of something like “Biola’s Magazine” or “Christianity Today.” I think there are several reasons for the name. The most immediate, as is clear from page 1 of issue 1, is that Biola’s founder was a businessman, and he thought “doing business” was a good metaphor for the seriousness, hard work, and high sense of purpose that were fitting for Christians. Oilman Lyman Stewart could say with full conviction, “Our Lord was a business man… what ceaseless energy was manifested by him.” In the parable in Luke 19:13, the master goes away and gives his servants money, instructing them “do business till I come” (Other translations say “occupy,” but the Greek word here is pragmateuomai, get busy and do stuff).

So the word “business” conjured all kinds of good associations for the founders. But the actual phrase, “The King’s business requires haste” is from 1 Samuel 21:8-9. The story there is of David fleeing from Saul, seeking shelter in the priestly city of Nob. He asks Ahimelech the priest for food and then for weapons, saying,

Is there not here under thy hand spear or sword? For I have neither brought my sword nor my weapons with me, because the king’s business required haste.

The whole thing is a rich read; in context, what David is saying is “Hey, I need a sword, you got a sword? Because I was in a hurry when I left, because the king gave me an important assignment and I took off right away. You’ve got to work fast when you’re working for the king, so I didn’t bring a sword or any bread, so give me whatever you’ve got in the temple.” But it seems like the king’s real business is to kill David if he gets his hands on him.

As a catchphrase, though, it struck just the right note for industrious evangelicals like the founders of Biola. They were on the King’s business, and in a hurry to get things done. I think they could reasonably expect that their readers would see the title “The King’s Business,” and mentally auto-complete it, “Requireth Haste!”

How long have busy evangelicals been saying this kind of thing? At least since 1910, when they named the journal.

At least since 1880, when Hudson Taylor said it about the evangelization of China.

At least since 1780s, when John Wesley would exhort his preachers using the phrase. In fact, the text from 1 Samuel is the second-to-last sermon Wesley ever preached.

It may go back further than that, but at the late eighteenth century, I lost the trail. For all I know, Augustine of Hippo talked this way, too. But I suspect it’s a distinctively evangelical usage.