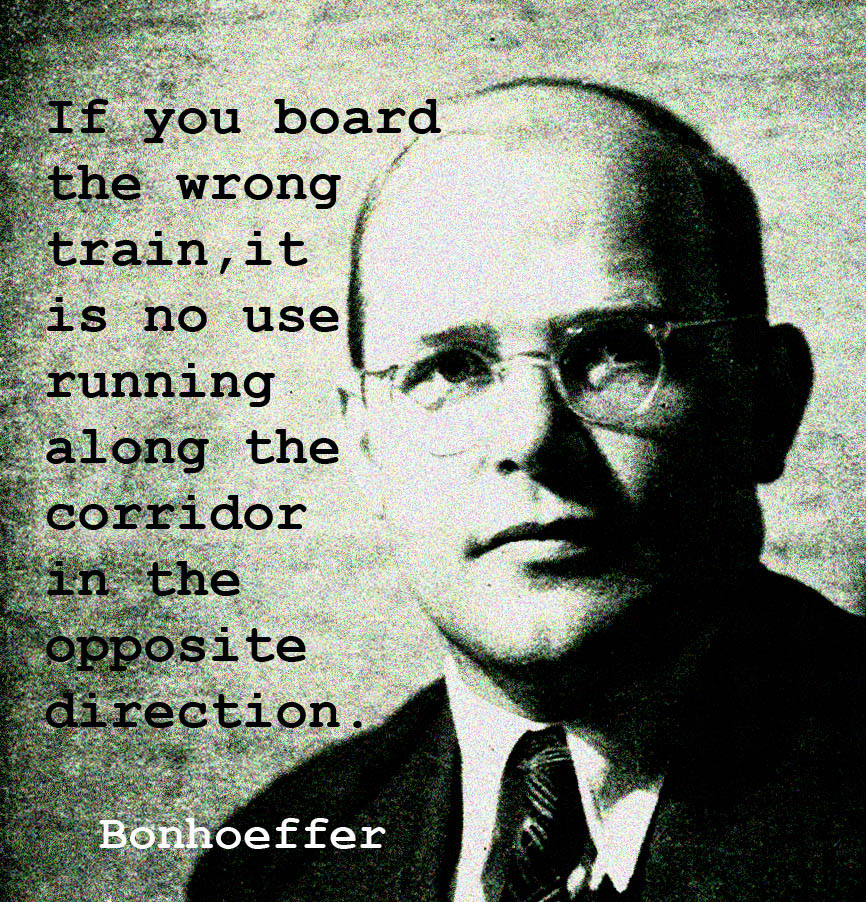 Dietrich Bonhoeffer (born 1906) was executed on this day, April 9, in 1945. He had been involved in a plot to assassinate Hitler, and was hanged for that political action.

He was plotting murder and got caught; there were non-Christians undertaking the same action. His death is hardly the stuff of straightforward martyrdom, hardly as clear a case as the Christians of Rome being burned at the stake for honoring Christ above Caesar. Bonhoeffer’s death has nevertheless been widely acknowledged as a true martyrdom, a costly confession of the lordship of Christ. Craig Slane has made the most extensive and careful case for the death of Bonhoeffer as martyrdom rather than simply collateral damage of political involvement, in his book-length treatment of Bonhoeffer’s thought. Slane’s case hangs on the way Bonhoeffer’s life, teaching, and death belong together as parts of one single message. Eric Metaxas wove this theme into his best-selling biography of the theologian (not an oxymoron, it turns out), Bonhoeffer: Pastor, Martyr, Prophet, Spy.

Bonhoeffer’s witness has summoned great writers to respond with attempts to say what they have glimpsed in the death of this theologian. W. H. Auden wrote an oblique 1958 poem called “Friday’s Child,” long on metaphysics and short on biography, but clearly dedicated “In memory of Dietrich Bonhoeffer, martyred at Flossenburg, April 9, 1945.”  A couple of memorable stanzas from it:

Meanwhile, a silence on the cross,
As dead as we shall ever be,
Speaks of some total gain or loss,
And you and I are free

To guess from the insulted face
Just what Appearances He saves
By suffering in a public place
A death reserved for slaves.

Marilynne Robinson, now justly famous for the prize-winning novel Gilead, published an essay on Bonhoeffer in her collection The Death of Adam. Every page of the short essay deserves study, but here is Robinson’s account of Bonhoeffer’s habitual way of being for others:

It is striking how Bonhoeffer insists always on the role of disciple, of one among a company of equals, from which no one must be excluded. Though he was an aristocrat and aloof in his manner, he seems to have had no imagination of beatitude which is not a humanly understandable moment with a beloved friend. … Neither has he any interest in himself as a solitary martyr. He generalizes from his circumstance to the human condition with a consistency that leads commentators to forget how extreme his isolation really was, and how available the idea of martyrdom or abandonment would have been to him, if he had not always transformed his suffering into compassion for humankind, or for God. It is not hard to imagine what dark night might have preceded words like these: ‘The God who is with us is the God who forsakes us (Mark 15:34). The God who lets us live in the world without the working hypothesis of God is the God before whom we stand continually. Before God and with God we live without God. God lets the divine self be pushed out of the world onto the cross.”