Johannes Heinrich August Ebrard’s 1860 Commentary on First John is a bit florid and romantic in tone, not really well aligned with current literary sensibilities in the biblical-theological guild. But if you can handle the purple of the prose (and really it’s no worse than Spurgeon) it is also a powerful, sustained piece of theological interpretation of Scripture.
Ebrard was a professor of systematic theology at Erlangen, who wrote in a rather astonishing range of fields: he published a two-volume Dogmatics, volumes of apologetics, Bible commentaries, liturgical studies, poetry, historical novels written under a pseudonym, and (this is not a joke) a handbook of the Gaelic language. So we might say he didn’t come to the interpretation of First John from a narrowly specialized Biblical Studies mindset.
Ebrard worked the material of First John diligently, convinced this letter had a distinctive message that deserved a very careful hearing. One of the ways Ebrard brought out the singularity of First John was to compare his apostolic voice to those of Peter on the one hand and Paul on the other. 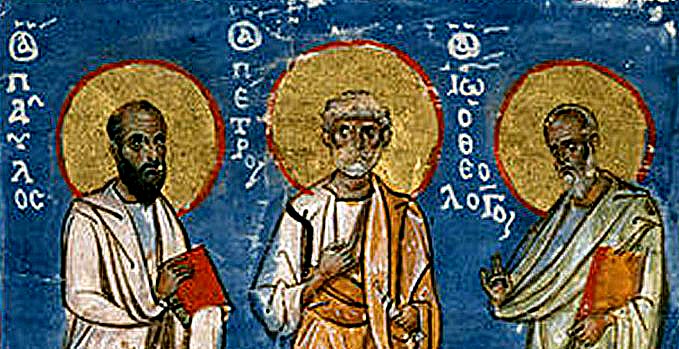 Here is Ebrard’s comparison of John to Peter:

As compared with St Peter, St John exhibits to us a calm and reflective nature, with a preeminent receptivity: every word of his beloved Master, which tends to solve to his heart the mystery which he pondered, he apprehends in his deepest soul, and holds it fast, and meditates upon it, blessedly losing himself in the contemplation of the glory of the Son of Man. In relation to all that Christ speaks or does, he does not seize the element of practical conduct ; he does not ask, “What shall I do? shall I build tabernacles upon the Mount of Transfiguration? shall I draw my sword against Malchus?” but, far from feeling the pressure of action and co-operation, he loves calmly to contemplate what passes, and asks, “What is this that He doeth? what is it that He saith?” He was lost in the pondering, affectionate contemplation of Jesus, as a bride in the contemplation of the bridegroom; in the most profound and purest love, he sank into the person of his Master…

Prosaically we could say John had a good memory. But Ebrard sees in John the ability to take in, register, and document the living truth of Jesus Christ in a way that went far beyond mechanical recording; he heard Jesus with his whole soul:

And thus it is to be explained that in the soul and in the living remembrance of this disciple the very character of our Lord, in its most fine and characteristic traits, was retained so clearly and unconfusedly….

All the supreme and preeminent glory and dignity of Christ, which is exhibited in the Gospel of St John, did not certainly remain concealed from the rest of the disciples ; but only St John was capable of being the instrument of reproducing the exhibition of it. Every man may see the ineffable beauty of an Alpine scene under the setting sun ; but not every man can paint it.

Despite the allusion to the art of painting, Ebrard doesn’t actually want to call John an artist. Artists add and subtract in order to craft an aesthetic whole, but John gives us Jesus without the attempt to bring him into that kind of regularity and order:

St John had the nature of a living mirror, for this is the talent of a true observer : not to overlook the most minute trait, and to place it in its right position in the connection of the whole. But then St John was only an observer, not a poet or inventor. The first requisite of an inventive poet –the art of rounding, and ‘making an artistic whole out of, the things narrated– is altogether wanting in him. Plainly, and altogether without artificial attractions often, it might seem, wearisomely, he faithfully gives back ” that which he had seen and heard.”

The contrast with man-of-action Peter may seem too obvious. Ebrard goes on to a comparison with Paul:

In inwardness, St Paul is much more like St John than St Peter is ; but it is another kind of inwardness :

in St Paul it is dialectic, in St John purely contemplative.

St Paul directs his regards to the appropriation of redemption, St John to the Founder of salvation ;

St Paul to conversion, St John rather to the fulness of life in Christ.

Though some of his characterization tends that way, Ebrard won’t let Paul be the intellect and John be the heart. He works to distance John from the softness of the “apostle of love” label: “St John has even been regarded by many as a sentimental man of feeling, and he has been painted as a youth with soft and effeminate features ; but thus his, personal character has been most egregiously misconceived.”

John, after all, was the man of stark antitheses, even dualisms:

He had no mind or sense for relativities and mediating modes; and hence was not a man of middle courses. The ground of this, however, lay, not in a vehemence of his natural temperament, but in the peculiarity of his mystic-contemplative and deep insight, which everywhere and always pierced through to the last extremes. Irenseus relates, as received from Polycarp, that St John, when he once met the Gnostic Cerinthus in a bath, instantly left the place; fearing that the building would fall down in which such an enemy of the truth was found.

Even in terms of “natural temperament” John was “a man who was altogether that which he was; a man who could only have been altogether a Christian, or altogether a devil.”

Ebrard may venture a bit far in his portrait of John, but it is a very suggestive portrayal. At his best, Ebrard brings out Johannine ways of talking and framing topics that pay off in the details of exegesis throughout First John.