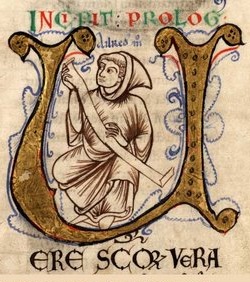 On January 12, 1167, Aelred died. He was the abbot of the Cistercian convent in Rievaulx in the north of England.

He once met the famous Bernard of Clairvaux, who asked him to write a book on love. Aelred wrote the Mirror of Love and also a treatise on Spiritual Friendship. These are well worth reading. Aelred wrote so movingly on the subject of friendship that his books have been popular through the centuries, and the treatise on Spiritual Friendship has been making something of a comeback in recent decades. Aelred was celibate and promoted celibacy outside of marriage and chaste sex within marriage. But because of the burning passion with which he wrote on friendship, he has been adopted by various homosexual groups as the patron saint of same-sex love. That is an unfortunate re-contextualizing of Aelred’s work, which is a kind of Christian reinterpretation of Plato’s Symposium. What Aelred has is a whole theology of kissing, in which you first experience the sweetness of a kiss, but come to realize that if you pursue that spark of sweetness properly (rather than through the various ways you can get in trouble with kissing), you will come to be united with the ultimate source of sweetness and affection: God.

Whether you sign on for his whole theological account of kissing or not, Aelred is a great source for quotations about friendship. No wonder Bernard of Clairvaux asked him to write on love. One of the most famous quotations:

Friendship is that virtue by which sprits are bound by ties of love and sweetness, and out of many are made one. Even the philosophers of this world have ranked friendship not with things casual or transitory but with the virtues which are eternal. Solomon in the Book of Proverbs appears to agree with them when he says: “he that is a friend loves at all times,” manifestly declaring that friendship is eternal if it is true friendship; but if it should ever cease to be, then it was not true friendship, even though it seemed to be so.